So, while Bodie is mostly caught up developmentally, he still has a few areas his physical therapist is working on with him:

(1) Going up and down stairs with no assistance.
He's VERY close on this - does it some, but not all of the time yet.

(2) Not falling down so much.
Yeah, good luck with that one. I keep trying to blame it on his genes, but his therapist isn't buying it - I don't know, I think she just doesn't appreciate how strong the Gerrish klutziness gene is. You'd think she'd get it, given that I had a broken foot when we met because, at 35, I fell flat on my face just walking across the street. Hmmm..Maybe I should introduce her to my mom, the one we blame for starting the whole klutzy gene. But I digress.

(3) Running.
Up to this point, Bodie has mastered the lumbering speed walk. It's not that noticeable, because he does move very fast. But if you put him next to a typical kid his age (or heck, even younger), you can definitely see that he does not have the same ease of movement when he moves. And put him next to his younger cousin Michael, who literally prances effortlessly when he runs (it's SO cute) and he looks like a sumo wrestler lumbering along. It's pretty funny, actually. But his therapist has been working with him. How, I'm not exactly sure. I think mainly strengthening his core and increasing his confidence in letting go enough to run.

So, yesterday the kids and I were at McDonald's and the kids were standing together looking at the toy display while I was paying. I wasn't holding Bodie because I just threw my back out and while wearing  a brace helps me to do basic stuff like driving, walking and holding Bodie for short periods of time without being in excruciating pain, it doesn't allow me to hold him long at all. So, as I am handing my money to the cashier, I see Bodie saunter nonchalantly over to the door. I'm not thinking much of it since the doors are really heavy, and I'm thinking I have time to get my change back, put it in my wallet and then get him. But then I see him open the door and I realize (1) the kid is stronger than I give him credit for and (2) I'm in trouble.  So I head over toward him, calling him back to me.

The kid takes one look at me and RUNS outside. I mean, we're talking full out sprint. An, Oh My Gosh, I better run to keep up with him kinda sprint. We ended up in a race to see who could make it to the parking lot first. He won. Just as he was setting his foot off the curb and into the drive through lane, I swooped down and grabbed him. It's true what they say - adrenaline does kick in when you need it. I was totally able to sprint after him, thrown out back and all. But lemme tell ya, once the adrenaline was gone, my back was NOT happy with the effects of said sprint. ;-)

I'll be honest - I'm THRILLED that Bodie is running now. Praise God! But seriously, did he have to demonstrate it that way? Couldn't he have, I don't know, ran across our back yard?!? Oh wait, no, he's Bodie. That's right. This is how he rolls. Bodie style. Always has to call the shots.

Ah well, at least he rewarded me by eating 5, yes 5, chicken nuggets. Approximately 5 times his usual fare there. 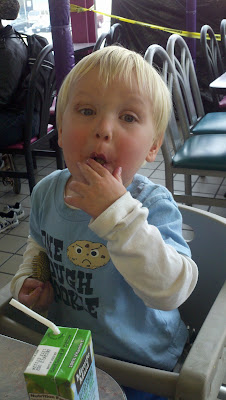 (And yes, I know McDonald's is gross and those 5 chicken nuggets will be sitting in his intestines in the exact same form in 2 years (yes, I've seen the Facebook video), but well, ya gotta choose your battles, and today I'm choosing to be happy that my little man RAN and ATE. Little blessings!)