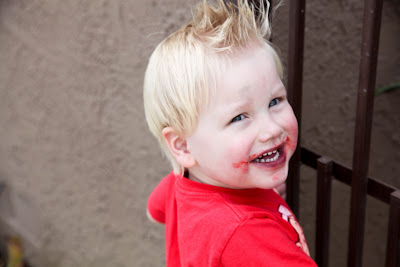 I cannot believe our sweet, crazy, nutso boy is really 3!!! It really just seems unreal to me. What a milestone for our little man.

We celebrated with a party this past weekend and boy did Bodie have fun! I have to say, it was not my most creative all out birthday bash I've ever done, but, after the week we had, the fact that we had a party at all was kind of a big feat. :-) I was actually going to say the fact that we all showed up, fully dressed and with teeth brushed was a big feat...but, well, given that Bodie was literally running down the street with nothing but a tee shirt on, chasing a ball, when the first guest arrived, that statement would only be half true...)

And, speaking of that first lucky guest, I have to give a HUGE shout out to the incomparable Brenda Munoz, who did all of our photography you see here of the party (and who, you know, didn't turn around and get back in her car and drive away upon arriving to see the guest of honor streaking down the street). She's so awesome that we'd have invited her anyway as a guest, but we got extra lucky to benefit from her mad photog skills while we were at it! Local So Cal peeps, if you're looking for a phenomenal photographer for a special event, or even just amazing family photos, we cannot recommend her highly enough - check out her website at www.bmunozphotography.com

Anyway, streaking and photography props aside, we went pretty low key on decorations - not intentionally, but given that somehow all 3 of our local grocery stores, Party City and the 99 cent store were either out of balloons, helium (apparently, there is a nationwide shortage - who knew?) or anyone who could actually figure out what the term "balloons filled with helium" meant, we ended up having to go sans balloons. So, the decorations ended up being just tableware and veggies. Perfectly fitting for our veggie and VeggieTales obsessed little man. 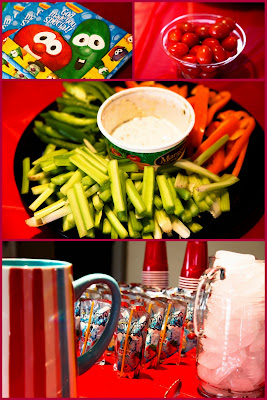 The lack of balloons definitely made for a pretty sad Bodie, but once he saw his first gift, he forgot all about it.Man, this kid was INTO gifts this year. 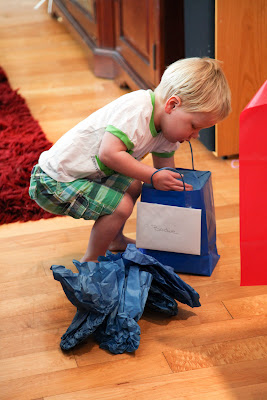 We thought it was so cute how excited he was to see the first guest - until we realized that it was ONLY because he was excited about the present in their hand! He tore it out of their hands before they were even over the threshold and ripped it open immediately. Uh...you know this OCD mom immediately put a stop to that, putting all remaining gifts well out of reach until gift opening time! 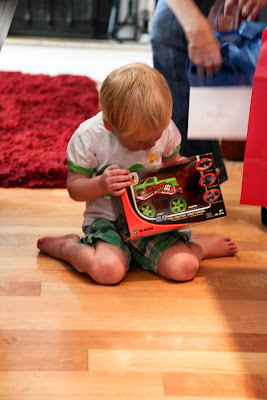 Although we skimped on decorations, I did my best on the favors and cake. 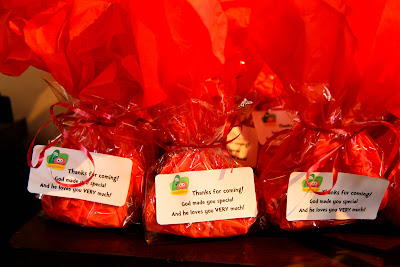 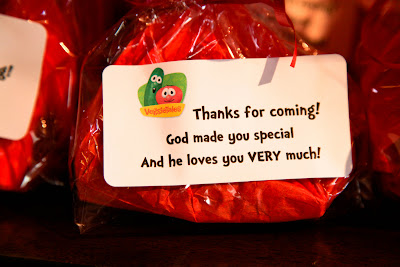 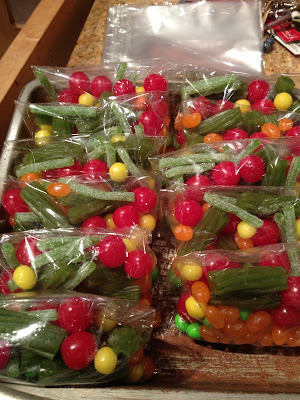 And the cake - it looked sort of like Bob and Larry from VeggieTales. 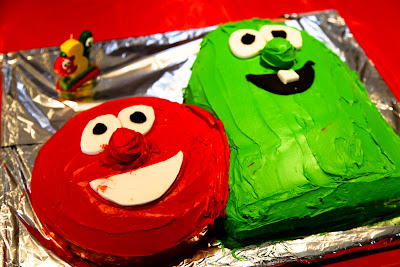 Luckily, Bodie was a much easier audience to please and literally squealed with delight when he saw Bob, Larry and the minion of French peas, all of which had different expressions. 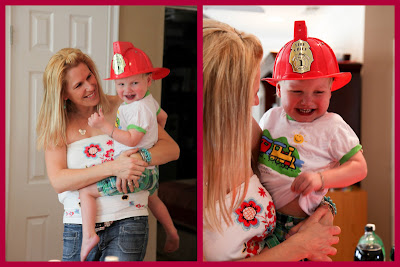 We thought it was a great idea to put him on the table to take a pic with his cake. 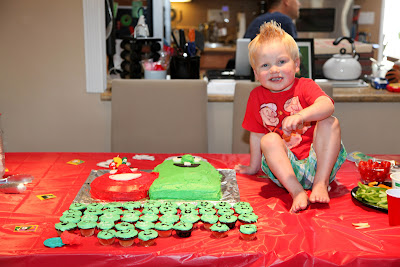 So did he. He literally was beside himself with excitement trying to touch it. It was hilarious. 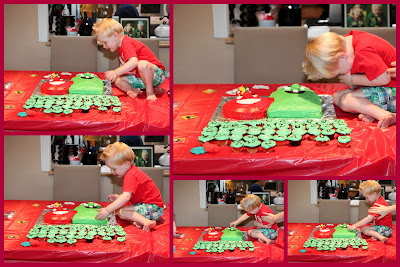 As an aside, I totally didn't realize how filthy his feet were until I saw the pics afterwards of his feet, you know, inches from the food. Mom fail moment for sure.

We got a good family shot though, which was awesome. 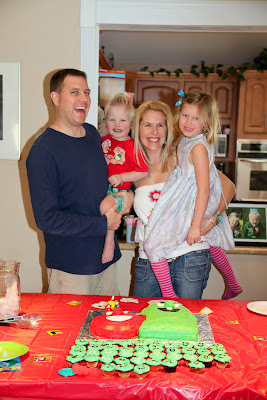 And yes, Sierra is wearing last year (as in, 2011)'s Christmas dress, with crazy pink tights and a turquoise bow in her hair. Didn't say I was proud of it. Whatev. I got bigger fish to fry these days. Again, we're all wearing underwear, so hey, it was a successful picture. :-)

And, one of my favorite moments - we got a pic of all of the heart kiddos there (and there would have been more if our buddies Ella and Michael didn't have to bail at the last minute for illness - gotta love cold and flu season!) - Bodie, Townes, Grace, Barbara and Lucas. Townes, Grace and Lucas all have HLHS like Bodie, and Grace is heading into her Fontan this summer as well! Barbara was one of Bodie's first roommates after his Norwood and we take such joy in hitting up each other's birthday parties each year. :-) 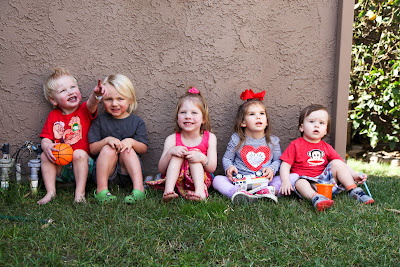 There are just SO MANY THINGS I love about this picture. How about, for starters, the fact that these kids have had 14 open-heart surgeries among them? Or that they live totally typical lives now? Or that Bodie is holding a basketball, pointing out something to his buddy Townes, just like typical kids. Ah, how this pic gets me all misty eyed. You are amazing, Brenda. THANK YOU for capturing this moment!
Happy Birthday, little man. We are SO unbelievably proud of you. Setting aside your distaste for underwear and apparent inability to figure out how to put them on yourself (seriously, asking you to put on underwear is NOT the equivalent of asking you to figure out world peace), you're really turning into the most incredible little dude. You are SO funny and silly (one of Sierra's best friends was over last week and was with you for a bit while Sierra was in time out and all she could say to me was "Um, Sierra's mommy? Bodie is REALLY funny!") Seriously, dude, you are. You have a magnetic personality and people are just drawn to you. You make all of this, everything it takes to love you and to live in this scary, uncertain CHD world, 100,000,000% WORTH IT...and then some.  Your love for Jesus absolutely astounds us and every time you talk about Jesus or Heaven out of the blue we are reminded again how God is already using you to change people's lives, which has always been our greatest prayer for you.

We are so so lucky to be your parents, Bodie. We are so scared for the year ahead, but so excited at the possibilities that lie ahead for you. WE LOVE YOU. Happy Birthday to the bravest little dude we know. Thanks for continuing to inspire us every day.