If you're Facebook friends with me, or a relative of ours, you probably heard that we were robbed earlier this week. Our (extra thick double planed plate glass) bedroom window was broken and our bedroom was ransacked while Dusk and I were at work and the kids were at school. They stole my jewelry box (which really didn't contain much of monetary value (I'm sure they were super bummed when they tried to pawn it only to discover that most of it was purchased at Claire's! That's karma for you!), but definitely a LOT of sentimental stuff (including Dusk's late mom's jewelry) and Dusk's work laptop; and they took our safe, which was bolted to the wall. They literally tore the safe right out of the wall, leaving holes behind. The icing on the cake was when we went to sleep that night and discovered our pillow cases were missing, clearly used to carry our stuff out with. As our friend Matt so perfectly put it when we really needed a dose of humor "what kind of broke thieves don't even have their own thief bags???"

Nothing else in the house was touched, including my laptop which was in plain view on the dining room table, which leads us to believe that they were probably still here when the kids and I got home and we unknowingly scared them off. (When the kids and I got home, we were in the front of the house for probably 10 or 15 minutes before I went back to our bedroom to grab something, which is when I realized what had happened). TERRIFYING for me to think what would have happened if we had come in when they were, say, in the front of the house. Jesus was watching over us for sure.

We are obviously completely unsettled by the entire experience and poor Sierra is probably the most traumatized, poor baby. I am BEYOND grateful that God was watching out for us and we didn't actually see anyone in the house, no one was hurt, they didn't touch the kids' room, etc. But the experience of knowing someone broke into your house and went through your belongings is am unsettling one. We covet your prayers as we settle into the aftermath of an event like this, of our security being compromised, our safe place not feeling quite so safe. Bodie's fine and doesn't seem affected by the whole thing, thankfully. I know Sierra will be fine (Dusk and I are fine - I mean, I have PTSD from it, but c'mon, at this point, I'm really just throwing it onto the crapload of PTSD I'm already carrying from the last 3 years, so really, what's a little more?), but we appreciate your prayers to get Sierra through this.

The silver lining (if you've been reading my blog for any period of time, you know I'm the kinda girl who is squinting her eyes through the thunderstorm trying desperately to find the silver lining) is that it's given us a LOT of opportunities to talk to the kids the past few days about how unimportant "stuff" is, how this was annoying, and frightening and yes, we're allowed to be angry about it. But, at the end of the day, it's just stuff. If money can fix it, it's really not that big a deal. And our "security" doesn't ever come from things in this world anyway, but in the security that only Jesus can provide.

We're ok. The kids are ok. The rest is just details. 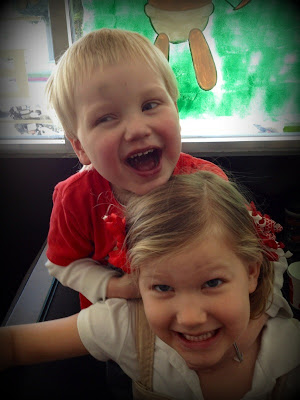 And today, on Valentine's Day, that's a lesson I'm totally ok fully embracing. And, to be honest, one of my goals this year was to declutter and live a little more simply. But, I was sort of envisioning being allowed to be an active participant in the process of deciding what we were getting rid of!