Tahoe 2013...the one where Bodie pushed back

Our approach to parenting Bodie has always been "we push him until he pushes back." Last week, for the first time ever, Bodie pushed back. And it scared the crap out of us. 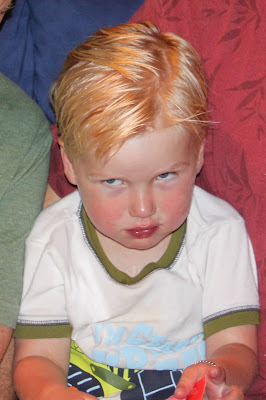 Tomorrow, we'll be making the long trek home from our annual family vacation to Tahoe. All is well. But it wasn't quite the super relaxing trip we had envisioned.

I'm a big fan of spinning things in a positive light, but I have to say, although there were a lot of GREAT things about our Tahoe trip (which I'll post about in my next post), I'm also a big fan of getting the bad news out of the way first - so here it goes.

Tahoe was TOUGH this year.

As in, the least relaxing, most stressful and most frightening vacation either Dusk or I can remember having ever taken. Let me tell you, taking a hypoplast thisready for the Fontan to altitude so close after an interventional cath is NO JOKE. To be honest, we're not sure why exactly Bodie struggled as much as he did - but struggle he did. We have lots of theories - (i) he's just too close to needing his Fontan for his hemodynamics to shrug off the altitude like he has in years past, (ii) he was likely anemic coming off the cath and his body hadn't replenished his iron levels yet, (iii) his good old pulmonary hypertension kicked in, (iv) his asthma kicked in, (v) he was coming down with a cold, (vi) his body didn't like sitting at heartrates almost double what they usually are (his heartrate was sitting almost continously in the 130's-140's during the day (confirmed EAT via holter) - not a dangerous level for a kid his age by any means, but definitely not what his body was used to), (vii) some combination of the above, or you know, (viii) he's a kid with half a heart used to sitting at sea level and we were asking him to be comfortable at 6,000ft+.  Who knows.

All we know is that he was struggling, particularly during the first half of our trip.

Struggling in the form of a consistently high heartrate, low sats, very poor coloring and finally decreased energy levels. Really low sats, as in sitting in the 50's coming over the pass and hanging in the low 60's when we first got up to Tahoe (yes, heart moms, you read that correctly - for reference, he's usually in the high 70s to mid 80's). After a mapped out route to the closest ER and a frantic call to Bodie's cardiologist, since Bodie's activity level was still surprisingly GREAT, we were given the greenlight to stay up there, increasing both his beta blocker and his pulmonary hypertension meds (he was on pretty low doses of both). That helped - although he was still blue and winded, his sats came up, his energy continued to be great and we were able to stay up in Tahoe...for 2 days. Until he woke up on Monday morning, not acting like himself. Was still playing, but not quite as much - and not eating much at all. When he woke up from his nap with sats in the low 60's and really lethargic (TOTALLY unlike Bodie), we made the decision to come back down to Reno (1,500ft or so less in elevation).

I have to say, making that unplanned decision to quickly pack up and head down the hill was one of the scariest moments of parenting Bodie. I was worried we were headed for an ER trip (at a hospital we weren't familiar with, no less). I felt like we were back in interstage again (pre-Glenn, where the highest mortality level is for hlhsers). Even though we've always known having to leave Tahoe early was a possibility, it was also one of the most defeating moments. We work SO hard to make Bodie's life as normal as possible, so to have to completely adjust our vacation plans like that really hit home how fragile he is despite how strong he seems.

But the drop in altitude did him wonders. Within hours of getting down to Reno, he was acting like himself again. I didn't even realize until he started talking everyone's ear off at dinner that he had hardly talked all Monday morning up in Tahoe. It was definitely the right call to bring him down to Reno.

After that, we split our time more evenly between Reno and Tahoe - spending a day or day and a half at a time up in Tahoe and then heading back down to Reno. That definitely worked better for Bodie's body - it gave his body time to adjust. And we were able to have a great vacation in spite of the slight change in plans.

After this trip, I honestly understand why some cardiologists simply don't let their single ventricle kiddos go to altitude pre-Fontan. It was SCARY. We don't regret going (Bodie had an awesome time, as did Sierra) - only that the whole vacation aged Dusk and I a good 10 years. Not exactly what we needed heading into the Fontan! ;-)

1. We continue to be SO incredibly grateful for a medical team that cares so deeply for Bodie. A cardiologist who put up with numerous phone calls and texts from me last week, and who was willing to adjust Bodie's meds on the fly so that we could still enjoy our family vacation. And an electrophysiologist who was making phone calls and sending emails out about the best way to manage Bodie's care at 6pm on July 3rd. I cannot express in words how impressed I am by his medical team, who continue to go above and beyond in their care. We are SO SO grateful for them!

2. We are also super grateful for Grandma Jan and Popo Alan, who thought they were getting us for a few nights - and unexpectedly got us for the better part of a week! And never complained about the kids running through the house, eating all their fruit and making messes everywhere! THANK YOU - we never could have done this trip without your loving flexibility!!!!

3. After watching our son struggle to breathe and keep up like we've never seen him before, we are READY for the Fontan and the new lease on life it promises. To the Fontan, we say bring it.

Stay tuned tomorrow for some awesome pics from our vacation!