When the little things aren't so little...

Bodie has complained a handful of times over the past month about his belly button hurting. He has the most sensitive skin on the planet. Seriously. And belly buttons are just weird and sensitive anyway. So we figured it had just rubbed on his clothes and didn't really think much of it.

Until yesterday, when he REALLY started complaining that it hurt and it started getting red. Uh oh. My ptsd laden mind went immediately to Eli's story, how his pacemaker infection went away and then came back 3 months later. All I could think was about was the proximity of his belly button to his pacer and "is that the pacemaker infection? is it coming through his belly button?" Needless to say, I was pretty unsettled.

So today we went to his pediatrician, who said he could't tell whether it was infected or just irritated, but that he thought we should have the CT team weigh in. So, a picture and 2 phone calls later, we had the directive from CT surgery that they wanted to see Bodie today. So, I packed a bag (fully expecting to be admitted), picked both kids up early from school and trekked the 90 minutes from Venice to Hollywood. Yes, 90 minutes to go 13.93 miles. After that drive, let's just say I totally get why people have road rage. Gotta love LA.

When I was driving and my thoughts weren't drowned out by Bodie's "I didn't take a nap so I'm therefore going to be pissed at everyone and everything that is not going EXACTLY as I wanted" screaming on said 90 minute drive, I was remembering the last time we drove up there for the CT team to "take a look" at a potential pacer infection. I was thinking about how that visit ended with an admission, a picc line and 6 weeks of iv antibiotics. My mind was absolutely going through the worst-case scenarios. Ptsd much?

The NP and the surgeon both looked at it and the general consensus seems to be that it's not related to his pacemaker (in layman's terms, the kid probably shoved a dirty finger into an itchy belly button to scratch it and infected it). Thanks a lot, Bodie. But, because he IS Bodie and because this IS a pacemaker we're talking about here, they wanted to be conservative (heck yeah, we're so totally down with that!), and start him on a short course of oral antibiotics. And we're to bring him back if it looks like it's getting worse, he starts running a fever, etc.

Thank God it didn't result in an admission and thank God we didn't have to have discussions about how deep this infection could possibly be and the implications of that. We're feeling very grateful for that tonight.

But it struck me, as I was driving home, how hard this life with a CHD kid is sometimes. Most of the time, the little things for typical kids are also little things for Bodie - a cold, an ear infection, a random virus. Whatev. He takes a licking and keeps on ticking. He's tough. But then, I find myself unexpectedly driving like a madwoman through the streets of LA racing up to CHLA for an irritated bellybutton??? and I am reminded once again that Bodie's life will always be a little different than his peers. And that makes me sad.

Apparently, I'm the only one hanging at this pity party. 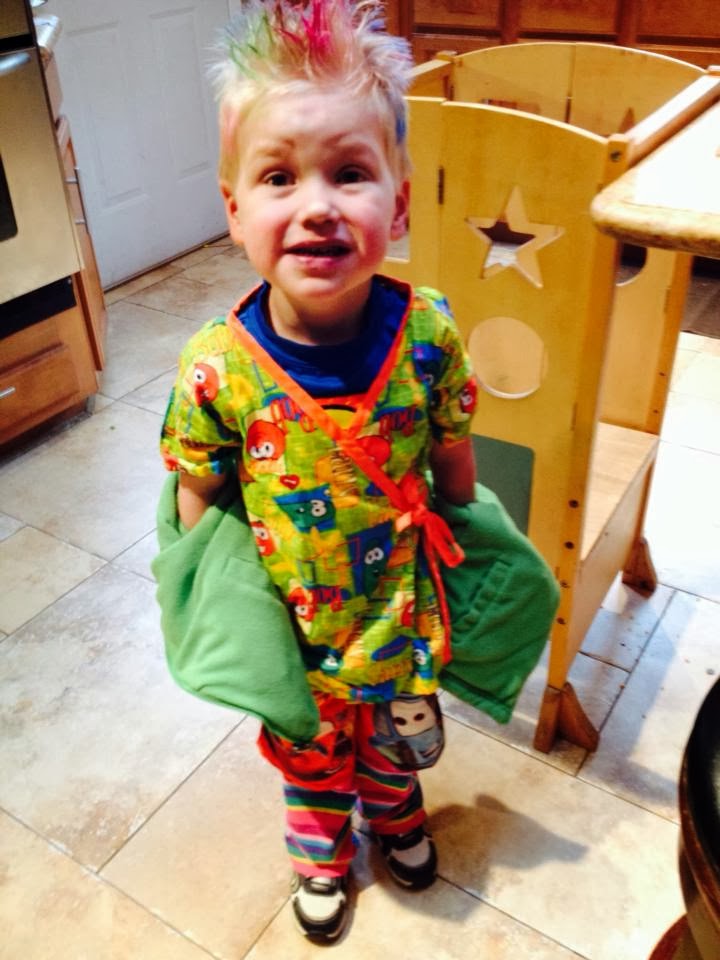 Cause this kid, he ain't got time for pity. He's too busy living and loving his life.

Thank God for that.

Tonight, please pray for continued resilience for Bodie. Please pray that this is just a silly belly button thing, and not an indication that his pacemaker infection is back and more virulent than before.