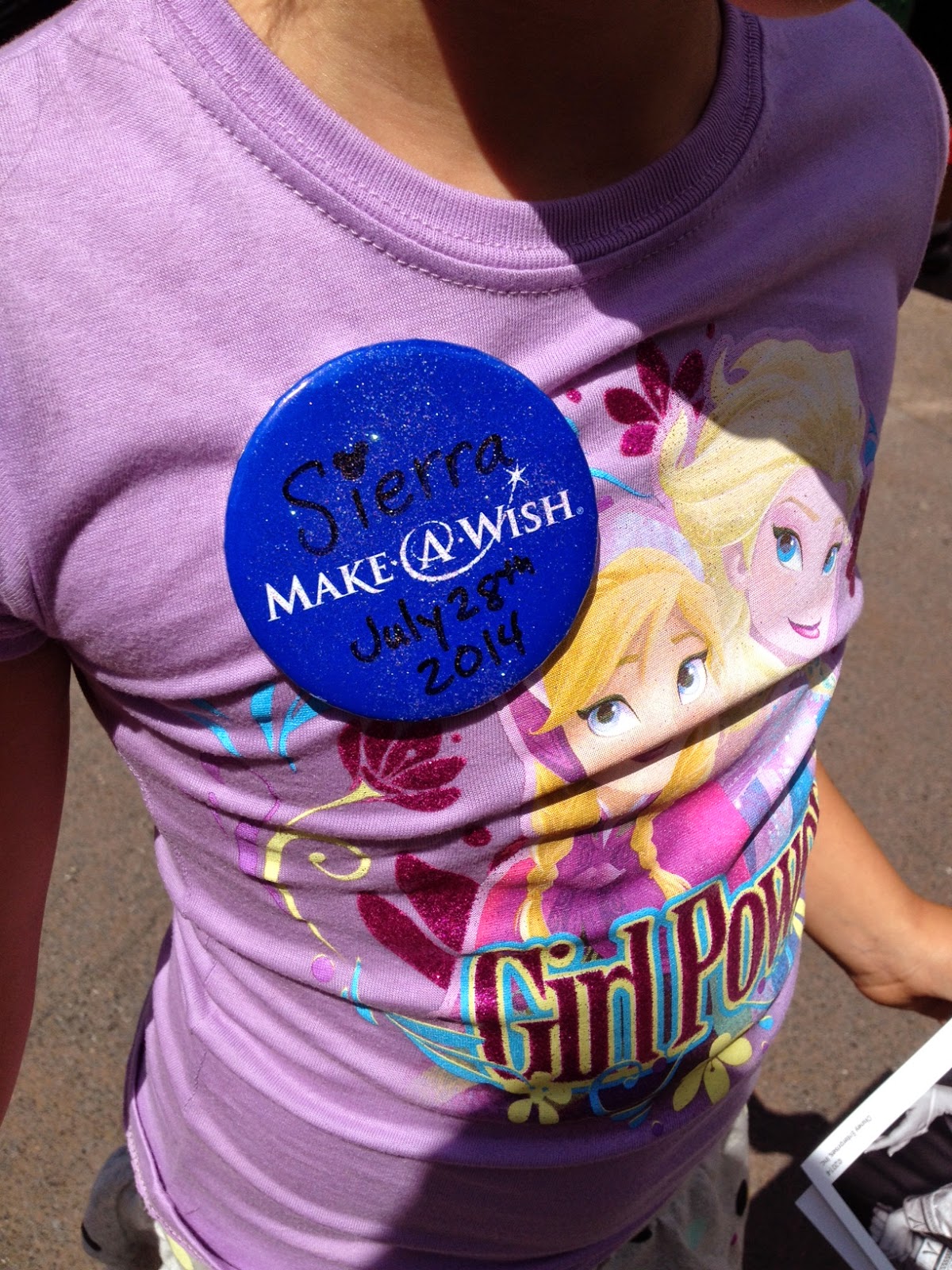 (Sierra's badge, glammed up by one of the stores)

When we realized Bodie's wish was a trip to Disneyland, less than an hour away from us and a place we had taken the kids to before, Dusk and I were a bit hesitant. We honestly wondered whether there would be something special and unique about this trip, something we couldn't provide him ourselves. To us, the whole point of the Make a Wish trip was to give a child something spectacular that the family couldn't provide, an experience the child would never forget.

An experience of a lifetime.

Make a Wish delivered that, and more.

There were a million things about this trip that made it unforgettable, that made us never want to leave.

For one thing, the special pass we got, that enabled us to go in the exits and bypass most lines. That pass alone made this trip unlike any other. When we first heard about it, I thought "I'm not sure we'll need that. I mean, Bodie can stand in line." But, honestly, I was wrong. It was hot, and a lot of the lines don't give much shade from the heat. The poor kid was already pretty done by the end of the trip; I can't imagine him standing outside in the lines all day long with his cardiac condition. He wouldn't have made it. It's that simple. To be able to flash that pass and bypass the lines was incredible; for our sweet boy, after all his struggles in life, to be able to just hop on any ride he wanted was one of the most incredible things we've ever seen.
THANK YOU, Make a Wish.

Beyond that, there were a lot of other neat touches.

For one thing, our hotel. Make a Wish put us up in a Disney resort property overlooking California Adventure. We've never stayed at a Disney resort before. I don't know if we ever will again. So, for our kids to get that opportunity, the special touches of everything being Disney themed, was so so cool.

And, I mean. This view. Bodie about peed his pants when he realized this was the view from our hotel room. 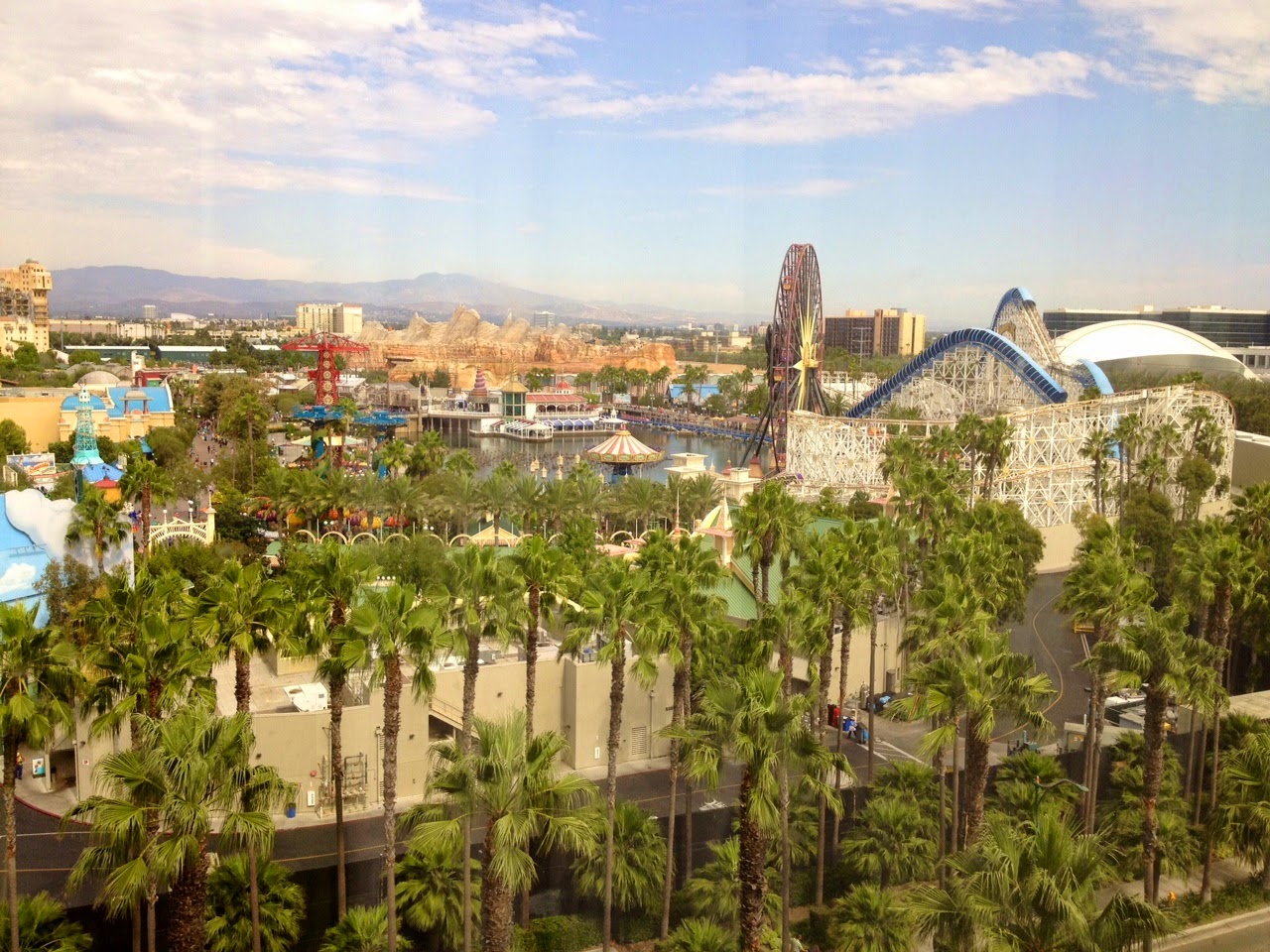 And Make a Wish arranged for a few special meals for us, including dinner the night we got there at Goofy's Kitchen, where the kids got to see some of their favorite characters. It was the PERFECT way to kick off this amazing vacation - it got the kids super excited! 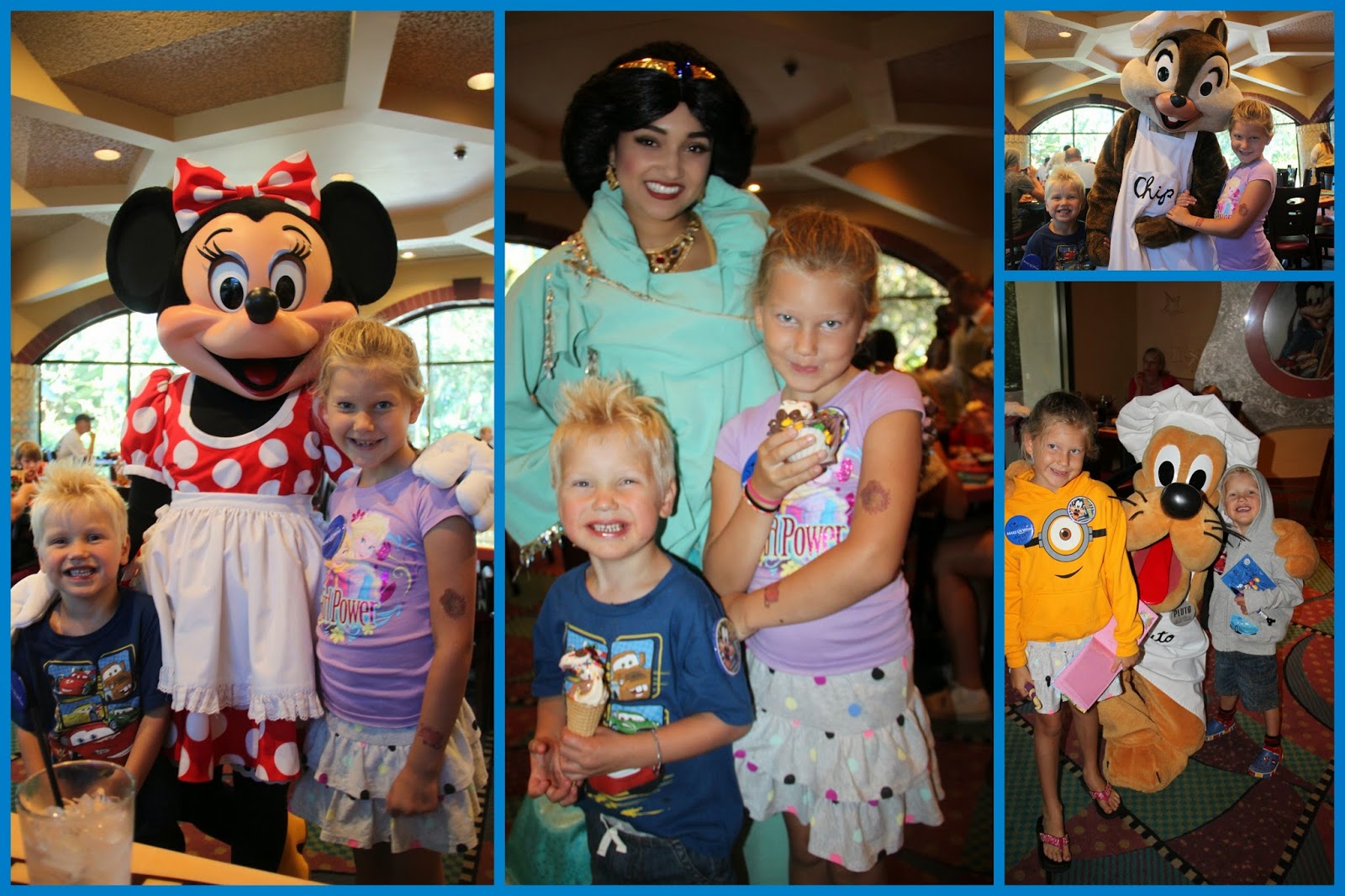 (Princess Jasmine actually escorted the kids over to the dessert table and helped them pick out their desserts - I don't know who was more excited - Bodie, Sierra - or ME!)

And breakfast one morning at Mickey's Cafe. 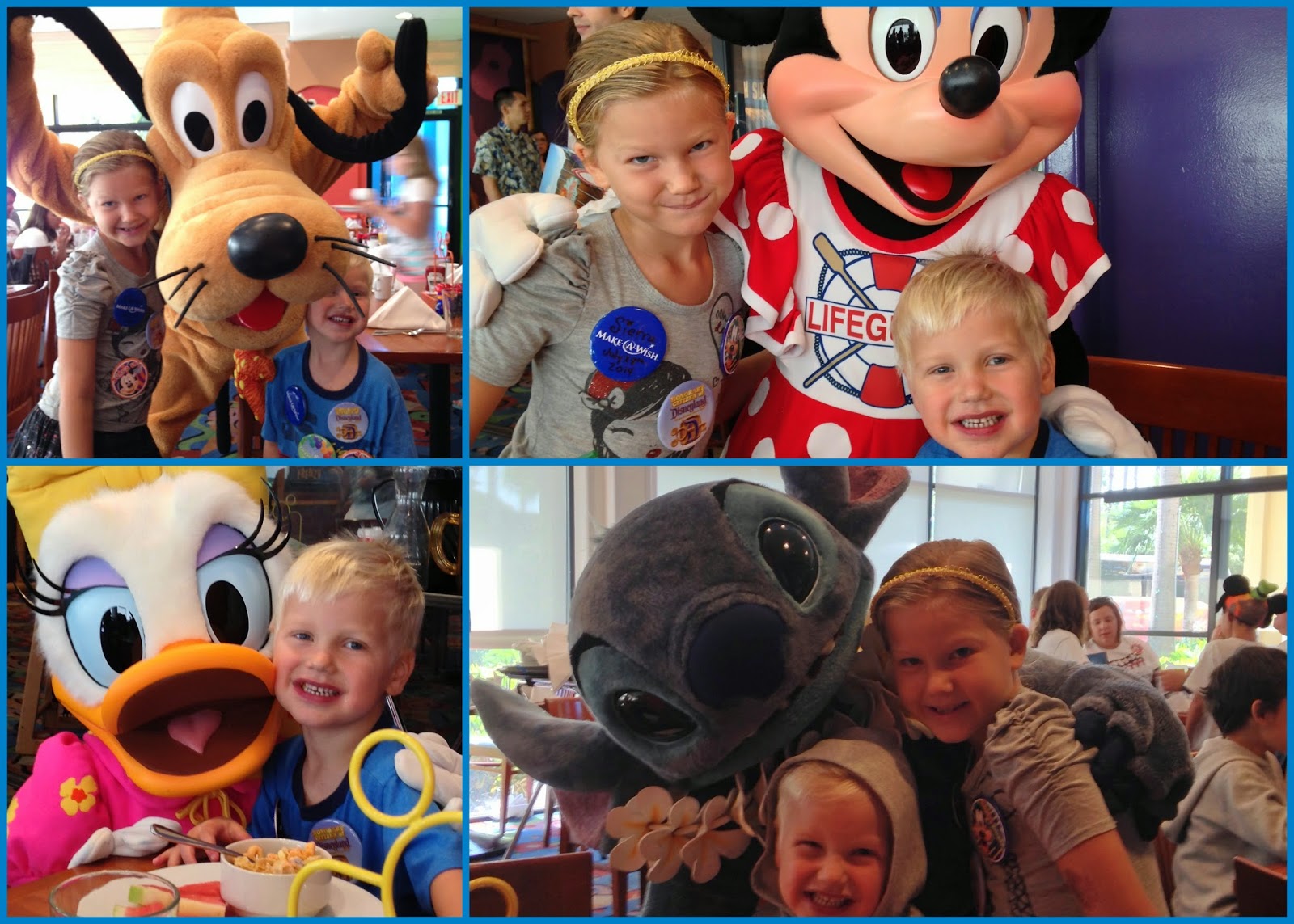 Make a Wish also gave us spending money for all of our meals…and souvenirs for the kids. This was HUGE, since we don't often buy souvenirs for our kids. I'm not sure why, except that we just don't. So, for them to have their own spending money to buy ANY souvenir they wanted, was just such a cool experience for them.

Sierra picked out an adorable tank top (with a matching one for mommy!), an Elsa shirt and an Elsa doll. 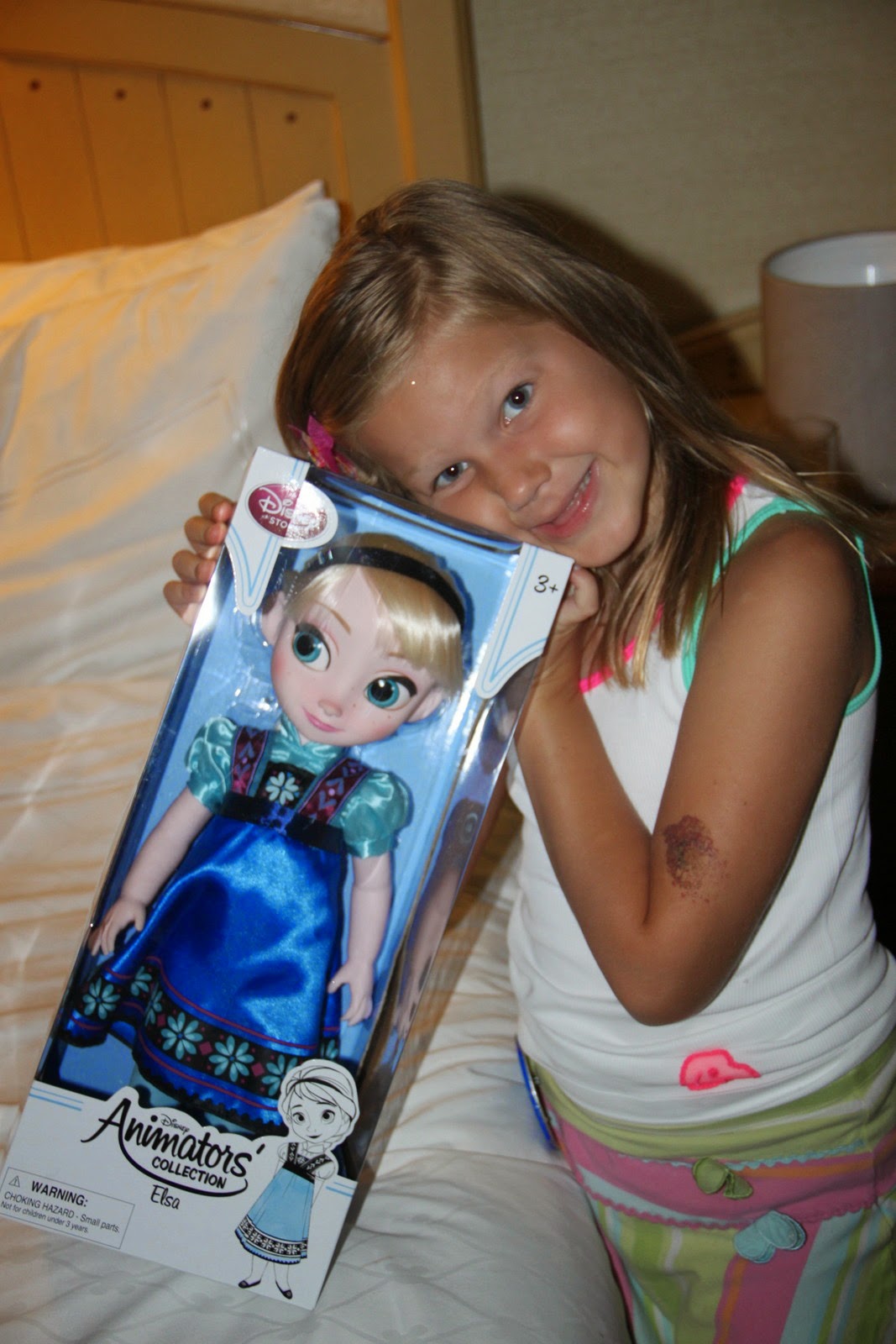 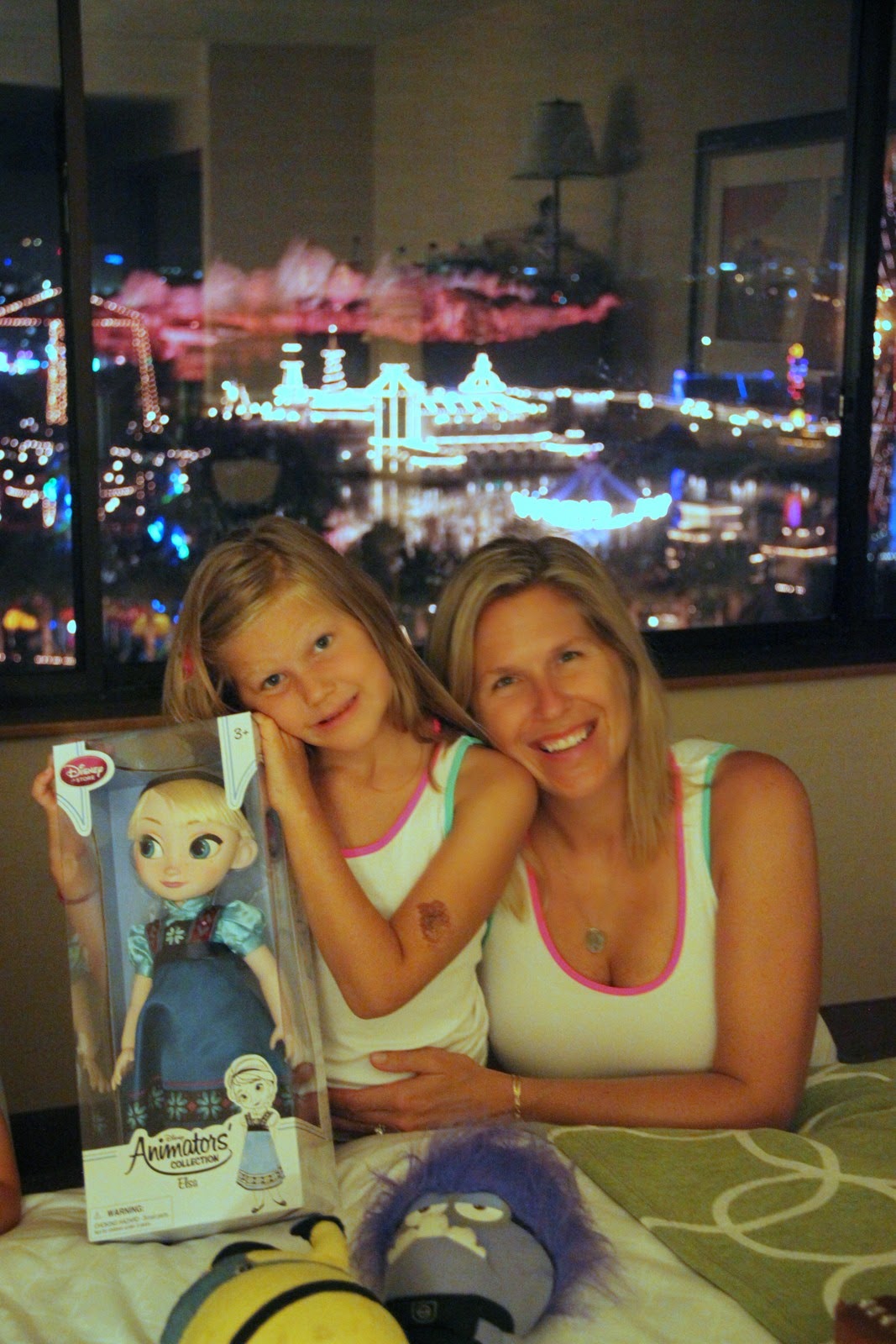 (again, that view from our hotel room?!? Perfect viewing of the color show at California Adventure!)

With his souvenir money, Bodie went to a store at Downtown Disney and created his own Mater, to match the Lightning McQueen wish grantors had brought him when they told him about his wish! 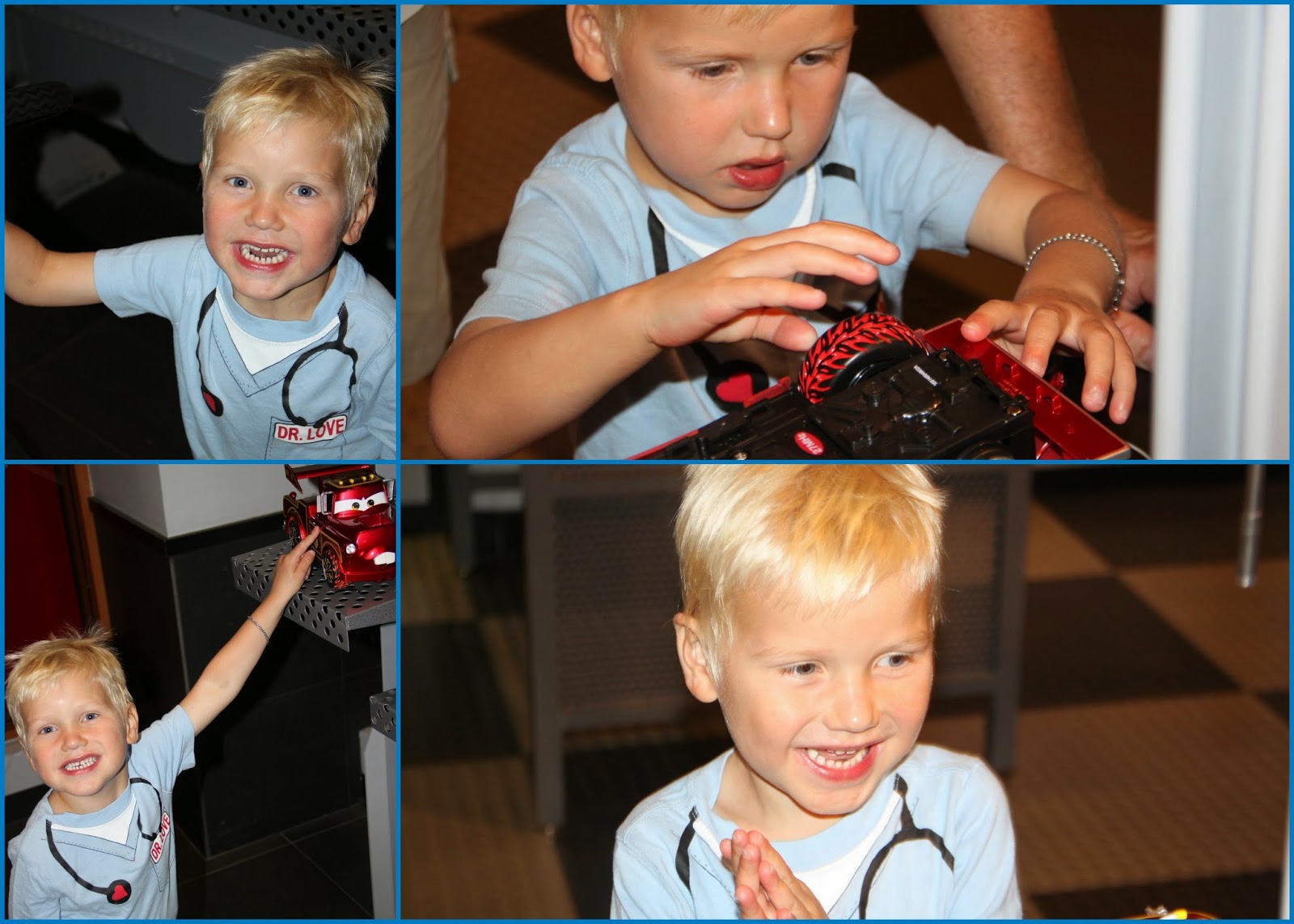 (I didn't get the whole process; something about tires and rims and a chassis and everyone clapping when he was all done - but let me tell you, this kid was IN HEAVEN). 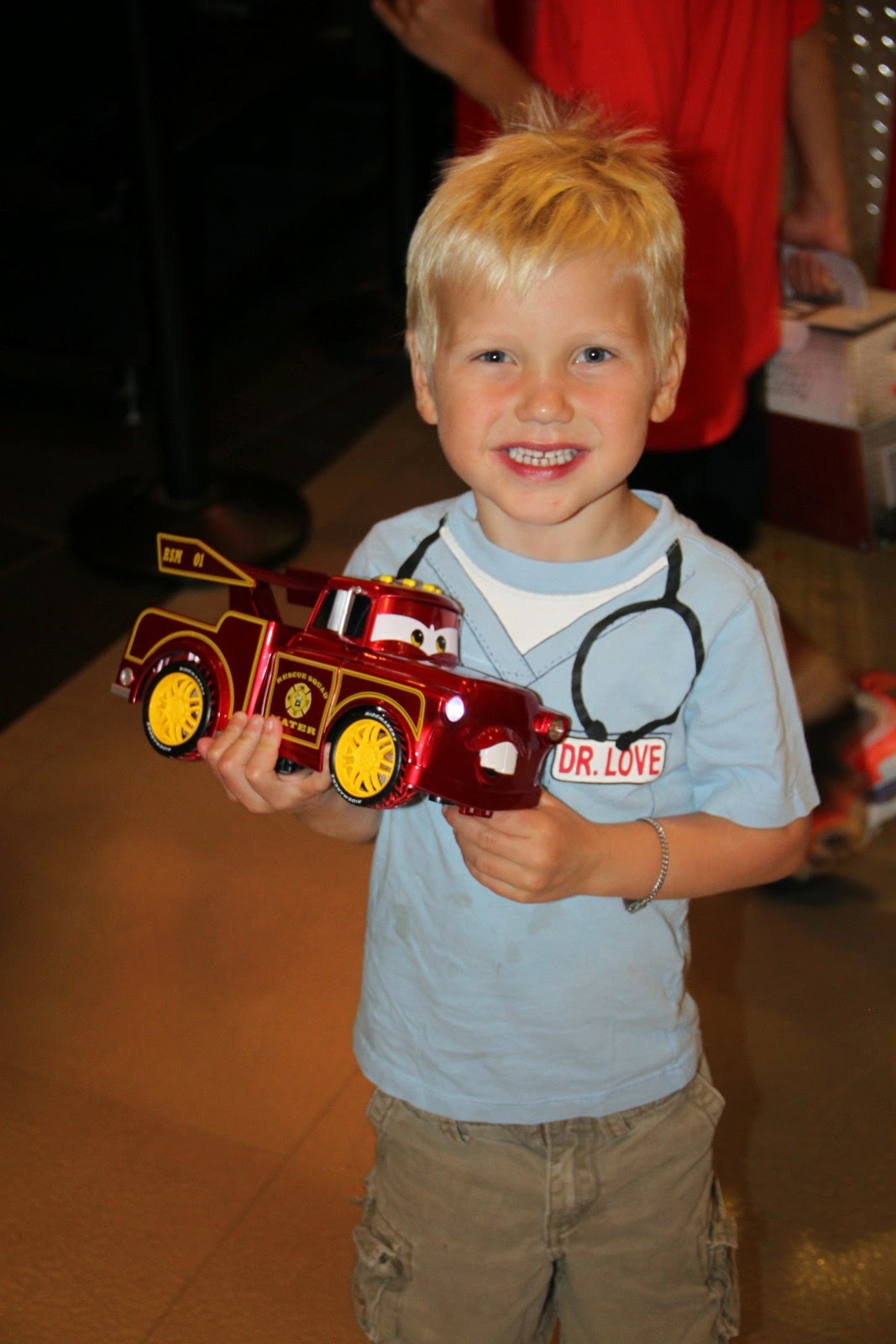 Our wish passes also allowed us to bypass the lines for character meet and greets, which was amazing in and of itself. 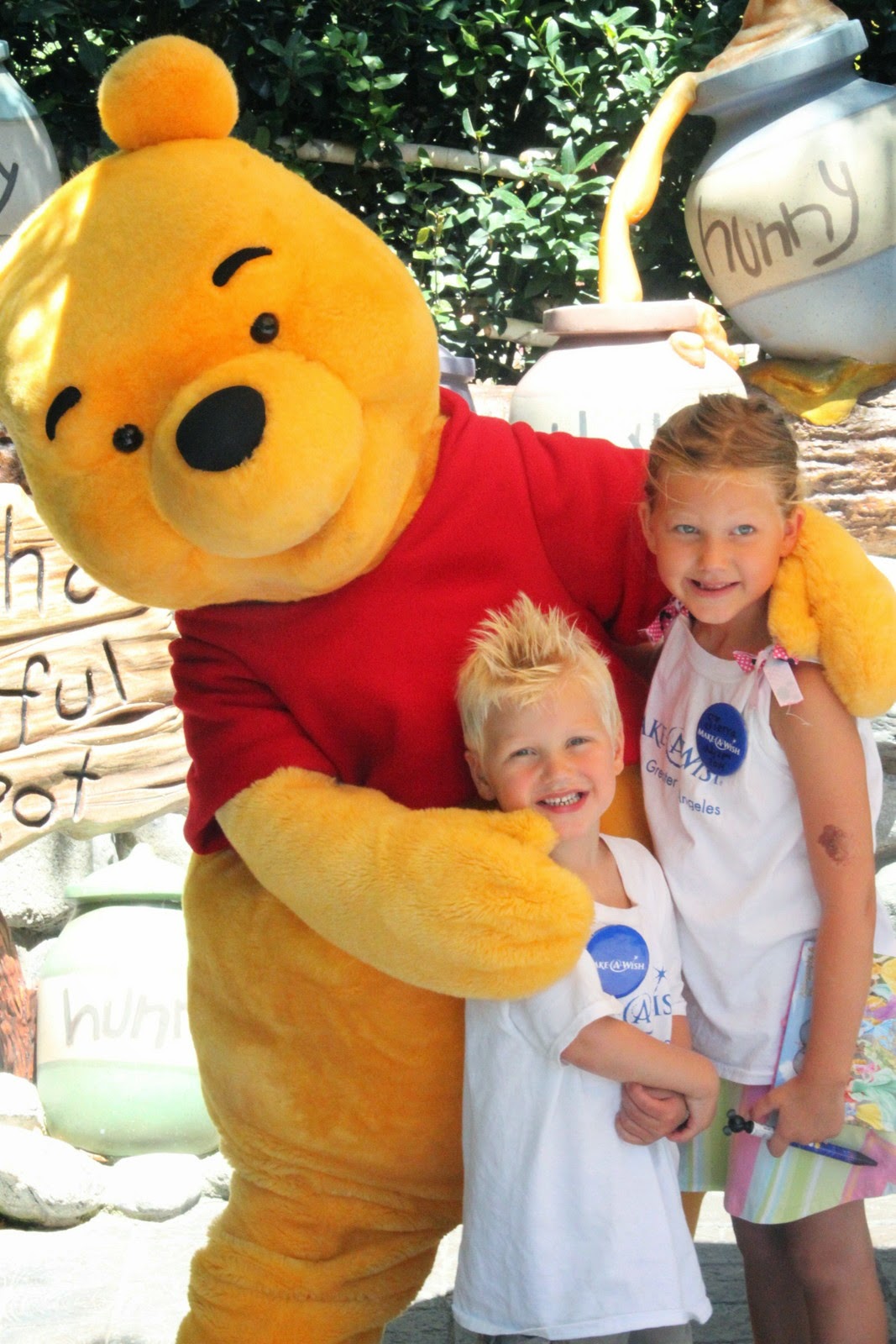 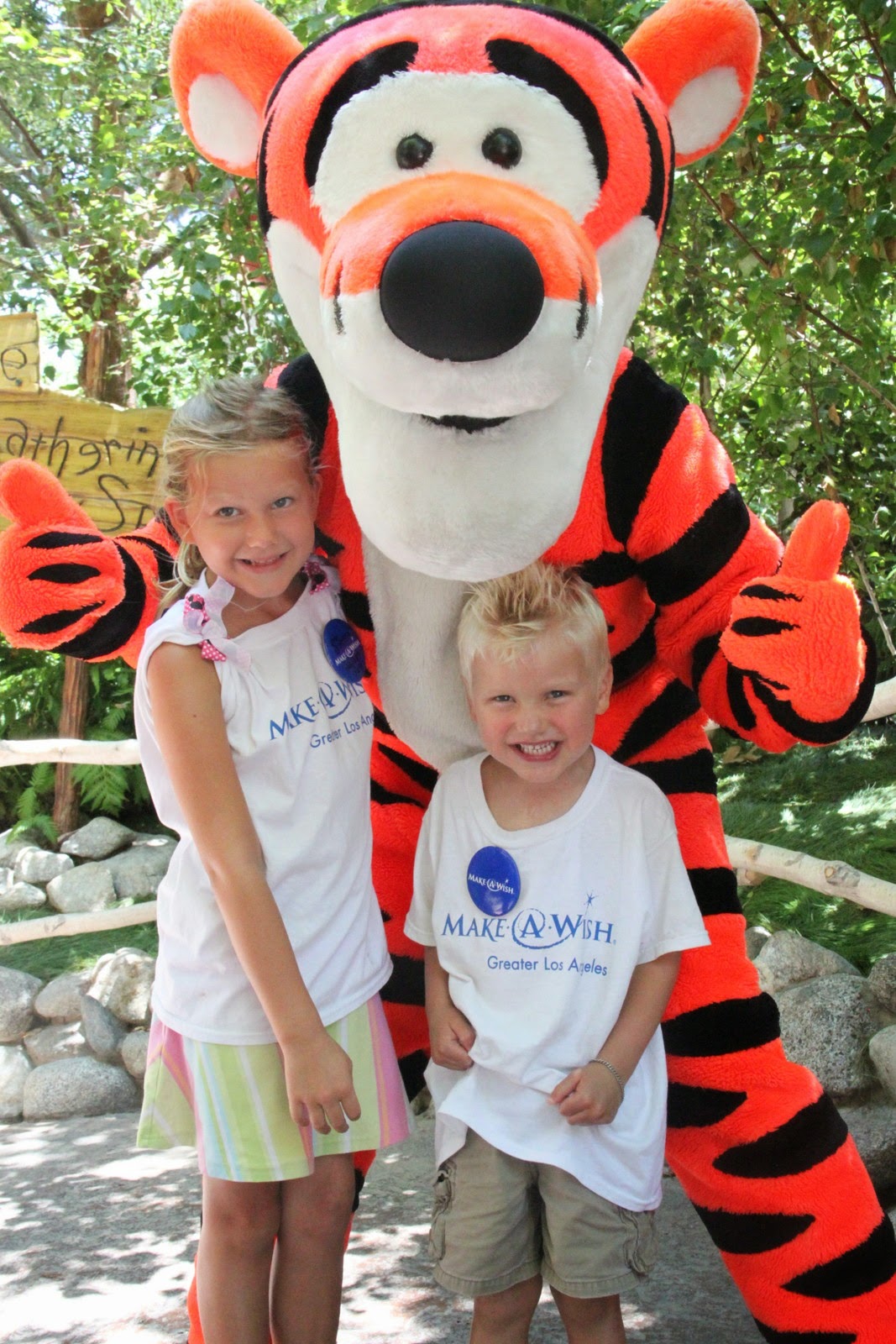 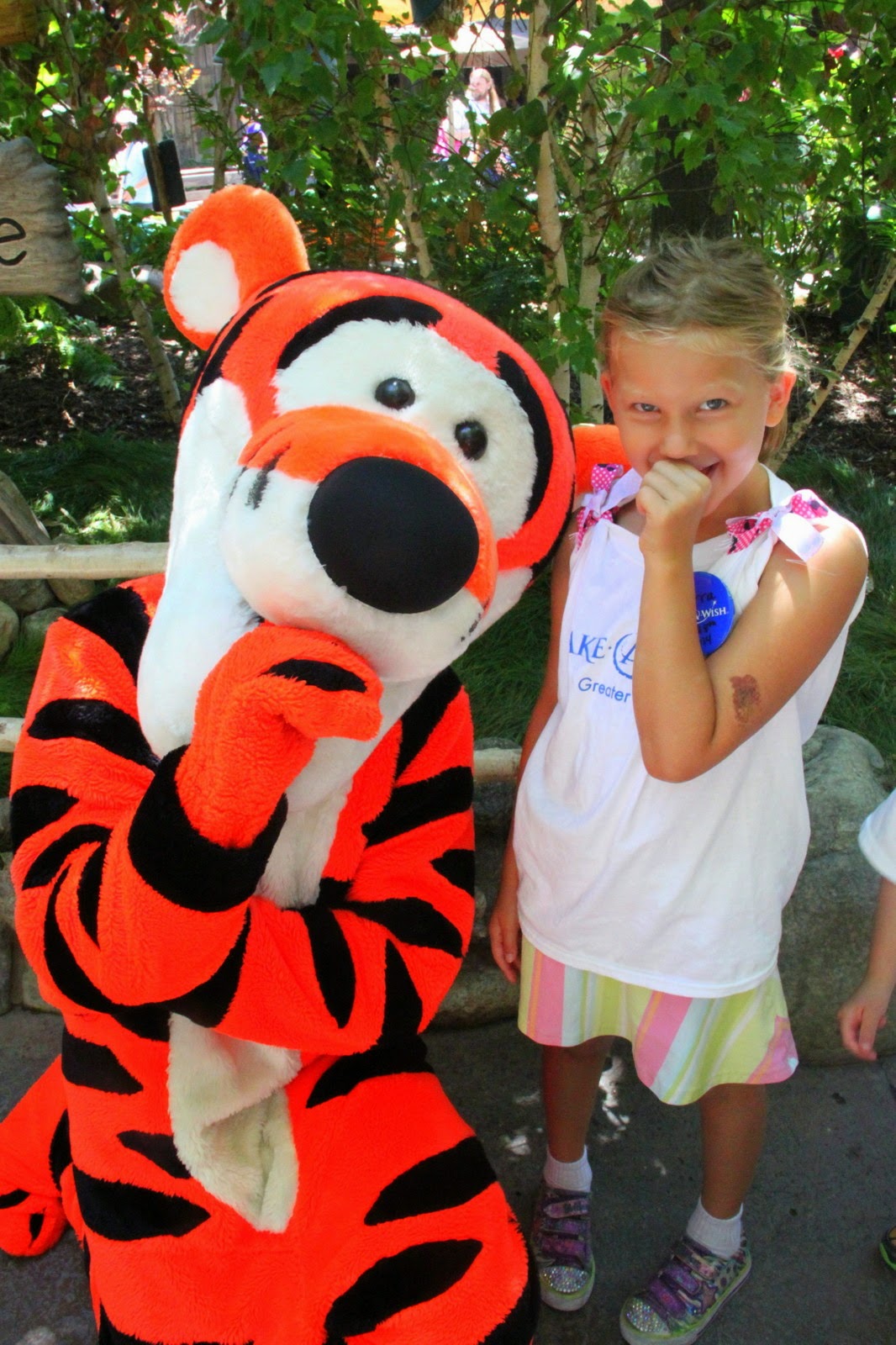 (anyone who knows Sierra well knows that Tigger has been her lovey since she was 8 months old, and her constant companion as she falls off to sleep at night, sucking her thumb; so this picture was pretty flipping awesome) 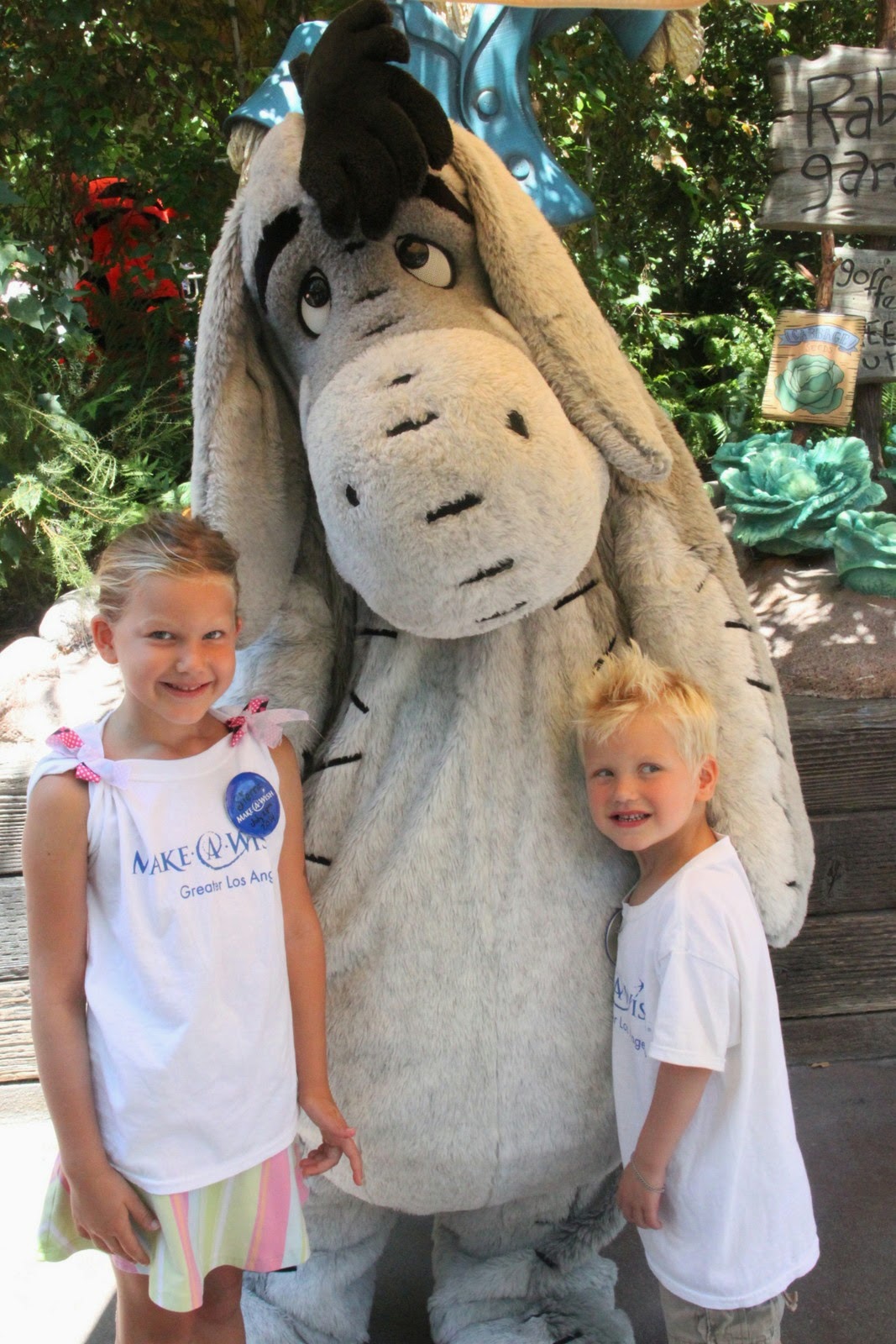 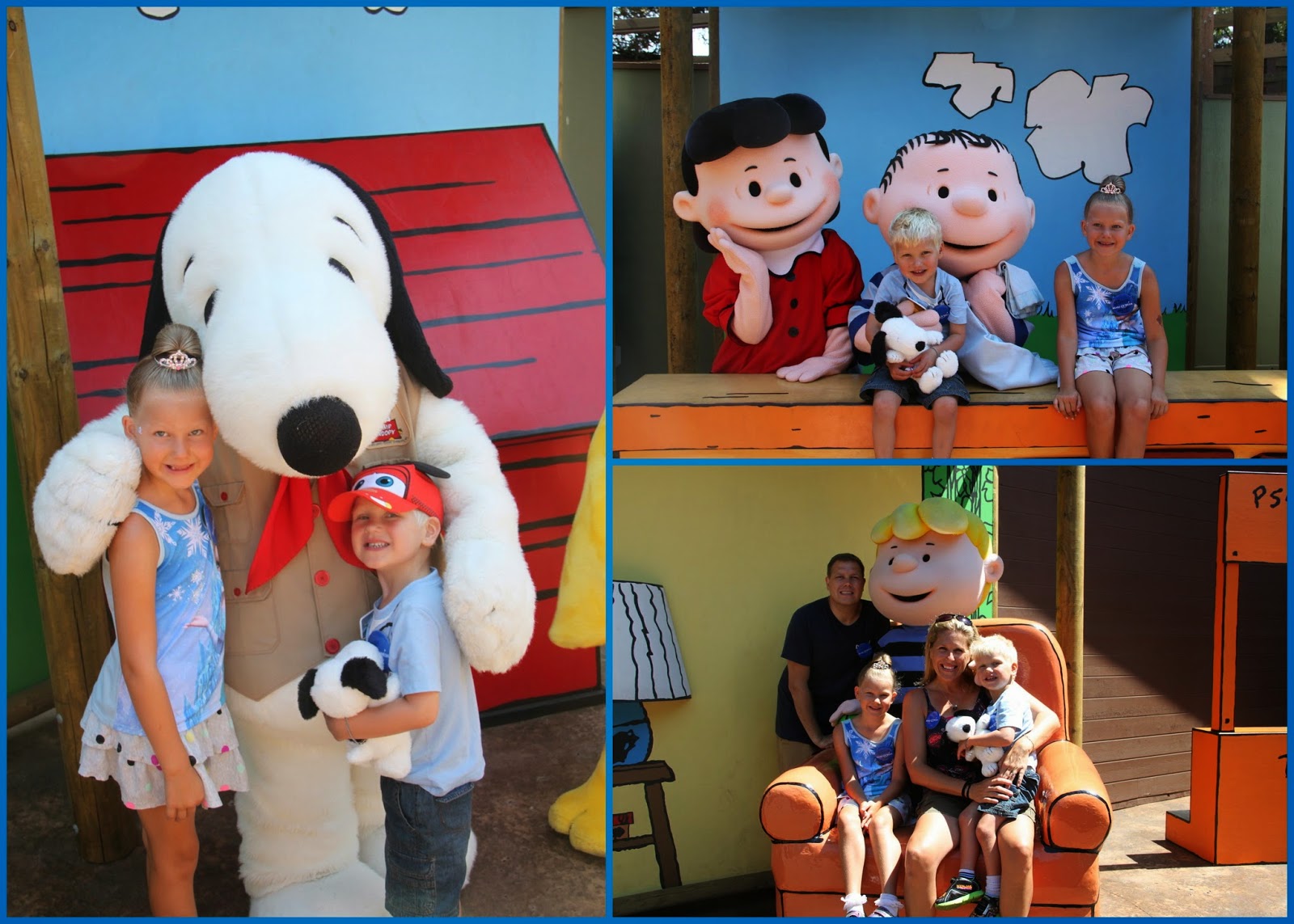 (We had a VIP pass at Knott's to allow us faster rides and Meet & Greets as well!)

And the creme de la creme of the character meet & greets?
This. 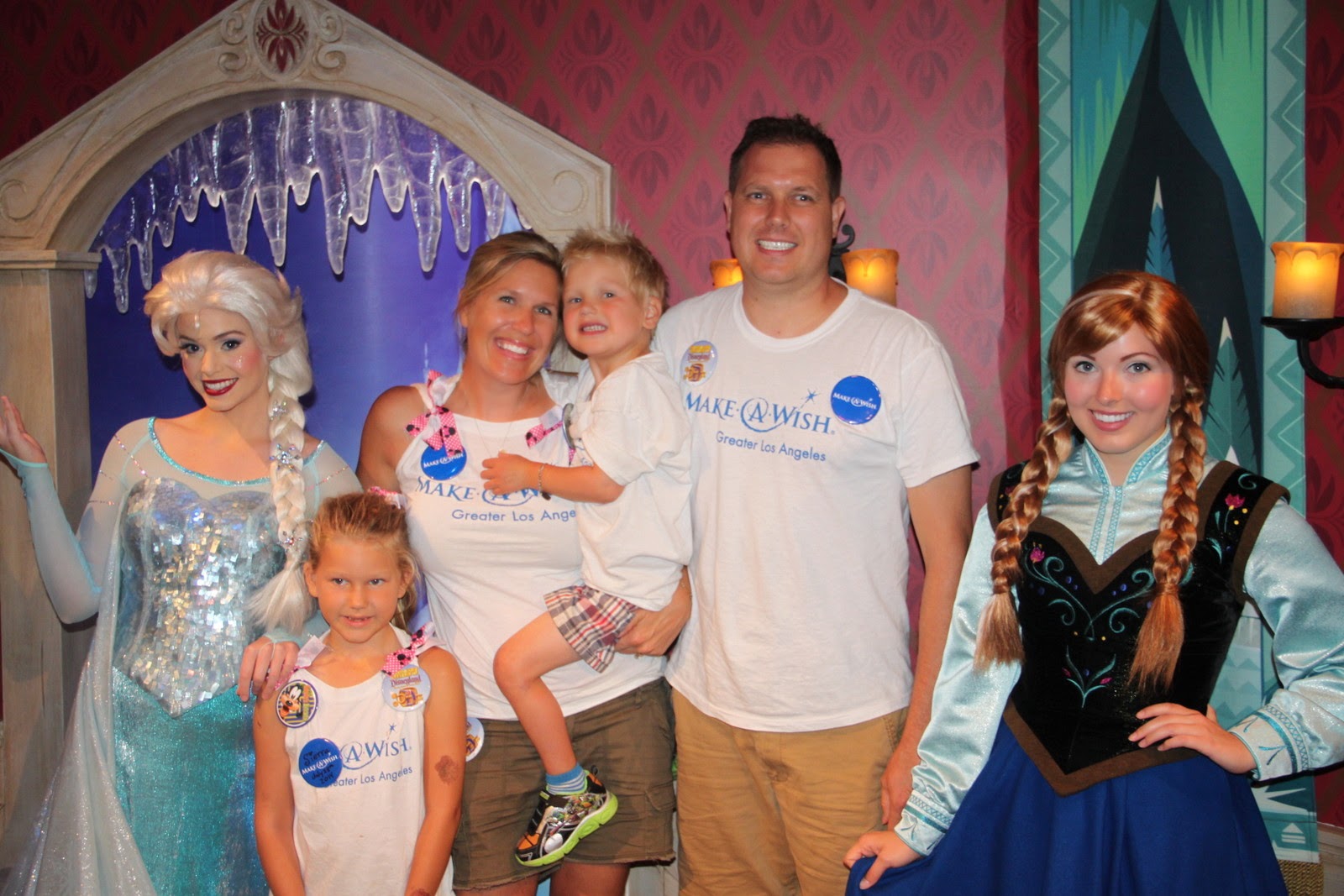 We had been warned that our wish passes wouldn't work for Anna and Elsa, and to expect a 1-3 hour wait. I had heard from others at the park that it was more like 3-4 hours. So, we had managed Sierra's expectations before the trip, letting her know we might not actually get to meet Anna and Elsa.

So, at the end of the day on Tuesday, I stopped by the Anna and Elsa Hut (the line was closed for the day, but they were finishing up the last 20 or so people in line) to find out what time it opened on Thursday so we could figure out whether we wanted to attempt it. Well, as it turned out, they had enough time left that they actually did accommodate our wish passes, and the kids were able to see them after all!!!

Bodie was BEYOND excited to see them and squealed "I GET TO MEET ELSA???" seconds before they opened the door for us; and then he promptly threw himself into my arms and refused to even look at them for the remainder of the meet & greet.
Ah, well, I guess it was just too much for him.
As Elsa kindly told him, "It's ok. Sometimes, I freeze up, too."

But Sierra was in seventh Heaven. 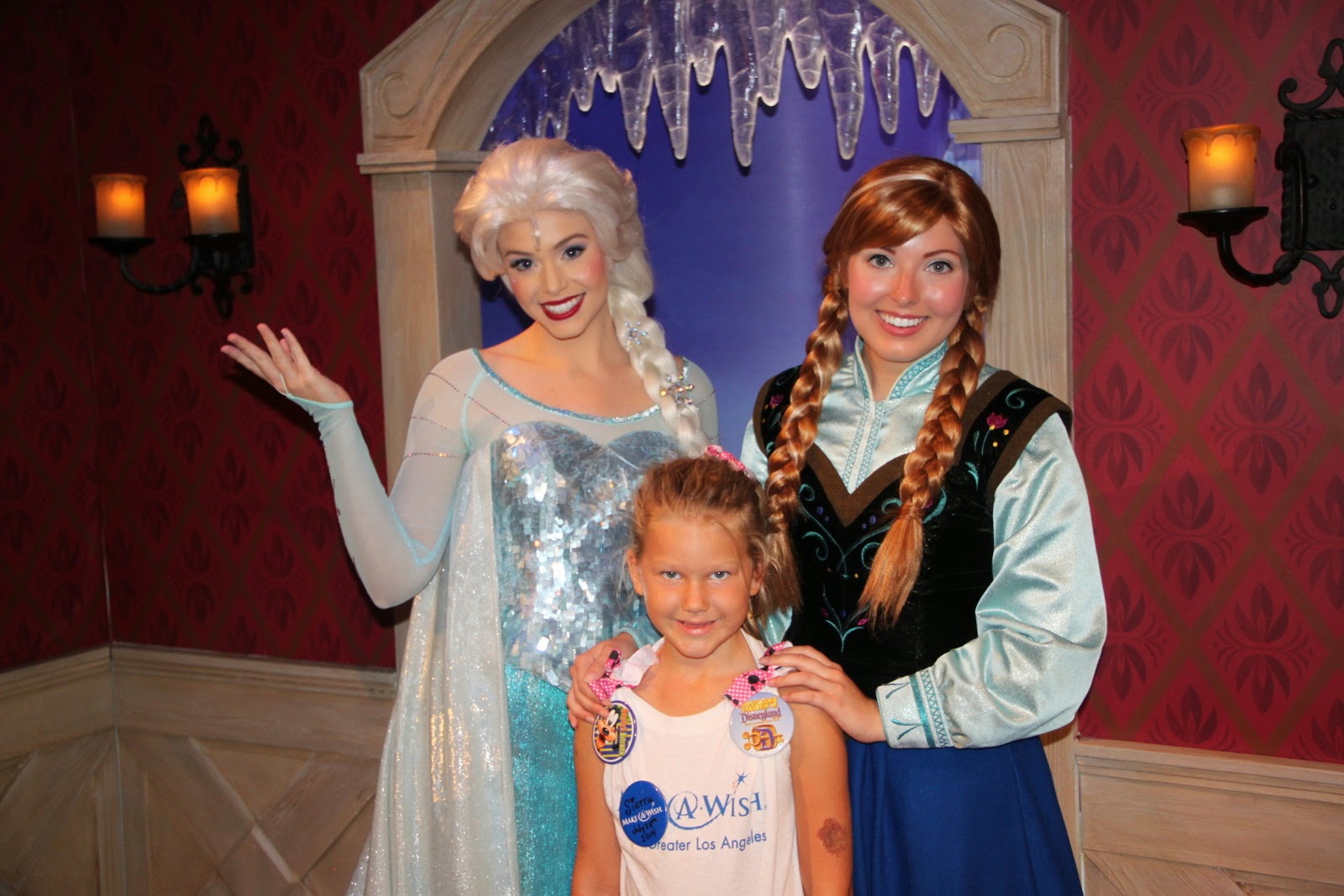 Finally, at Disneyland, Make a Wish arranged for a transformation for both kids. Bodie transformed into a Knight, and Sierra into a princess. Again, this is something we would have never done on our own, so what an amazing gift for our kids.

Bodie glimpsing himself for the first time. 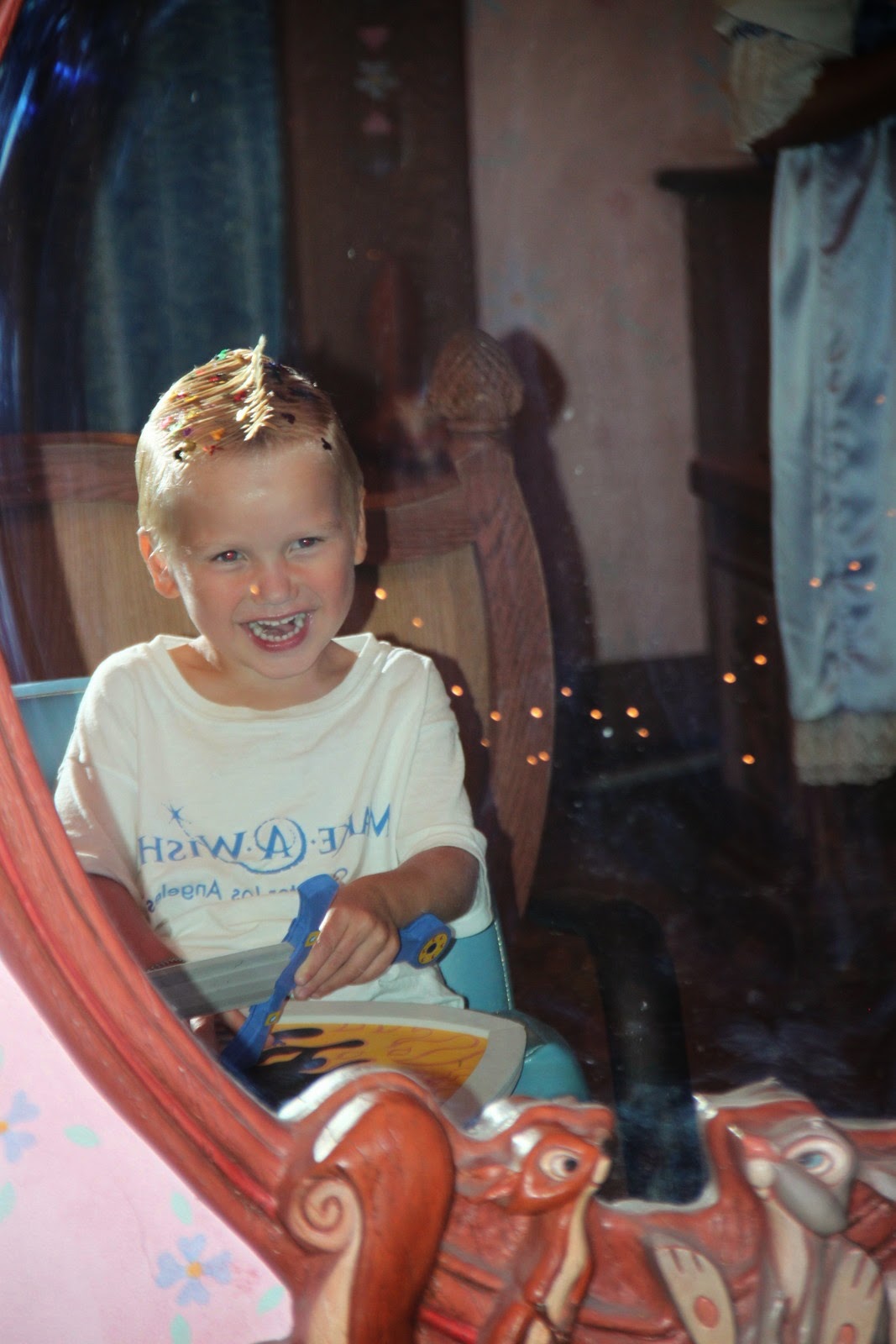 Sierra glimpsing herself for the first time (with a photo bomber in the background!). 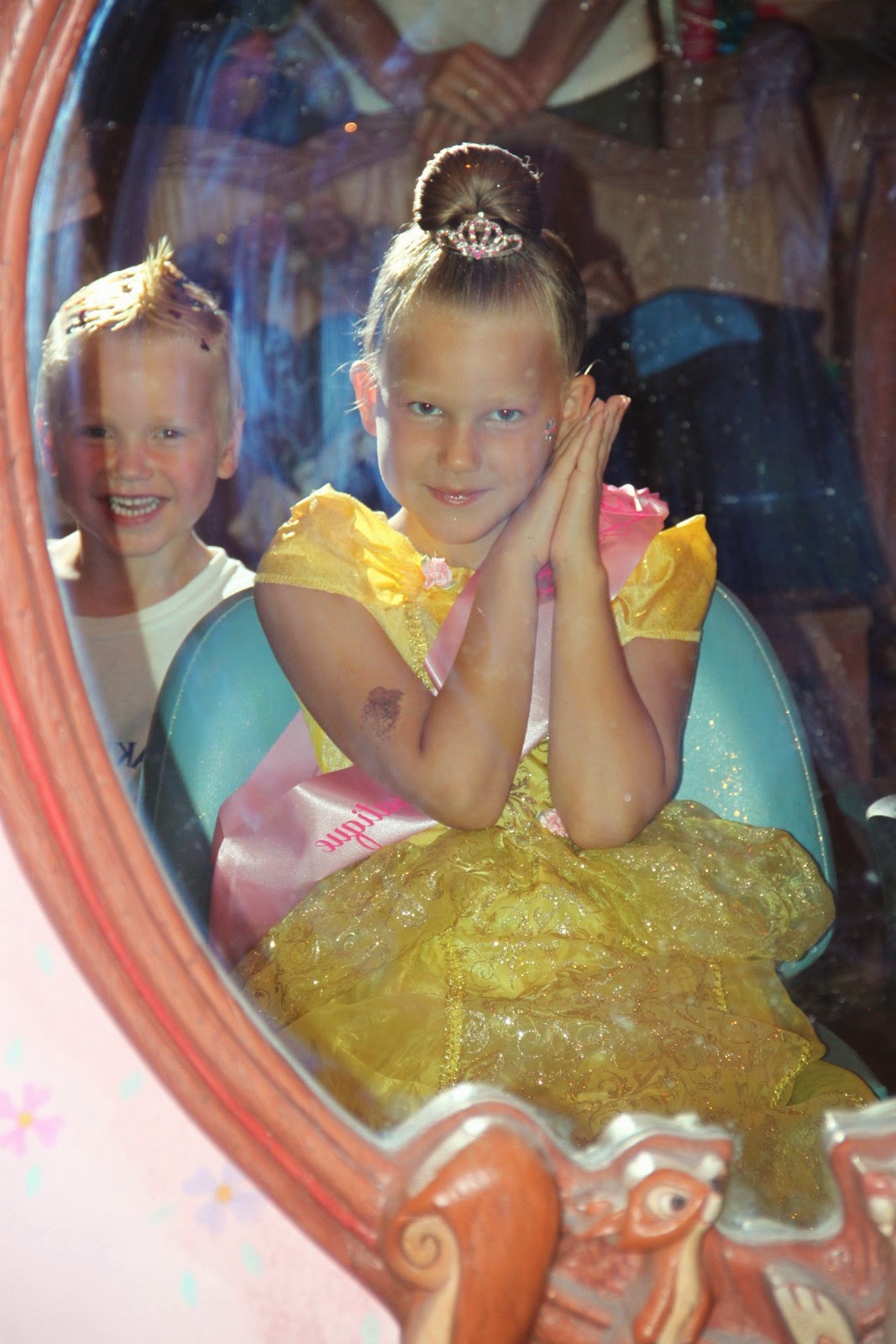 Our newly minted knight and princess. 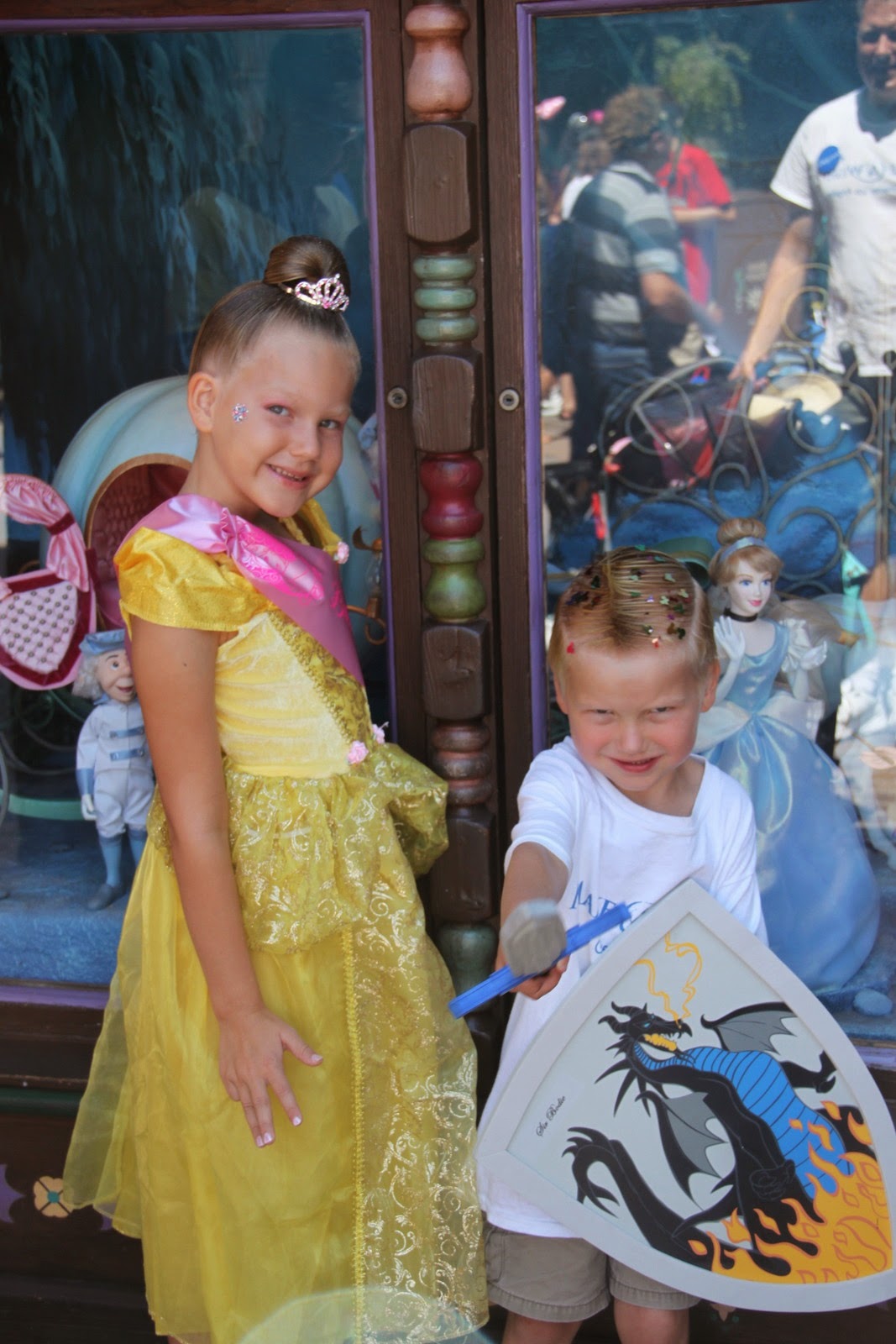 And there is so much more that MAW did for us!
Like the limo ride to Anaheim and back!
And the chocolate dipped Mickey Ears in our hotel room on the first night.
And the VIP treatment at Disneyland, California Adventure and Knott's Berry Farm just from our association with Make a Wish.
I could go on and on.
So, so many little touches that made this trip spectacular.

I wish there was a way to thank Make a Wish for the incredible trip that we had.
For all the little things they did to bring these smiles to us. 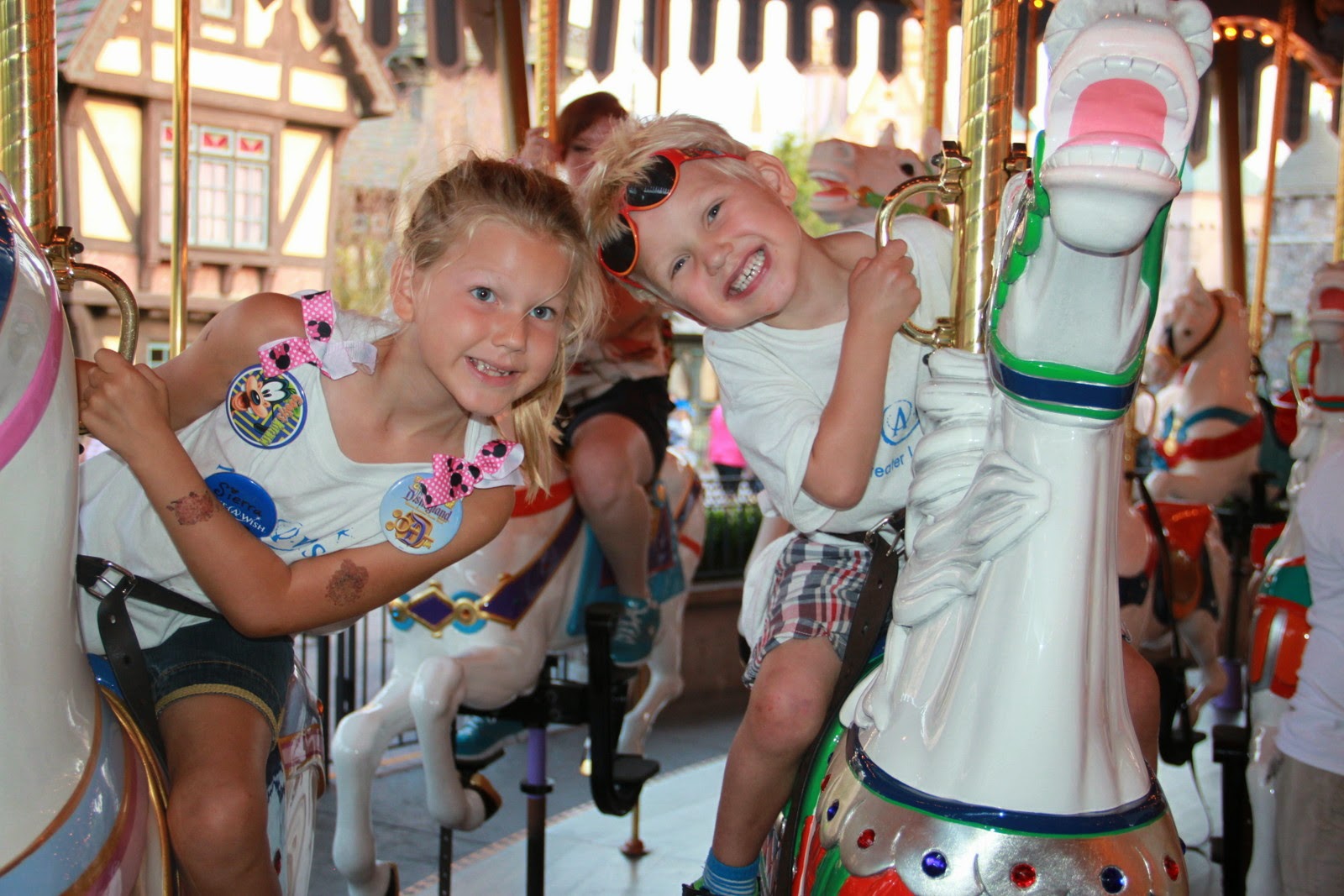 Thank you, Make a Wish.
We are eternally grateful.