You know those days, where there is no word to describe you but "DONE"? I had one of those days today.

To be truthful, I probably rolled out of bed already "done," but let's not talk about the sugar detox Dusk and I just started. But today was as if the universe conspired against me to make it a mass day of chaos.

We started with dental appointments. Both kiddos did great. The dentist did mention something about a "sliding bite" and "possible future orthodontia" for Bodie. But, as far as I'm concerned if the kiddos are brushing their own teeth 90% of the time (i.e. I don't have to manhandle the toothbrush to get them to do it) and they don't have cavities, it's a successful visit.

We then went from there to back to school haircuts and shopping. It seemed like a good idea. I swear, it really did. Maybe it was the lack of sugar that made it seem like a good idea to take both kiddos out school shopping, knowing full well I could have bought everything online - and that Bodie, just going into pre-K, wouldn't actually need any school supplies, so would be asked to come along and watch me buy tons of stuff for Sierra, and nothing for him. But, like I said, it seemed like a good idea, so we decided to try it.

So we braved Supercuts, Target, Office Depot, and Old Navy…all in the search of
- New school uniforms for Sierra (whose legs, apparently, are 2 inches longer than the average size 7 child, so she'll be starting the year already in violation of the dress code in skirts that barely pass her thigh. Awesome.).
- A new backpack. Which is fine, except that she's decided she has to have a rolling backpack. Which is fine, except that no one around here has them. Thankfully, we finally found one, but honestly, it was after going to 6 different stores in the last week. (Again, why didn't I just flipping try Amazon???)
- A laundry list of school supplies, located in the back of each store, past (of course) the HALLOWEEN costumes, forcing us to have a discussion (i.e. fight) about Halloween costumes. In August. C'mon peeps. Cut the moms a break. Can we get through the back to school chaos before we have to start thinking about Halloween costumes? Puhlease.

We eventually found everything we needed, but not without buying a few things for Bodie that he didn't need. And without me just about having a breakdown in the middle of the Old Navy dressing room, trying simultaneously to wrestle Sierra into a button down shirt and steal a Teenage Mutant Ninja Turtle ball away from Bodie, who was throwing it against the walls of the dressing room nonstop. Can I stop to ask WHY Old Navy carries random balls, or WHY they make you pass every possible toy or random junk in the store to get to the fitting room?

Wait, I know why.

Moms who are just, 100%, unequivocally, done before they ever even get to the checkout lane lined with even more crap no one on the planet actually needs, but which apparently is ABSOLUTELY NECESSARY TO THE EXISTENCE of 4-year olds and 7-year olds.

So, there I was. Sitting in the dressing room with both kids, thinking how nice it would be to be transported somewhere else, just for a second. Or, heck, at least maybe they could serve wine in the fitting rooms? Really - is that too much to ask?

And then, as if they could sense that mom was about to lose it, Sierra sat down on my lap and Bodie jumped in behind me, to give me the biggest hug ever. 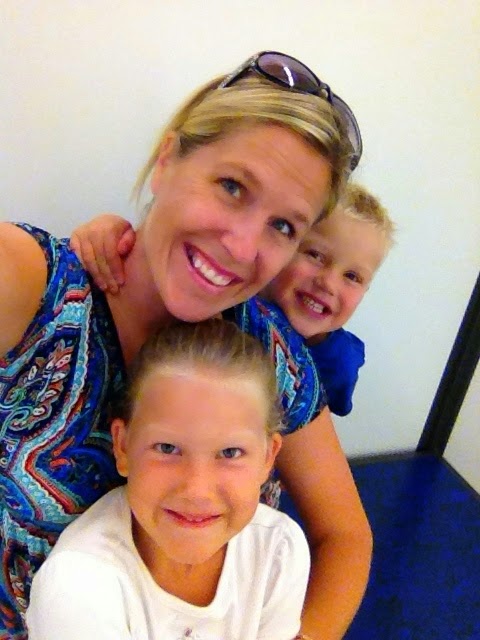 And what I love so much about pictures is that, years from now, when I look at this picture, I won't remember that Bodie was being BEYOND annoying, or that Sierra was being persnickety and not wanting to try anything on. Or that I just wanted a freaking candy bar.

I will remember how excited they were to be school shopping, Sierra all abuzz about starting 2nd grade, and Bodie obsessed with "Teenage Mutant Engine Turtles" as he calls them.

I will remember how lucky I was that my husband worked so hard that I could stay home with the kids, and not miss these moments.

I will remember how lucky I was that both of my kiddos were alive, and thriving, and happy - with enough energy to love back to school shopping.

So, as it turns out, sometimes pictures DO lie.

And that is totally OK.