The kid's got rhythm…and I've got PTSD.

Dusk and I have a ritual. There is a Wendy's across the street from CHLA. Every time Bodie has a surgery, once we have sent him off to the OR and know there will be no updates for a couple of hours, we pull ourselves together and head over to Wendy's, where we eat lunch - usually around 10am. (In our defense, Bodie is usually first case, so by the time we've gotten up at the crack of dawn, driven up to CHLA, spent a couple of hours in pre-op and been completely traumatized by handing our son over, it feels like lunchtime. Actually it mostly feels like vodka and a meltdown time, but that's a whole 'nother Oprah. So we settle on Wendy's.)
Anyway, Wendy's.

Bodie had an appointment at CHLA today with his electrophysiologist and as we drove by Wendy's, I had this rush of emotion and blurted out "I HATE THAT WENDY'S!!! I mean I really HATE that place!" For real. Can you say ptsd much? I mean, really, what is there not to love about Wendy's? Amazing chicken sandwiches, great salads, and don't get me started on the Frosty's. But, yeah, that one apparently has waaaaay too much anxiety associated with it to be on my favorite list.

The thing is, I've driven by that Wendy's 100 times, and never had any sort of reaction. I think that's because we've always been so connected to CHLA, with regular doctor's visits and Family Advisory Council meetings. But we haven't been there much lately. For a variety of reasons, I've backed off from my Family Advisory Council role for some time now. And Bodie is in a good place. A really good place. We're only up at CHLA for bi-annual electrophysiology and pulmonology appointments right now. Not bad for a kid who spent his first 5 months inpatient and was in and out of the hospital after his last surgery. I think now, being in a good spot physically, we're just not there as much and my mind is having time to actually have PTSD (as opposed to what I lovingly refer to as "DTSD" or DURING Traumatic Stress Syndrome). This might be the first time someone is excited to have PTSD.

So, there you go.
Apparently I have PTSD, hate Wendy's and like Vodka.
Little known facts about me.

As for this little dude's appointment, it went fantastic. 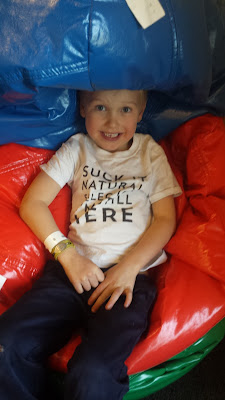 His heart rhythm looked great, he's pacing most of the time (91%, which means he's tachycardic less than 9% of the time). As recently as a year or two ago, he was tachycardic for 25-50% of the day, so this is HUGE. His med cocktail is working, he's growing, and his rhythms are good. We know surgery WILL be happening sometime in the future (not open-heart, but heart surgery nonetheless to disconnect the nerve that runs adrenaline to his heart, to reduce the risk of serious adrenaline induced tachycardia), but for right now, it's still on the back burner. When it moves to the forefront and with how much urgency will really depend on Bodie's heart and when we start to see indicators of increased unwanted ventricular activity. And we're ok with that.

And then we all just stood around in awkward silence, trying to figure out what to do when we didn't have crazy rhythm issues to discuss for an hour.

So, pretty much the best end to an appointment ever.
We seriously love Bodie's team so much.
We're super blessed to have such smarty pants minds managing Bodie's rhythm issues.
And the fact that they all loved his shirt just makes us love them even more. 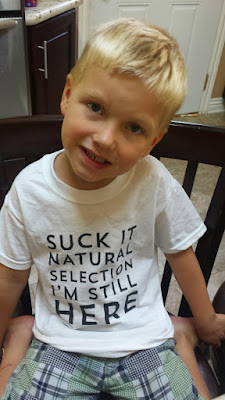 (for the record, it reads
"Suck it, natural selection
I'm still here."
I'd say that about covers it.)