Working on my average 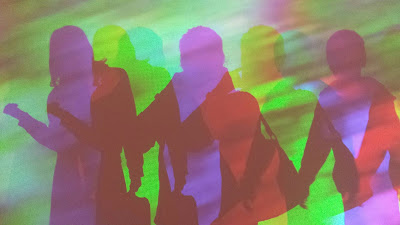 About a year and a half ago, I wrote a post about being an average mom. Still one of my favorite posts to date. If you want to make yourself feel like a stellar parent (trust me, it'll be like a late Christmas gift to yourself), you can check out the blogpost here. I'd love to say I've moved into the B (or heck, I'd take a B-) category, but I don't think I have. But it's not for a lack of an effort!

For instance, this is my "light reading" stack on my bedside table. 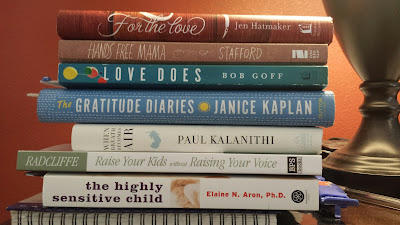 (To be fair, I've actually finished the top 4. I can wholeheartedly recommend all 4- really great books. Oh, and I also read "Where'd you Go Bernadette," but can't find it at the moment. Also, a fantastic read.

But I digress. I have found a reoccurring thing in two of the books so far (in For the Love and Love Does). While they equally inspire me and make me feel like the most lackadaisical parent on the planet because I'm not trekking my kids to London on their 10th birthdays, one inspiring thought keeps hitting me.

What inspires my children? Not "what do I think inspires them, but what truly sets their hearts on fire?"

Because the latter is a different kind of question than the former. The former we dream of from the moment we find out we're pregnant, going to be bringing another soul into the world. We imagine they'll be like us, and that what inspires us will inspire them. Because after all, I am a perfectly reasonable and cool human being, so why wouldn't my children be exactly like me?

But then, somewhere in the child rearing experience - somewhere between birth and 5 or 6, you start to see a new person emerging, someone who has their own likes and dislikes (ok, that starts approximately 5 seconds after they've exited the womb), but also someone who in inspired by things maybe you are not inspired by. And that lesson comes later.

So I've been really trying hard to listen to my kids, to do that whole intentional parenting thing everyone is raving about (which is apparently a thing and super important, but also kind of stinking hard to actually do it). I've been listening to the things my kids are saying about what they're interested in and inspire them.

I'll be honest - for a 5 year old boy, that list is pretty short. Star Wars and Legos. I'm serious. That's it.

But as I've been digging deeper, I'm seeing a real interest in the fine arts, by both of my kids. Nice that they inherited it from Daddy, since they certainly weren't getting that from me! But Bodie loves art and really spends a LOT of time on it. I can remember his preschool teacher telling me she would always have to make sure Bodie started his art with the earlier group of kids, because he would always be so meticulous and make sure his was exactly the way he wanted that he would take the most time.

And this week, his teacher showed me this. 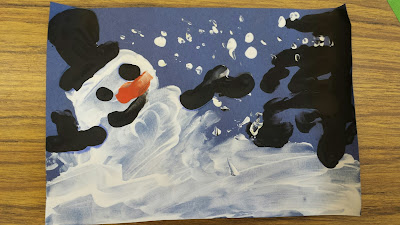 Pretty cool, huh? Not sure whether the heart on the chest was intentional was not, but I'm pretty much digging that.

And Sierra LOVES art, and ballet, and is becoming quite the clarinet player. We're having so much fun watching that part of her blossom.

So this week, when the kids had the day off school, I decided to take them to the Art Museum. And let me tell you, the kids were in utter bliss. 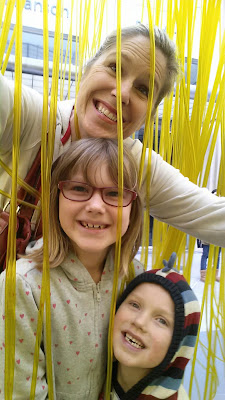 I was worried Bodie wouldn't do so well, since he doesn't quite get the whole "look with your eyes, not with your hands" concept. But, I tell ya, he so did. Didn't touch a thing he wasn't supposed to, and kept running from exhibit to exhibit, loving them all. And Sierra wanted to stay in every room a bit longer, talking about the artists she is learning about in school. 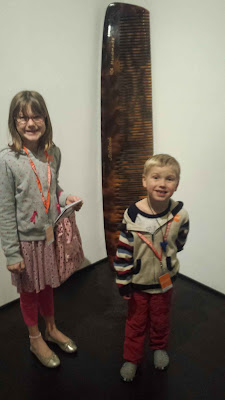 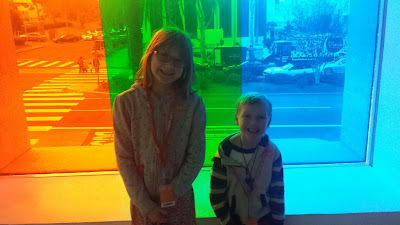 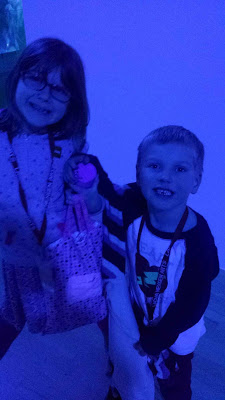 (for the record, this is the only place Bodie is allowed to be this blue.)

and the children's art center, where they got to paint something themselves. 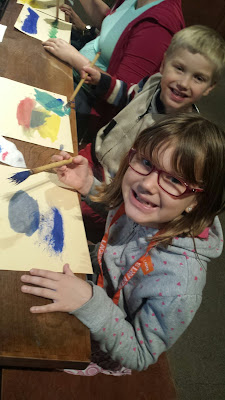 The kids were brimming over with excitement and cannot wait to go back. I was sort of blown away - I'm not sure what I was expecting, but it wasn't that. I guess it just goes to say - a little bit of intentional parenting goes a long way. Because these kids walked away inspired and moved. And I walked away with a little better appreciation of what inspires and moves them.

If you have kids, take some time to look inside them and find out what inspires THEM. Not just what you think inspires them, or what they're good at. Sometimes what they're good at IS what inspires them. But sometimes it's NOT. And part of our job as parents is to help them discern between the two. Except it's hard to remember in-between getting homework and extracurriculars managed, getting kids fed, vitamins in and teeth brushed, and kids to bed at a decent hour. Sometimes, we get so boggled down by the day to day mundane that we forget that we are actually raising people, who yes, need to be able to prioritize schedules and get along with others and wipe their own butts after going to the bathroom for Pete's sake. But, somewhere along the way, we need to also teach them how to figure out what inspires them, shapes them and will ultimately guide their lives.

Kind of a tough job for us average parents, but I think we can do it. I hope.

I'll leave you with this quote from Love Does, which spoke right to my heart and inspired me. I hope it does for you as well.

"I think that's because, He (God) has the same kind of relationship in mind for us that I had in mind for my kids. I think a father's job, when it's done best, is to get down on both knees, lean over his children's lives, and whisper, 'Where do you want to go?'"
- Bob Goff, Love Does