Bodie vs. The Altitude: Round 1. 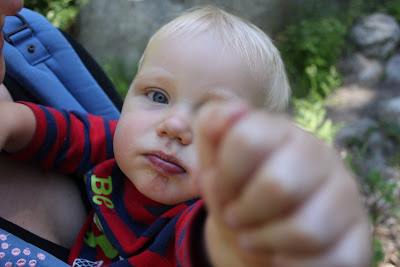 Well, we did it! We tried Bodie out at elevation this last weekend and he did ok!!! The short story is that he tolerated it ok, his sats dropped, but he otherwise seemed fine. The not-so-short story is that we realized on the way up that he was already heading into a pulmonary hypertension episode (that was even before we had any elevation change), he didn't sleep well (ok, that's an understatement - he was pretty much moaning and tossing/turning all night long), the next morning, he had a runny nose (caught daddy's cold) and spent the entire weekend grabbing his gums and screaming in pain (yup, more teeth - the good news is that once these last 2 are in, we are done other than the last 2 sets of molars, which shouldn't be for a while...we hope).

His sats did drop (to the high 60's and low 70's from his usual low 80's), but honestly, his sats can drop that low from a pulmonary hypertension episode alone - or from an episode triggered by a cold or teething...so, it's hard for us to know whether he was truly responding to the altitude or the cold...or the pulmonary hypertension attack...or the teething. But in any case, other than the night of restless sleep (probably due to a sore throat from the cold, we're guessing - either that, or the fact that mommy forgot the sheets for the pack 'n' play so the poor kid was sleeping on a rubber mattress basically - oops), he was acting fine. I would never have known we were at a higher elevation than home, let alone 5,000ft! He was his usual crazy adventurous self - climbing on everything, crawling and cruising like a madman. His color was great and he was happy, well, except when he wasn't grabbing his gums in pain. So, our big takeaway from all of this is that if, even with a PH episode, and teething, and a cold, he tolerated altitude ok, he's probably ok for us to try a bigger trip. So (drumroll please), his cardiologist has given us the go-ahead to try for a Tahoe trip this summer!!! (yes, of course, subject to the fine print that always comes with planning anything with this kid - things could change at any moment, but based on what we know at this exact moment in time, it looks like we can plan our trip!)

We ended up spending one night in Idyllwild and then headed down to Palm Springs for the rest of the weekend. We took a short detour through the living desert, a little zoo in the desert that Sierra always loves. It was a great weekend, as you can see:

The cabin we stayed in had a little playground onsite and the kids loved it. I couldn't believe they didn't advertise it on their website - it was the biggest selling point for the kids! 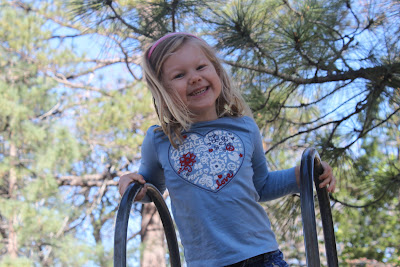 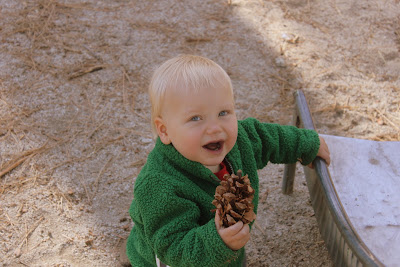 The cabins right next to us had a beautiful coy pond and a path down to the creek. Sierra had so much fun feeding the coy! Can you believe how many fish there are (and how fat they are? Clearly my kids aren't the only ones into feeding them!) 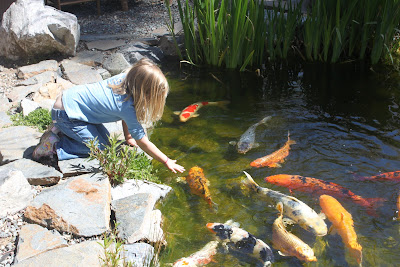 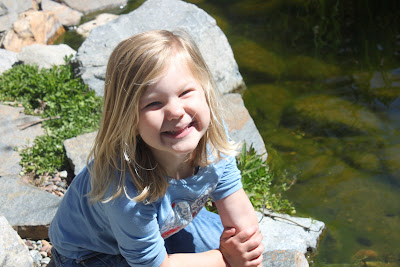 Dusk went in the creek with the kids. Sierra loved it. Wish I had a pic of Bodie smiling with his feet in as well...but sadly, every pic we have of Bodie in the water is of him crying. He was NOT a fan. 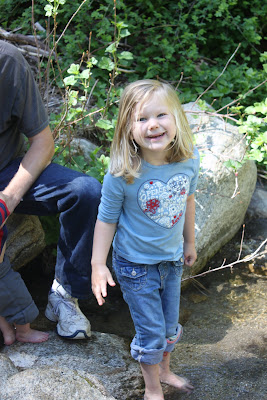 The Desert of the Zoo has a really cool petting zoo. Sierra always loves it. Bodie had a lot of fun this year. He was really into petting the animals. But they weren't quite so into him. One of the little goats got tired of his not-so-gentle petting and got up and walked away. Bodie's response? To look up at me, stick out his lower lip and start crying. It was so stinking cute. 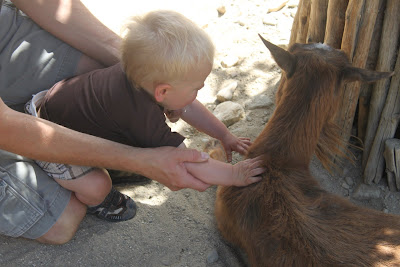 Both of the kids were pretty enthralled with the leopards. Absolutely beautiful. 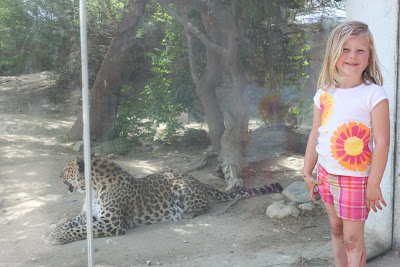 The kids were totally into the rocks at my parents' place, just digging through them and holding them up proudly. Amazing what excites kids. 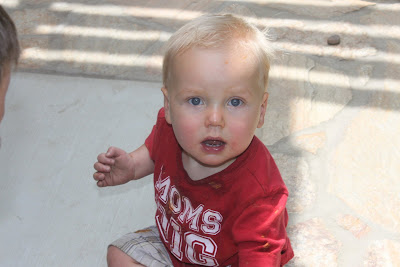 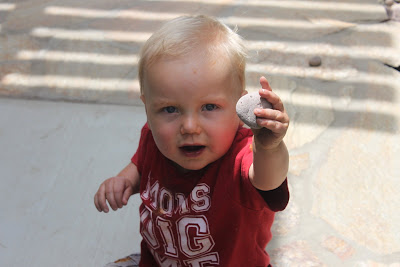 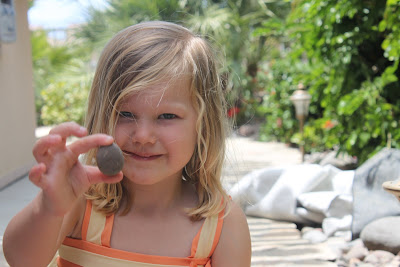 And lastly, we discovered that there is a mini-golf course in my parents' division (their place in Palm Springs is on a golf course). The kids had a lot of fun, mostly watching daddy hit balls and me try - and lose them. As many of you know, Bodie will not be permitted to play hard contact sports (like football and rugby) and may have other limitations as well - all dependent on him. So, we've decided he can either be a world championship bowler...or a golfer. I'm gonna go with golfing being cooler (sorry to any competitive bowlers who read the blog). So, he got to try his hand at the golf club. We got some really cute shots...
Who knew...even the little guys get pissed off playing golf? 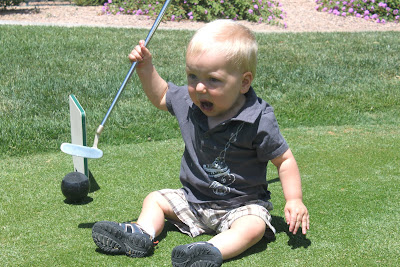 It's all about lining the shot up perfectly... 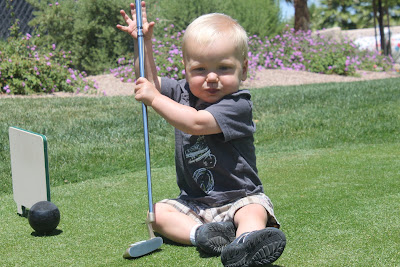 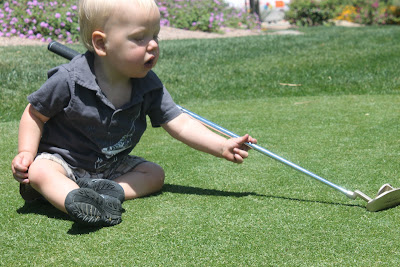 All in all, it was another fun weekend, colds and teething aside. It also held a lot of emotions for me. On Saturday night, we took a little ride in the golf cart after dark. As Sierra was snuggled between Dusk and I and Bodie was comfortably settled against me in the Ergo, I couldn't help but remember the last time we took an after-dinner ride in the golf cart. It was 4th of July weekend last year and Bodie was in the cticu, recovering from his pre-Glenn cath. He had been in the hospital almost 5 months straight at that point and it was the one and only weekend we left town. I was so nervous to do so, but he had an amazing nurse who watched him all weekend. I remember just hoping and praying that one day Bodie would get to make it out to Palm Springs with us. Boy did God answer that prayer!
Then, Sunday was Dusk's birthday and as I was watching Bodie in awe (and exhaustion) at lunch (the stinking kid has figured out how to wriggle out of restaurant style high chairs and he just immediately stands up in the high chair the first chance he gets), I was reminded that last year, he was readmitted to the hospital on Dusk's birthday. I remember it was a Saturday and I was hurriedly frosting Dusk's cake, knowing Bodie and I were headed to the ER in a few hours (he had blood in his stool, so we knew we had to take him in, but it wasn't urgent, so I was getting stuff done before we left) and knowing there was a chance we wouldn't be home that evening. Little did I know that day would be the start of a hospital stay that would last over 2 months and include 2 stays in the icu, 2 separate intubations, 3 nasty infections, a full immunology workup and a cardiac catheterization. I am so glad I had no idea that was coming while I was sitting there innocently frosting Dusk's birthday cake. ;-) So this year, when we celebrated Dusk's birthday, we celebrated the end of a year that started out way too rough and hopefully the start of a much calmer year. :-)
Thanks as always for your prayers and support!