Stand by Your Man

Big Bodie news! In the past week, he started standing all by himself! He is SO proud of himself. It's really cute! Before this week, the only way we could get him to stand would be to trick him into it (providing him really minimal support and letting go when he wasn't paying attention) and he would only hold it for a couple of seconds before falling over. OR, he would wet noodle the second we even tried. But last weekend, we were up at my parents and he was cruising around a chest. I asked him if he wanted to let go and he looked at me and totally let go! He's been doing it more and more ever since and did it for 20 seconds today! And he just grins from ear to ear and squeals while doing it. It is so cute. :-)
And, in other big Bodie news, he's adding teeth. In true Bodie fashion, he's going bigtime and cutting a lot at once. Last week, he cut tooth #11 and 12 and this week, he's cutting #13 and #14 right now. AND, he's been grabbing the other side of his mouth and crying all day, so I'm guessing #15 and #16 are right around the corner as well. Hmmm...last time it was 6 teeth in 6 weeks. Wonder if this time around it will be 6 teeth in 3 weeks? Crazy stuff. Please pray he cuts these teeth quickly!
And in mommy news, I finally lost this hideous boot this week! (ain't it a beaut?) 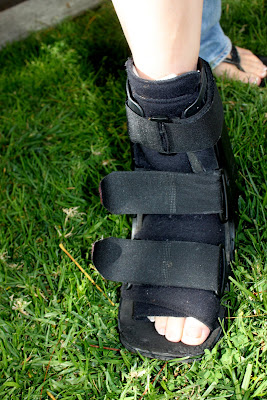 YAY!!! Now, I'm in a post-op shoe for hopefully just a couple more weeks. (Today, at Target, I ran into a woman wearing a boot similar to what I had been in - she had fallen trying to get into a cab. You should have seen her face when I mentioned I had been in a similar boot, she asked how long and I said "3 months." I thought she was going to start crying (she's only been in the boot 2 weeks). Oops.)

I have been TERRIBLE about taking pics of the kids lately - just a lot going on. But here is one I snapped with my cell this morning at Target. 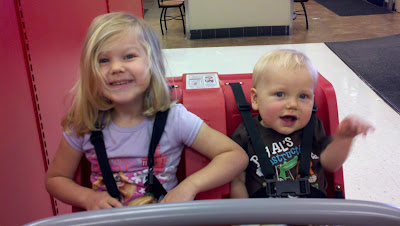 I thought it was cute because you can see how much Bodie has grown just in the past 3 months, when this pic was taken (also at Target, of course - the surburban mom's crack). He's looking so much more like a little boy and less like a baby these days! 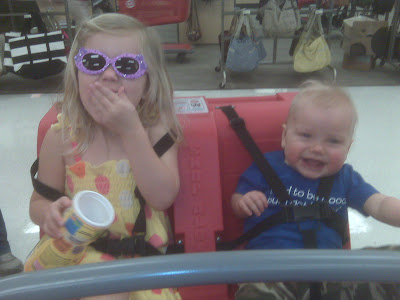