Yesterday, we were playing with friends and I was sitting on the floor doing a puzzle with Bodie (who, as an aside, if you ever need a puzzle-piece taste tester, is quite good), Sierra and some of the little boys. One of the little boys looked over at Bodie, and then me, and asked "Mrs. Bennett? Does Bodie really have half a heart?" "Yes, he does" I replied. And, because he's 5, his follow up question was "why?" I explained that was how God made Bodie. And, again, because he's 5, his next question was "but why?" I explained that God makes each of us unique, and some of the things that make us unique can be easily seen from the outside, and some of them are hidden deep within us. We went back and forth for some time until I finally came up with an answer that satisfied his curiosity - or he just got tired, I'm not sure which. I think it was somewhere around the time I explained that God wanted to use Bodie as a living testimony to his grace, and that God had a special plan for Bodie and that's why he gave him a half a heart.

The conversation made me so sad. Not because this sweet boy was asking - I mean, he and his whole family have been praying for Bodie since before Bodie was born, so of course, he's going to be curious and want to understand why God made Bodie the way he did. But it made me sad because he was asking questions I don't have answers to. I don't know why God only gave Bodie half a heart. I wish every single day that things were different, that God had chosen to give him a whole heart, that my son would never have to face the limitations and life decisions that will always be governed by having a less-than-perfect heart. But God chose to use my son in a mighty way, and his half a heart is what is allowing God to do exactly that. The Christian side of me is excited, thrilled to be a witness to that, for my son to be a living, breathing testimony to the sanctity of life and God's greatness. But for the human side of me, the mother who realizes what makes her son special will likely be what takes him from her prematurely, and just wants to watch her son grow up big and strong and have a family of his own someday, it's a hard pill to swallow.

And the other reason the conversation made me sad is because, now, Bodie isn't old enough to understand what this sweet little boy was asking. But someday he will be. Someday, he'll be sitting there in full comprehension as other kids look at him with a quizzical look and ask why he has a half a heart. Someday, he'll be "the different one." And that's hard, because I know a time will come in his life when he will want to be anything but the different one. I can only hope and pray that, when that time comes, Dusk and I will have instilled in him such a strong sense that God made him for a special purpose that he'll be able to weather the questions and the uncertainty.

In the meantime, we just continue to love on our own little miracle and try to raise him as "normal" as possible. My dream is that, when he's bigger, and people ask about his heart, he'll just shrug his shoulders and say "yeah, I have a half a heart. So what? Let's go play..." :-) 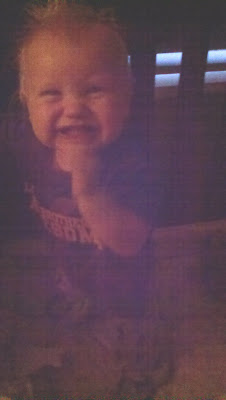