Any heart mom can tell you that it doesn't matter how you rearrange them, those 3 words never mean anything good - and they are never accompanied by any emotion other terror and a desire to vomit. Yet, this is where we found ourselves last week.

Bodie had a regular cardiology appointment scheduled for this week. A 3 month check-up. For the past month (really, since we'd weaned his Sildenafil down), he'd been a bit "bluer" and more winded than normal. His sats, which had been comfortably in the mid-80's, were sitting more in the mid 70's to low 80's. I had planned to talk to his cardiologist about it at this next visit, to discuss whether perhaps we should go back  up on the Sildenafil (we had originally come off of it entirely, but he hadn't tolerated it very well, so then we'd gone back on a very low dose).

But then, he had a rough week last week. He had a tummy bug over the weekend when we were out in the desert, where he'd thrown up a couple of times and had diarrhea for a few days. Since then, his oxygen saturations had been even lower (low 70's, sometimes dipping to high 60's), he was definitely more blue and sweaty than usual, he had been having days with multiple bouts of arrhythmia (prior to this past week, he had gone almost 6 weeks without an episode of Tachycardia, which, for him, was nothing short of a small miracle), he hadn't been eating much, and the crankiness, oh, the crankiness. I was kinda losing my mind, so you can imagine how bad it was. Something clearly wasn't right. His body wasn't happy. I was scared. All I could think was Congestive Heart Failure.

So I called his cardiologist on Thursday to see whether she wanted to see him sooner. Sure enough, she did. She figured the symptoms we saw last week were likely the result of dehydration from the tummy bug, which could absolutely cause both low sats and arrhythmias. Apparently, Glenns don't like being dehydrated, and they have a harder time when their fluids are low (something to do with the smaller blood volume they have to begin with). BUT, with everything we were seeing, she didn't want to wait to see him, so she squeezed us in yesterday for an emergent appointment, echo, ekg and holter monitor.

It's putting it mildly to say that my heart was in my throat. Most of the time, I think I got this heart mom thing down pretty well. But days like yesterday, I definitely didn't feel like it. The week leading up to cardiology appointments are hard anyway (one of my fellow heart mom friends said it took her 5 years to realize that it wasn't PMS, but anxiety she was having prior to cardiology appointments! Ha!). But they're so.much.worse when you're seeing troubling symptoms and you're afraid of what they mean. (I want to say Dusk and I finished a bottle of wine at dinner every night last week - and I am not usually a big drinker - if that tells you anything about where my stress levels were!) I think it's because it's such a slap in the face reminder that your child is medically fragile and no matter how healthy he looks, he has a very compromised heart beating inside his "normal" looking little boy body. It's just hard all the way around.

But I am BEYOND relieved and happy to report that his appointment went great! Not only has he grown another inch (37 inches and 31 1/2lbs, putting him in the 50-75% for both height and weight - not bad for a kid who didn't even make it on the charts before his Glenn!!!), but he was satting 87 (nice, Bodie - way to make it look like mommy was making up symptoms just to get you in quicker!) and both his ekg and echo looked fantastic! His heart function looked great, he has no triscupid regurgitation (which is really good news), and only "a whiff" of aortic insufficiency (which he has always had - it's so minor that sometimes they can see it and sometimes they can't). She seems to think everything we saw last week was likely a result of dehydration and now that he's replenished his fluids, he's much better. THANK GOD.

We talked a little bit about his meds and decided to go up a bit on his Sildenafil, to try and keep him comfortable until the Fontan, and hopefully buy us decent sats for another year. Depending on the results of the 24 hour holter monitor, we may start talking about weaning him off the Amiodarone (which would be AMAZING given the scary possible side effects of Amiodarone!), because the Atenelol (the beta blocker he is on) seems to be doing a better job of preventing his tachycardia than the Propranolol ever did - so our hope is that Atenelol alone might be enough. Prayers for that would be appreciated!

To celebrate the great appointment (and Sierra's first week of Kindergarten going so well), we went to the park and out to ice cream with one of Sierra's best friends from preschool and her little brother (whose family is moving in the next couple of weeks - story of our lives, right?!?)... 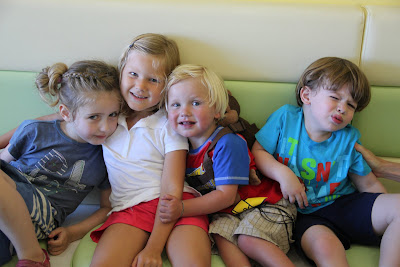