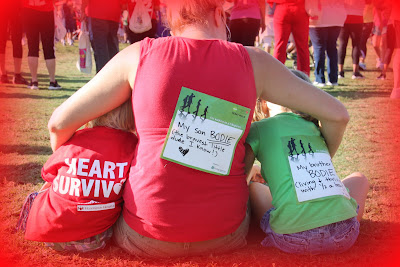 Today, I made the spur of the moment decision to do the American Heart Association Walk with the kids (I say "spur of the moment," since I had registered the kids and I, but didn't know until this morning whether we were actually going to attempt the drive from LAX to Pasadena over "Carmeggedon" weekend (for those of you who don't live in SoCal, it's a weekend where they close down one of the busiest stretches of freeway in the entire US - everyone freaks out and is told to either leave town or stay home, but avoid the freeways at all costs)). The good news is that because everyone else was busy leaving town or staying inside, the freeways were pretty clear and it was smooth sailing both to and from Pasadena! That was a lovely surprise!


But the walk. Oh the walk. It was our first Heart walk and let me tell you, it was emotional for me. I literally cannot put into words the emotions that swelled within me when I put Bodie's "Heart Survivor" shirt on...and then watched his little pint-sized body dance around in it in excitement. 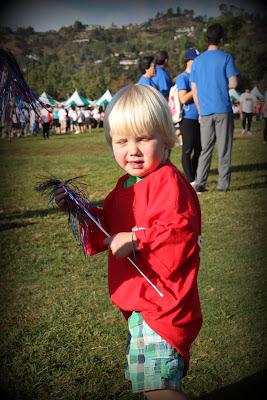 Actually, I was in tears twice within the first 30 minutes of getting to the walk (of course, the second time may or may not have been because I went to chase Bodie down and turned around to find out I had lost Sierra in a huge throng of people - I was literally calling her name, sobbing, with a huge wash of panic setting over me. She turned up 2 minutes later (over by the dance area) and was pretty befuddled to find me crying. But, like I said, that may or may not have happened).

But all in all, it was a great event. Both kiddos did ok, although there was an exhorbitant amount of whining from a certain 5-year old (not that I can blame her; I mean, it was literally like 1,000 degrees out (I should have titled this post "Walking on the Surface of the Sun") - but still, even justified, it was annoying), but otherwise, they did great. Sierra walked most of the event and Bodie walked a little of it. I would have let him walk more (goodness knows, he wanted to), but I didn't want to be there until next Tuesday. ;-)

We got to see a few other heart families and their special heart warriors and that was cool. And we got to hug some of our favorite nurses and therapists, which was awesome! And we got a LOT of oohs and aahs over our signs: 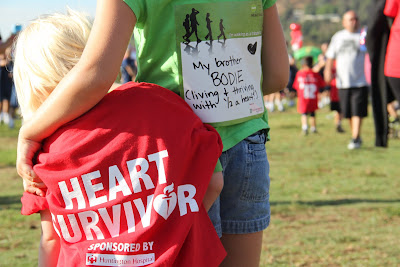 And Bodie's (on the stroller) mentioned his 3 open-heart surgeries, which definitely prompted a lot of conversations. Doing our part to raise CHD awareness!

I cannot think of a better way to spend the almost 3-year anniversary of his diagnosis (but more about that on Monday)! 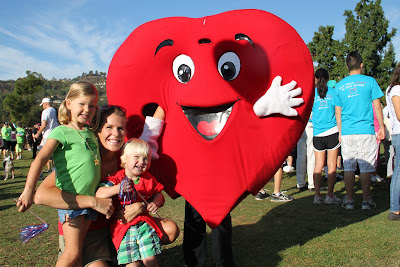