Today was not my favorite day.

Actually, today was a completely craptastic day. Bodie was able to get his picc line, but not until 4pm, after having been npo since 8am since "it's going to happen soon!" (the poor kid spent the better part of the day crying about how hungry and thirsty he was - ah, the joys of hospital life), and after blowing 1 iv and having 2 more unsuccessful stick with finally a successful one following. I was in bed with him, helping to hold him, while 4 or 6 medical professionals held down all 4 of his extremities in an attempt to place an iv solely to get sedation meds in for purposes of his picc line placement.

Far worse even than having to hold him while he was put under for surgery. That at least was overwith quickly. This was probably at least 15 minutes of him screaming and thrashing while I helped the doctors hold him down. He was sobbing. I was sobbing. It was something I don't EVER want to repeat.

After they got the iv in, I snuggled him into me, saying "it's ok, Bodie. Mommy is here. Mommy is here." as if that somehow could comfort him. How on earth could that comfort him? Hadn't I just been there, unable to protect him, while doctors were assaulting his precious little body? Hadn't I participated in the assault? I know it was a necessary evil, but even so, my mama's heart is a little lot broken right now.

As a mom, all you want to do is to protect your children, to shield them from the pain in the world. And CHD robs me of my ability to do that. Sure, no parent can truly protect their child from pain. But there are not many parents of 3-year olds who have to be a party to what we've been asked to be a party to over and over.

Now, Bodie is passed out in a bed in the CTICU, on 2 liters of supplemental oxygen and in EAT, from what I can tell. We're waiting for him to wake up to wean down his 02 and send him back to his room in CV Acute. They hit him with a fair amount of heavy sedation meds, so it'll probably be awhile before he wakes up.  The nurse just removed the iv in his foot and he didn't even flinch, so I think we'll be here awhile.

As far as the infection itself, the culture has grown a type of staph, either MSSA or MRSA. Our hope is for the former, but, even so, we're looking at a significant course of iv antibiotics. What type of antibiotic, and what duration of the course will be done inpatient vs. at home remains to be seen. We should know more in the next few days, as the culture is finalized and we see how soon the wound itself heals. It's looking better and less inflamed, but even so, there's still a ways to go to it healing completely.

So, today was not my favorite day. Probably not even one of my favorite 100 or 1,000 days. Praying for better days ahead - and a better update once he's back in his room. 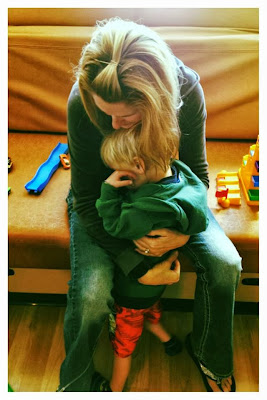