We should have known better...

Yesterday, Bodie gave us quite a scare. You'd think we'd be used to it by now, used to this roller coaster ride he likes to remind us we're on. But nope. He.gets.us.every.time.

To say that he had us "a bit worried" is like saying he looks "a bit blue" in this picture, taken last week. 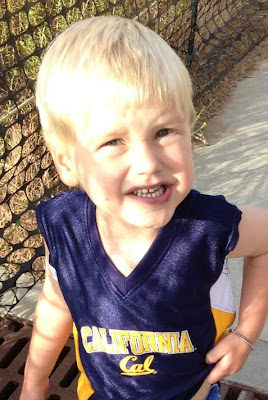 In reality, I may or may not have been so freaked out I was sitting in my kitchen last night, sobbing into my glassbottle of wine.

Let me back up.

When I last updated, Bodie's EAT had set back in and we were gameplanning how to treat it. Well, after that, he spent the next 4 days in EAT. All day, every day, with a break to ride his pacer at night. His body doesn't like EAT in general. And it likes prolonged EAT even less. By the end of the week, his sats were low and he was fairly blue and winded. Mama wasn't happy. 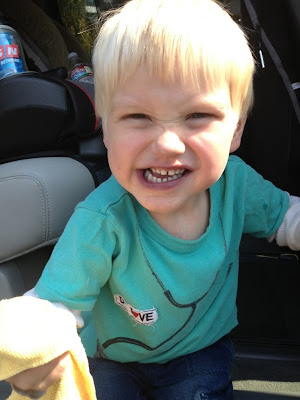 Get a load of them purple lips!

So we changed up his meds on Sunday and the EAT went away...For 57 blissful hours...During those 57 hours, his sats didn't go up that much, but enough - and his entire disposition improved. You could tell he felt SO MUCH better. His coloring was fantastic, and he was literally eating us out of house and home.

And then, yesterday afternoon, all proverbial Hell broke loose in his little body and, for some reason (we have no idea what triggered it), all of the sudden his lips turned dark purple and I knew something was up. I hooked him up to pulse ox and he was satting 65 with his heartrate in the 160s. And the poor kid sat in the 60s with his heart racing for 4 or 5 good hours before the Atenelol kicked in and his heartrate dropped and his sats came up a bit. That was about when I found myself in the kitchen with my wine glassbottle. All I could think was "are you flipping kidding me? We sent a blue and winded kid into surgery with the assumption that we would get a pink and nonwinded kid out. So WHY are we still dealing with this, a month post-Fontan???" Demoralizing was the best way to describe it.

It took us talking to Bodie's cardiologist yesterday and her squeezing Bodie in today for a full cardiology workup to piece together what happened. The good news is that Bodie's echo today looked fantastic - he had no fluid buildup whatsover, no tricuspid valve regurgitation and his function looked beautiful. So, our best guess is that, for whatever reason, yesterday's EAT episode caused him to have a pulmonary hypertension attack. I should have expected it, but for whatever reason, I didn't. Had I been expecting it, I think I would have freaked out a little less last night.

Bodie has a history of pulmonary hypertension, where his lung beds clamp down and won't allow the necessary blood through. There's a lot of theories on why kids develop this; in Bodie's case, it's likely due to extra connective tissue lying over his Atrial Septal Defect in utero, causing an effective restricted ASD and increasing his pulmonary vascular resistance. That last sentence was for my heart mom friends and those in the medical field. For everyone else, just know that the way his heart developed in utero was hard on his lungs and because of that, they don't like to get messed with. Open-heart surgery definitely "messes" with them. When they get messed with, they tend to fight back, by getting really tight and not allowing adequate blood flow through.

For about 8 months after Bodie's Glenn, he struggled with 2-3 pulmonary hypertension episodes a month, where his sats would drop to the 60s for a couple of days, and then bounce back up. Since he's always been a lower satter and came back up on his own, his cardiologist was ok with us monitoring at home. So we maxed him out on Sildenafil and prayed that he would outgrow it. And he totally did. The last episode he had was summer 2011. And we weaned his dose down to next to nothing. So, we shouldn't be surprised that we find ourselves in pulmonary hypertension land again post-Fontan. We're learning that this is just how Bodie's lungs respond to surgery.

So, today's cardiology appointment was helpful for a number of reasons:

Pulmonary Hypertension
We definitely are seeing PH attacks. He's already on a hefty dose of Sildenafil. So we're going to continue it and, ifwhen he has another attack, we'll give him an additional 1/2 dose of Sildenafil to help him through.

EAT
We don't know why the EAT caused the PH attack yesterday, or heck, even if it was related. For all we know, it could have been purely coincidental. What we do know is that the all day every day EAT isn't doing him any good. As far as I can tell, it's preventing his body from recovering from the Fontan the way it needs to. So, for now, we need to be aggressive in getting it under control. So, we restarted the Amiodarone tonight. Not our first choice, but for now, our best choice. Once we get his PH under control, then we can talk about weaning the Amio again and see where we're at. But, at 3 weeks post-op and dealing with twitchy lungs, we don't need to be taxing his body by asking it to deal with one more thing.

The Fontan
From what we can tell, his heart and body really like the Fontan physiology. We took him off the lowfat diet over the weekend and he's now back on a regular diet. He's eating great, and, when he's not in EAT, his energy levels are fantastic. Overall, his color is better. His liver (the area typically affected by the Fontan) is happy so far, sitting right where it should be. And his body had no issues with the first diuretic wean. Since no fluid has build up in the 2 weeks since that wean, we dropped the Aldactone today (another diuretic) and cut his Lasix (his last remaining diuretic) in half. To be perfectly honest, between the hospital stay, the low-fat diet and the diuretics, the poor guy is so scrawny. In the past month, he grew an inch and lost 2 pounds. He is SO skinny. Today, we had lunch with our dear HLHS friends Lucas and Michelle, and Lucas (2 years old) kept saying "Boney" instead of "Bodie." Michelle kept correcting him, but really, he was just saying what we all were thinking. ;-) So I'd love to see him gain some weight back. Hopefully, coming off the diuretics will help with that.

So, our overall picture? Things have been stressful the last week. More stressful than we'd like. He's doing well. We're so grateful for how well he's doing. But we definitely needed to make some changes to make this new phsyiology work for him. We're feeling better tonight and hoping and praying for things to continue improving from here on out.

And in related news (as in, related to the topic of how Bodie's CHD has completely ruled our home this summer), this was Sierra's picture in response to "What I did this summer." 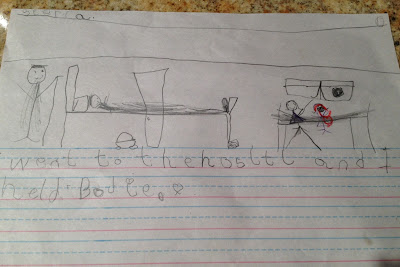 We went to Tahoe, spent time with both sets of grandparents and spent loads to time in Palm Springs this summer...and what she remembers is "I went to the hospital and I held Bodie." Sigh.

Please pray
1. The combination of Atenelol, Propranolol and Amiodarone keeps the EAT at bay.
2. The pulmonary hypertension episodes become less and less frequent.
3. His sats come up to a more comfortable range.
4. He responds well to the diuretic wean.

Thank you, as always, for praying for our sweet warrior. 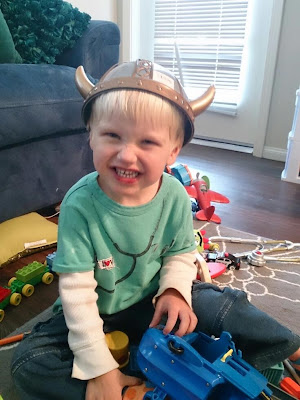