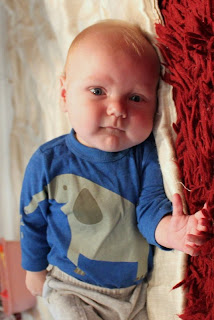 (can you believe these cheeks?)
Finally, finally, finally, little man is back on the growth chart! (For those of you who don't obsess about underweight children, most doctors will say they're "not on the chart" until they hit 5%, which is the lowest curve they put on the chart). Bodie hasn't been on the chart (weight-wise) since he was about 2 months old. He's been thisclose during each of his last cardiologist appointments, and at today's appointment, he finally made it! He's now at 5% for weight and a whopping almost 50% for length! I'm so proud of our little guy! Since he started sleeping through the night (so missing a feed essentially - only somewhat making it up during the day) and rolling anywhere and everywhere (so expending ridiculous amounts of energy), his weight has really plataued. Although his cardiologist wasn't concerned (that's kind of what happens at this age), I'd like to see him continue to climb the growth charts. So please pray that his eating picks up enough to compensate for his high level of activity. Man, this kid is ACTIVE. I mean, always rolling, kicking, legs flailing, you name it. I need some of whatever he's on. Oh wait, that's breastmilk. Ok, maybe not. But you get the idea. ;-)
Heart-wise, he still seems to be stable, which is good news. His cardiologist noted on his ekg today that his pacer is not only pacing his atrium (which is what it's supposed to be doing), but also was pacing his ventricle (which we'd rather not have it doing - it's better for the ventricle to be doing the work out of its on volition). She's not sure whether it was just today that it was happening or if that's a trend we're seeing with him, but in any case, it's definitely a new thing not seen on previous ekg's. We have an appointment next week with his electrophysiologist, so we'll talk to him about it then. If it is happening, it might be a side effect of his Digoxin (the heart med he's on to help with heart squeeze and function). If so, then we'll need to wean him off of it sooner rather than later. He was just recently put back on it since his heart function was lower than usual on his last echo. If we do end up needing to wean him off of the Digoxin, please pray that his heart function will be fine without it (hopefully, his body just needed it temporarily as his heart was recovering from surgery).
As far as his meds go, we weaned him off his Reglan a week ago and he's tolerated that really well (he was on it for stomach motility, but doesn't seem to need it any more). We're also starting the wean on his dieuretics. YAY! He's now on Lasix twice a day, and we'll go down to once a day tomorrow and hold there for a week. If he tolerates it well, then we can come off of it entirely after that! A lot of heart kids don't need Lasix after the Glenn - please pray that Bodie is one of them. Other than that and the open issue of Digoxin, he'll remain on his other meds for the foreseeable future (probably for a very long time, actually): Aspirin (most kids can come off this after the Glenn, but because he threw a clot as they were closing him up after surgery, he's stuck on it), Propanolol (for his heart arythmias), Enalapril (to preserve long-term ventricular function) and Sildenafil (for his pulmonary hypertension).
Speaking of his good old pulmonary hypertension, that seems to be easing up. He's still having episodes of it (is in one at the moment actually), but isn't going quite so low with his sats (will dip to the mid or high 60's, but then pops right back up) and is generally satting a bit higher. This week, in fact (before his current episode of hypertension), he was satting in the mid-80's all week. That's great for Bodie! Please pray that his pulmonary hypertension will resolve itself so that we can eventually wean him off of his Sildenafil as well!
In other news, we seem to be seeing (or rather, hearing) some serious improvement in his vocal cords! Praise God!!! Just in the last week the kid has started making some serious noise! It's actually a bit unnerving, only because we're not used to hearing that kind of noise coming from him! And he's having some serious fun trying to recreate the sounds he's making. It's very cute. We have our first ENT appointment this Friday to re-evaluate the vocal cord. It's just a consultation, so I don't know if they'll even scope his cord (stick a tube down his throat to evaluate cord function), but they'll likely refer us for a swallow study. Please pray that both the scope and swallow study show significant improvement for Bodie!
Whew, I think that's it (for now at least). I'll update after our ENT appointment on Friday. In the meantime, thanks for all of your continued prayers - we know that's why little man is doing as well as he is! And here's one final pic of Bodie and Sierra recently. LOVE these kids: 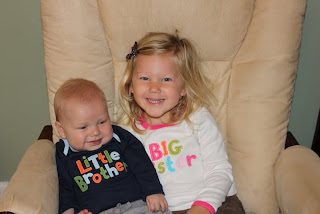