The strong and silent type...

I think you all know Bodie has vocal cord paresis of his left cord. His was a result of either his first surgery or intubation. Since his intubation wasn't that long (only 10 days - that's not too long by hospital standards although it felt like an eternity to us), it was probably more likely due to the surgery itself. Vocal Chord Paresis like Bodie has occurs as a result of cardiothoracic surgery often because a nerve that innervates the left vocal cord (left recurrent laryngeal nerve), is in close proximity to the aorta (the aortic arch specifically). Since the entire aorta is rebuilt during the Norwood, it's more common with that surgery than any of the subsequent surgeries.

In any case, because the vocal cords act as the mechanism for protecting the airway (the vocal cords cross one another to prevent liquids from going down the trachea), the vocal chord paresis can cause someone to aspirate liquids down into the lungs. In Bodie's case, his left cord, although weak, worked enough that he was able to tolerate thickened liquids. Thus, everything that goes into his mouth (meds, fortified breastmilk, etc.) has to be thickened using a nectar substance. His voice has gotten stronger recently, so we have some reason to believe some healing has occurred to that vocal cord, and we'll be having a repeat swallow study done in the next few weeks to confirm that. Please pray that Bodie's vocal cord heals SOON so that we can stop worrying quite so much about it!

In true Bodie/Townes fashion, ever in a competition to see who's had it the worst (man are these boys going to have some stories to swap when they're older!), Townes now also has left vocal cord paresis as well, likely due to the extensive arch reconstruction done during his surgery. His unfortunatately is severe enough that he is silently aspirating (i.e. showing NO signs that the liquid is going into his lungs) even the thickest liquids. As a result, he will be on a restricted liquid diet until the cord heals. He is luckily allowed to eat solids; but he will need a feeding tube for liquids (to prevent dehydration). He is scheduled for a g-tube (PEG type - percutaneous endoscopic gastrotomy) surgery tomorrow morning. PLEASE pray that:
1. The surgery goes well (he will have to be intubated for it - please pray that no further damage is done).
2. His spirits improve. I can only imagine how difficult it is to take a 21 month old who is used to drinking with every meal and between meals and to tell him that he can't drink anymore. TOUGH stuff. We know that he will get used to it - just pray for his (and his entire family's) spirits as they adjust to this new normal.
3. That stinking vocal cord will HEAL!!!

So, in the meantime, as Sara and I say, we'll be having some quiet playdates with the boys... 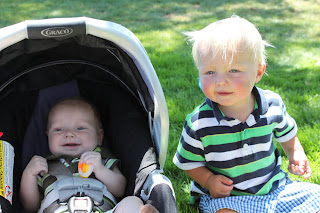 But it's ok, because the big sisters talk enough for all 4 of us! 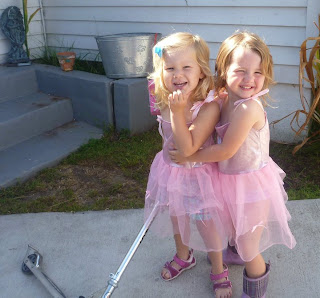