So, remember my last post where I mentioned Bodie was getting a med change up to deal with his EAT and that med change would require a hospital admission that we were trying to schedule for the last week of the month? Well, Bodie heard that and decided he had other plans. When he had this 3rd tachycardic episode this week as we were taking Sierra to school this morning, we knew something had to be done. So off to CHLA to be admitted we went.

Because the decision to admit was made so last minute, we weren't able to be directly admitted to the floor and had to go through the ER - never fun. But our awesome cardiologist called ahead so they had a bed ready for us when we were done with the ER admission (I didn't realize what a big deal that was until we got there and I mentioned we were going to CV Acute. The nurse looked at me and laughed, saying "oh, honey, there's no way you're getting a bed on CV Acute - they are all full. Sorry." 10 minutes later she came back and said "Oh, I didn't realize that your cardiologist called ahead. They're getting a bed ready for you right now!" Just one more reason we love our cardiologist!!! And to CHLA's credit, as much as going to the ER sucks, we were immediately triaged and into a private ER room within less than 10 minutes, thankfully. They take their cardiac kids seriously here, which I really appreciate.

He zonked out once we got there. 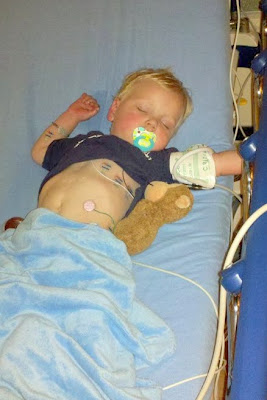 He, of course, was out of EAT by the time we got there (his episodes typically only last 2-3 hours, so we weren't surprised). But once he woke up from his nap, all it took to throw him back into EAT was a bad attempt at an IV placement. :-( His heart rate shot right up to the 190's and stayed in the 180's after that. Poor baby. I told them there would be no more iv attempts unless they were done by an IV nurse. They were really cool about honoring my request and said they'd just do it on the floor.

Once we got to the floor, Bodie was all smiles, checking everything out and saying hi to some of our favorite nurses. All was well and dandy until I'm sitting on the fold out bed, kind of getting everything situated and he walks over to the other side of the crib. I'm not paying too much attention until I hear an alarm sounding. I saunter over there, thinking he had pressed the call button for the nurse or something like that. It's only when I look up to see doctors and nurses literally sprinting toward our room that I look over at Bodie to realize that he has depressed the code blue button!!! Yes, he really did. I'd like to thank the genius designer of this room who decided to put the code blue button at toddler level...

After the whole code blue fiasco, we got settled in, had dinner and walked the halls for a bit. Here he is goofing off after bath tonight (I LOVE the private rooms, where I can give him a bath!) - I kept telling him NOT to lick the bars (I mean, disgusting, right?) and he was totally pretending to do it here... 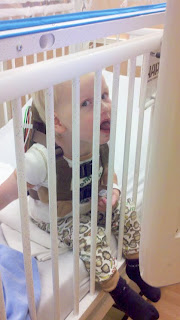 They finally got a good IV in tonight, and oddly enough, Bodie was so upset that he kicked himself back out of EAT. Go figure. ;-) After that experience, he's now snoozing peacefully. 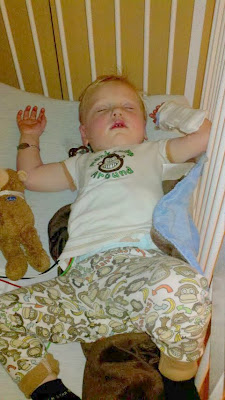 They just took vitals at 9pm and told me they would schedule his morning vitals around 5-6am, if I wanted. LOVE how flexible they are being here!!!

So here we are, at least 2 days, if all goes well. The have to monitor Bodie very carefully to make sure his body tolerates the new drug. So far he seems to be doing ok with the first dose. The med they put him on, Amiodarone, is a serious med. It has VERY serious side effects, mostly major compromises to the lungs, liver and thyroid, not to mention photo sensitivity. Bodie kinda seems like the poster child for who you DON'T want on this med - he has lung issues already, I have a thyroid issue, with Fontan kids you always have to worry about the liver anyway - oh, and he's a flipping Toehead. Fantastic. BUT, it's sort of our best option. The other med they were considering is Flecainaide, which isn't that great for single ventricle kids, can cause decreased heart function and a slightly greater risk of serious arrythmias.  So there you have it. With cardiac kids, you often are making the choice between the lesser of 2 evils, because there are so many non-negotiables when it comes to their care. The reality is that Bodie needs a med that will get this tachycardia in check. Amiodarone seems to be our best option at the moment.

BUT WE ARE SCARED. Frankly, the possible side effects scare the living daylights out of us. The doctors tell us the side effects we're most worried about (lungs/liver) are actually quite rare in kids receiving the smaller dosages like what Bodie will be getting (and they did baseline bloodword today - general cbc plus liver and thyroid tests). But, of course, if your child falls in the minority, it is of little comfort that he "shouldn't have" had a problem with the med. SO, please, please, please, we implore all of our faithful blog followers to intercede on Bodie's behalf, and ask God to protect Bodie from the side-effects of this drug. Please pray that Bodie will tolerate the new drug, his EAT will stop and he'll be able to come off the drug soon (it's not really a long-term drug - Bodie's Electrophysiologist anticipates that he will be on it no longer than 6 months). So please keep him in your prayers.

And, while you're at it, if you could ask for an uneventful hospital stay so that we can be home in time for Bodie's birthday next week, that'd be great as well!