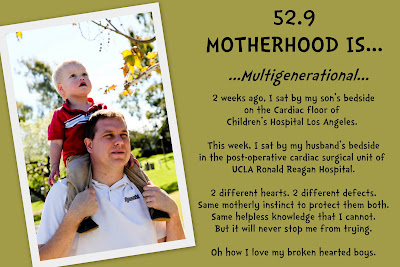 So I know I'm not technically the "sandwich generation" yet (you know, where you're sandwiched between caring for aging parents and growing children at the same time), but I am definitely in my own little cardiac sandwich, if you will, sandwiched between my cardiac loves, caring for both. :-) I had the opportunity to take care of both of my cardiac loves in the hospital the past few weeks.

My LITTLE Cardiac Guy
Since his hospital admission, Bodie has had a great few weeks. I took the kids with me up to the Ella Gives Back event up in SLO (Sierra had a "date night" with Grandma Peg, so I only had to chase 1 kid around - a HUGE shout out to Grandma Peg for helping us out so much!). Bodie had a GREAT time at the event, running around like a madman and (hopefully, at least) impressing upon everyone the importance of research and how great these kids really can do. Here are a few pics from the festivities... 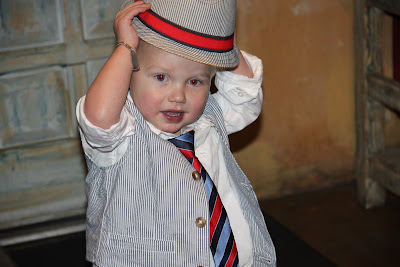 My little dapper man, all gussied up for the event. I gotta say, his outfit was a HUGE hit, even when he was all soaked from having leaned all the way over into the fountain one too many times! 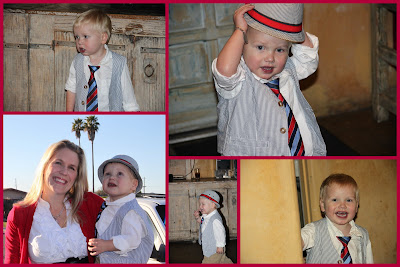 Here was Bodie with the guest of honor, Baby Ella, 5 months old. (Don't mind the frat boy look - he had just thrown up all over himself (too much candy and running around, I'm afraid - definitely not a "mother of the year award" moment for me!). 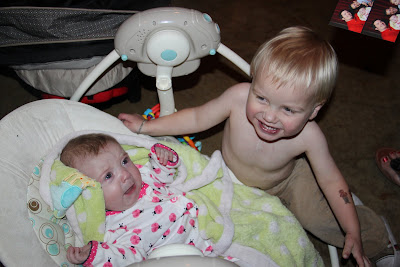 And if you want to know why Bodie looks so stinking thrilled with himself while Ella looks absolutely horrified, see below (click on it to see the full size 12-step pictorial to how Bodie stole his kiss from Ella): 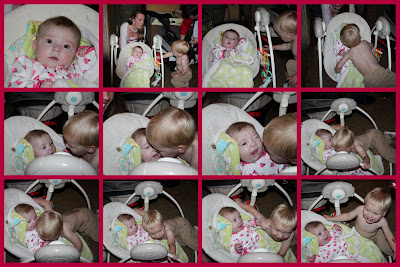 We had the privilege of driving to and from the event with the amazingly inspiring Jeni Busta, a 26-year old HLHS survivor!!!

We had a great time - thank you Melissa and Brady for allowing us to be a part of such an amazing event!

We had to race back to town for a cardiology appointment. So far, Bodie seems to be tolerating the new drug well and he should be close to therapeutic levels by now. We've gone 8 days now without an EAT episode, so we're hopeful that the med is working (the week before and after we switched him to the new med, he had 3 episodes each week, so to go 8 days is HUGE progress for him). His function looks great and the echo showed nothing of any concern. We talked a great deal about Fontan timing and surgical centers, but I'll spare you all those details for now. Just know that the Fontan will be on the horizon sometime in the next 18 months, give or take. Overall it was a great appointment, with good news all the way around.

My BIG Cardiac Guy
Daddy did not have quite the stellar past few weeks that Bodie had, I'm sorry to say. :-( Dusk had his ICD Pacemaker surgery last Tuesday and, while the surgery itself was a success, the wires went exactly where they were supposed to go and they were able to create an arrhythmia that it immediately responded to (to test it out), his recovery has been tough. He spent just a little over 24 hours actually inpatient at the hospital and has been recovering at home since. He has been in a great deal of pain. As the incision pain started to abate, he started developing lower chest cavity muscle cramps. At about 10pm last night, he was in A LOT of pain, but decided he thought he could hold out until this morning to go the ER. But at 1am, in a matter of minutes, the pain moved from the lower chest cavity to all over his chest, and particularly centered right around his heart. The pain was debilitating. Needless to say, our plan of going to the hospital got moved up - stat. Besides, who wants to wait until the morning to go when you can wake the kids out of a dead sleep, throw them in the car, drive the whole family to the ER at 1:30 in the morning, drop daddy off, drive home and then spend 2 hours trying to get a certain feisty 2-year old back to sleep? Next time we have to do a middle of the night ER trip, we're leaving Bodie at home. (And if you work for DCFS, I was only kidding about that last comment!)

Dusk spent the rest of last night in the ED, undergoing a whole host of tests (ICD interrogation, chest x-ray, EKG, pulse ox, multiple blood tests and a ct scan). The overall conclusion is that they really have no idea what was causing the pain, but at this point, they know it's not a heart attack (which honestly is what Dusk was afraid was happening as we were driving up there - very scary) or an embolism (which he is at very high risk for just by virtue of having non-compaction of his left-ventricle; let alone recovering from surgery, being fairly immobile all week due to the pain and not having restarted his blood thinners post-operatively yet, all of which are general risk factors anyway). The general thought is that it's just his muscles not responding well to the ICD placement and we just have to wait it out for them to readjust. In the meantime, we're trying (fairly unsuccessfully, but trying nonetheless) to manage it with round the clock alternating Vicodin/Advil dosing and ice. If his symptoms worsen, we have to go back to the ED.

So there you have it. Both of my cardiac loves giving me a run for my money. If you would, please keep us in your prayers. Pray that we are able to get Dusk's pain under control so that he can be on the road toward recovery with no additional hospital admissions. (Oh, and if you'd like to be on our short "you can totally call me in the middle of the night in an emergency to help out with your kids" list, please do let me know. We promise not to abuse it, but we would like to avoid having to take the kids with us if it happens again (and I'd like to not have to drop my husband off outside the ER and hope he makes it inside, when he may or may not be having a heart attack).)

Thanks so much for your love and prayers! We so appreciate it!