Musings on an inpatient hospital stay with a toddler

Our nurse today said that toddlers are the terrorists of the hospital - they want what they want, they're not afraid to make demands, they take no hostages and they absolutely will not be reasoned with, but because they're cute, they keep letting them in. ;-) And to that I say "amen, sista." But more on that in a sec.

First up, an update on this little guy. 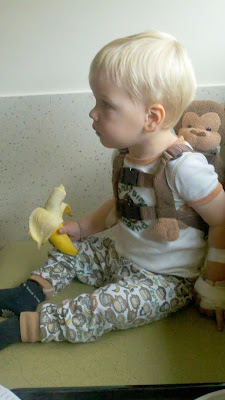 He definitely had an interesting day. After his 2nd dose of Amiodarone spit all over me and everyone in a 10 mile vicinity (and this stuff is GROSS - I mean, like the baby wipes don't even touch it kind of sticky) yesterday, I turned to our nurse and said "enough. Find another way to get this med in. Call the pharmacy please and see if we can get it in a tablet form that we can crush and mix with his other meds." Because this med is gross and of epic proportions (for you med junkies out there, it was a 12ml dose - yes, you read that right. It was the equivalent of 1 1/2 times all of his current meds added together. I don't think he'd have taken that much of a med that tasted like Hershey syrup, but it definitely wasn't happening with something that, in addition to being astronomically large, tasted disgusting apparently. Just wasn't happening.

After a little sweet talking (with the pharmacy to agree that we could cut the 100mg dose in 1/2 safely and the cardiologist/EP to agree that we could drop the dose from 60mg to 50mg for an even dose), we were on our way. So, he finally got his first dose entirely in yesterday afternoon at about 5pm. At the same time, he came off of his Propranolol, the beta blocker he's been on since August. We figured the real test wouldn't be whether he had problems coming of Propranolol, since it clearly wasn't working - the issue would be coming onto the Amiodarone. As Dusk said "yeah, it'll be like coming off sugar water."

Well, sadly for us, that's not exactly how it went down. At about 8am this morning, as Bodie was hugging his night nurse goodbye (she was AMAZING), his heart rate shot up, out of nowhere, from his baseline 80-90 to 210...and proceeded to sit over 200 for the better part of the day. Awesome. Truthfully, I hadn't seen it that high since he had his first EAT episode last August, when they decided to put him on Propranolol.

Although it was pretty unsettling for us (and VERY nerve-wracking for his nurses), Bodie didn't seem particularly upset by it, nor were the cardiologists. They kinda figured it's what we'd expect to happen since the Propranolol is now out of his system, but the Amiodarone, with a MUCH longer half-life, hasn't built up yet. So, they really have 2 theories - (i) the Amiodarone just needs time to build up (it takes a good 2-3 weeks to get fully loaded with it) and that's why he had the episode today, or (ii) he just might be a kid who needs both Propranolol and Amiodarone. In the interest of not keeping us in the hospital 2-3 weeks to figure out which theory pans out, they opted for #2 and restarted his Propranolol on a lower dose. Within 30 minutes of receiving the Propranolol, he dropped out of EAT and has stayed in normal sinus rhythm since. Looks like it was a good call by the cards. :-)

So we're not sure where that leaves us at the moment in terms of discharge. Hopefully Bodie can behave himself and we can be convinced the combo of the drugs is working and we can be home within the next few days. But you never know with Bodie. If you could please pray that the EAT episodes get under control so we can go HOME, I'd really appreciate it!

And speaking of Bodie behaving himself, I have to say that being in the hospital with a toddler is a bit mind-numbing. A few observations I'd love to share with you on being inpatient with a toddler:

1. A toddler's attention span lasts approximately 15 seconds. When you're at home and he has a multitude of toys to play with, it's not that noticeable. But then you're locked in a small room with a limited number of toys, it becomes readily apparent.

2. One would think there would be upper limit on the number of times a Veggie Tales song could be played in a 24-hour period, but if one was talking about "The Water Buffalo Song," one would be sadly mistaken.

3. Toddler rules of "if I see it or have ever thought about seeing it, it's mine" still apply, even in a hospital setting - even if said item is another child's wagon currently housing said child's blankets and oxygen tank.

4. What constitutes "dinner" is directly proportional to how badly you want your toddler to eat. When your child has been in EAT and not eaten anything all day, 2 chocolate hearts, a handful of nuts and a sip of apple juice definitely constitutes a meal.

5. It is best not to tell your toddler any rules of the hospital, for as soon as a toddler hears of the rules, he will want to break them as soon as possible. Case in point: the ONLY time we are supposed to stay in our room is 7-7:30am and 7-7:30pm to ensure patient confidentiality during shift change. So, of course, Bodie deemed that THE perfect time to run out in the hallway in front of the charge nurse's station in nothing but a shirt, diaper and socks, yell "dance! Dance!" and start dancing in a circle as fast as he could.

6. The playroom is never open when you need it (who needs a playroom to be open on a Sunday? What do you mean, kids get antsy on Sunday, too? Phsh) - and the playroom coordinator, when asked if you can borrow puzzles for your 23 month old boy, will most certainly drop off puzzles of this variety, with many, many interlocking pieces with no discernible way of knowing what pieces go where. 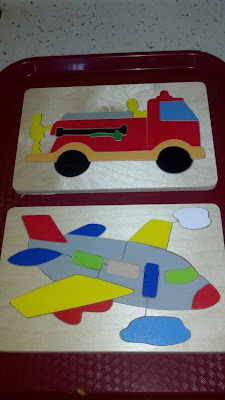 For real? It took ME 20 minutes to do the darn things!

All jokes aside, it is tough to be here with a VERY mobile and VERY energetic toddler. It is hard to keep up with him when he just wants to constantly explore his environment and gets bored very easily. But the reality is that we knew when we decided to give our son life that we were buying into a life that would necessarily entail hospital visits at one point or another. And hospital visits are never fun. But I can say, honestly, this hospital is amazing. They have done so much to make it accommodating to families (even our night nurses only do vitals at 8 or 9pm and then not again until morning - as long as your child is stable enough for that!). And having all private rooms means that you're not getting woken up for either your own child's vitals - or your neighbor's! It is SO quiet in here. I mean, our door was not opened once between 10pm last night (when I went out to ask for Bodie's nighttime meds) and 6am this morning (when I went out to get coffee). Our room was SILENT - even though we are literally right across from the Nurse's station! It never ceases to astound me how well they've thought this hospital out (well, except for the whole placement of the code blue button!). And, if we're stuck in the hospital, I'll take it with a feisty, determined little boy any day. Praise God that he has the energy to run away from me as quickly as he does!!!

Please keep Bodie in your prayers, that we have no more runs of EAT, that we're home soon and that he has no side effects from any of these drugs Thank you prayer warriors!!!