So, I love when God moves in our lives, making little exclamation points as He does. Moments where he has tried to whisper something to you, but you've totally ignored it, so he's been forced to take more drastic measures, whacking you upside the head with a 2x4 and knocking you out. When you come to, you're left wondering "how the HECK did I not see that coming???" I had one of the those moments this weekend - 2 of them, actually. Both with the same point. How cool is that?

Lesson #1: Bad behavior begets bad behavior
On Saturday morning, we were doing last minute prep for Sierra's birthday party. (Our big awesome 6-year old, by the way, grew 4 inches in the last year and is now 95% for height and 75% for weight!!! She will SO thank me for these genes someday, although not until she's well past Jr. High I imagine.) 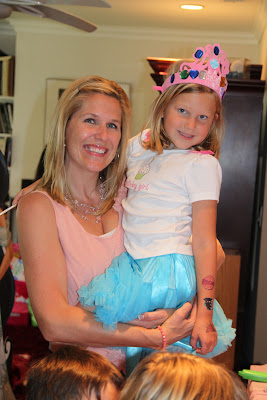 Anyway, party planning stresses me out. A lot. I mean, A LOT. It kinda turns me into a crazy angry woman really quickly. It just brings out my worst triggers for anxiety - being late and overscheduled, which, no matter how much planning I do ahead of time, always describes me the morning of parties. I am notoriously super snippy to anyone who tries to help me. My parents, in fact, have made it a point to try and come right before the party starts (as opposed to coming earlier to help) because they don't want to get yelled at. Sad, but totally true. Dusk, unfortunately, on account of actually living with me, does not have the same luxury. He's kinda stuck here, dealing with me. And, given that my Fontan anxiety is already off the charts and I had a pretty stressful week last week anyway, you can imagine that I was not pretty Saturday morning. I believe it may have been around the time I was yelling at Dusk because I couldn't put the stupid castle together (you know, the one that claimed it was "easy to assemble"- I'd like to meet the person who thinks this castle was "easy") that he turned to me and may or may not have said the following:

"Hey, I have some Ativan left over from my surgery. I'm not telling you that you should or shouldn't take it; I'm just saying it's up there in the cabinet."

Like I said, he may or may not have said it. But in any case, you get the picture. It wasn't pretty. I KNOW that this is my thing, my Achilles heel, that I have to get under control. And truthfully, it had gotten better a few years ago. When I recognize my triggers (overscheduling, lack of sleep, stress in other areas of my life), I can manage them and work on it. But my anxiety has just been in such overdrive lately that I'm having a hard time controlling much of anything, particularly this embarrassing aspect of my personality.

Fast forward to this afternoon, I'm trying to get Sierra out the door to go grocery shopping with me, and she literally starts screaming at me (in a not very nice tone, I might add) to wait for her and that I'm NOT ALLOWED to leave without her. Dusk just looked at me and said "gee, I wonder where she gets that from." I felt so convicted. I know kids learn what they observe in their parents and in their homes. Truthfully, I'm not certain where I learned it from since neither one of my parents are irrational screamers (though word is that I may have come by it genetically further up the line of grandparents). But there is NO doubt that Sierra is learning it from watching me.

Lesson #2: Good behavior begets good behavior
Today, I had an awesome opportunity to do a Mother's Day photo shoot with an incredible photographer, Brenda. I had a friend in from out of town and was telling her all about it and asked when she last did professional pictures with her kids. She looked at me like I was crazy and said she never had. Let me tell you about my friend - she is AWESOME. She is this incredible Godly Christian woman, working her butt off as a single mom. I think single moms are the most under-appreciated people on the planet and Kelly is one of the most amazing moms, single or married, that I have ever met.

It took me all of 2 seconds to offer my session to her and let the photographer know that I was gifting my session to Kelly. What was stunning to me is that both Kelly and the photographer seemed amazed that I would have done such a thing. It was such a no-brainer to me. It ended up not working out for Kelly and we ended up keeping the session after all, but the whole thing really got me thinking. Why does giving to others come naturally to some people and not to others? (By the way, I don't mean to imply that either Brenda or Kelly are not giving people; I have no doubt either of them would have done the same in my shoes - but the fact that they were surprised tells you how many people we all encounter every day who aren't giving by nature.)

And it made me think about the example my parents set for my brother and me growing up. I feel incredibly lucky that my parents have always been civically minded. Now don't get me wrong - my parents weren't perfect. As I tell my father when he questions how I discipline my kids now, "you had your chance to screw up a generation. This is mine."

But, in terms of service, my parents were spot on in the example they set. From a very young age, I can remember my dad serving on the Chamber of Commerce, and in Rotary and later, founding and serving in Men's Club; all along the way, he was always working booths at carnivals, selling tri-tip dinners and helping out wherever he was needed. Similarly, my mom was always in AAUW, she taught Sunday school, she was on the Advisory Board for Kappa Alpha Theta up at Cal Poly. And both of my parents chaperoned numerous events when I was in high school. I never really thought about it; seeking out ways to give back to others was just a fabric of our family.

So, as an adult, I have always taught Sunday school, participated in charity walks, did work days at church, and generally sought out ways to help others. And choosing to specialize in nonprofit accounting and my work with Sisters by Heart have all been a part of that spirit. The spirit of giving just comes second nature to me, I suppose. Utilizing opportunities to show Christ's love to others is just what it's all about. And I think my brother would whole-heartedly agree. As an adult, he, too focuses on serving others where he is able to. What an awesome legacy my parents will have left us both in instilling in us an understanding that we are here to serve one another.

Lesson #3: Which Behavior Will You Lead With?
In having both of these "aha" moments this weekend, I could really sense God stirring my heart to think about the legacy I am leaving my children. Am I modeling a crazy neurotic overscheduling freakazoid who takes out her anxiety on those closest to her...or a genuinely good mom who seeks out opportunities to give to others? I sure hope it's the latter.  What a great reminder to me, in all of the ways I live my life, to remember that my kids are watching, and learning, and modeling their lives after me. My greatest prayer is that I am found worthy of that incredible calling.