Pacemakers are great...until they're not.

So, here's the thing about pacemakers. They're wonderful, amazing, (in Bodie's case) life sustaining devices. But, they're exactly that - devices. They're a foreign object put into a human body. And, when infection sets in on a pacemaker, it can wreak havoc on the body, potentially creating a life threatening situation. Because the pacemaker is a foreign object, if bacteria settles into it, the body can't fight it off - the body's own immune system can't attack it. Infections can get seriously out of hand. So, when there is even a threat of infection, the medical response has to be really aggressive.

This morning, I noticed a white spot and red inflamed skin around Bodie's pacemaker incision site. I toyed (for maybe a second) with calling the pediatrician to have him seen, and then thought better of it and called CT surgery. Once I sent them a picture, they wanted to see him right away. So, we found ourselves in the cardiology clinic this afternoon. After 2 NP's looked at it (and again reiterated the seriousness of pacemaker infections), they had the surgeon weigh in as well.

The consensus? Although it looks like it is likely superficial, we don't know for sure - and you cannot be too careful with infections near the pacemaker. So, they admitted us for iv antibiotics. Although it seems to be spreading and getting worse as we sit here, we are hopeful that we caught this very early (this literally popped up overnight - it looked FINE yesterday). They put in a peripheral iv tonight (luckily, they got it in the first try), but will be replacing it with a picc line likely sometime tomorrow. They are hitting Bodie with some heavy duty meds (Vancomycin and Zosyn) which are known to blow piv's left and right. In the interest of not having to repeatedly replace iv's, we're ok with the picc line.

Our best case scenario is that Bodie's body responds very quickly within the next 24-48 hours and we see the redness and puss diminish. If that happens, then we'll be looking at 5-7 days of IV antibiotics and then, hopefully go home on oral antibiotics. If his body doesn't respond, then they'll likely open his incision up, drain the pus, culture it and go from there.

We have a lot of worst case scenarios in play, and all of them involve more trips to the OR. One of the worst would be that the infection has been brewing for some time and runs not only to the pacemaker (in his abdomen) but also to the wires (attached to his heart). If that happens, they would have to remove both the pacemaker and the wires (yes, this would requiring opening his chest again), clean everything out, let it heal - and then put in a new pacemaker and wires. Yes, this would be repeating his last surgery. And yes, during the time it is "healing," Bodie, because he is pacemaker dependent, would be inpatient using temporary pacing wires attached to a box. We all remember how well that went when he was post-Fontan.

I know, I know - I'm getting ahead of myself. It is more likely a superficial infection and iv antibiotics alone will kick it in the butt. But the truth is that we don't know. And we want you to understand just how serious this has the potential to be, and why we are so scared and unsettled about it all. Because we ARE scared. Yes, we know that God is in control and we're praying like crazy. BUT WE'RE STILL SCARED.

Bodie is doing fine with the admission. 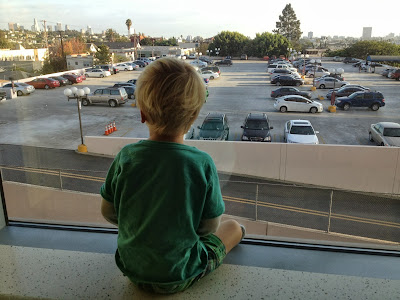 Other than some tears upon finding out (and lots of questions about why he had to stay and when we can go home), he is faring quite well. Mommy had a little breakdown when they told us their fears of how serious this could be and that they were admitting us. To say that being readmitted was a letdown, is putting it mildly. It stinks. Big time. Daddy and Sierra are hanging in there - Daddy got to hang with Bodie this evening while mommy ran home to pack our bags. Sierra got to come up for a few minutes tonight to see Bodie and he was SO SO excited. The nurse said his excitement made her week. :-)

Tonight, please pray that Bodie's body responds to the IV antibiotics. Oh, and he also has an ear infection - pray we can get some drops and get that gone as well. What can I say? Around here, when it rains, it pours.

And, a quick shout out to my dear heart mom friend, Melissa, who let me literally sob into the phone with her right after we found out we were being admitted. I so needed a friend in that moment, and I am forever grateful that she was that friend.

And a quick shout out to the awesome Spelbrig family, who picked Sierra up from school, did homework with her and took her out to dinner with them! She had so much fun, I think she'd have stayed there all night if she could have! THANK YOU for taking care of one of our babies so we could focus on the other!