So, Bodie has a picc line. But, ya know, we're not the kind of family to sit around and do nothing just because he has a picc line. So...in the past week and a half that we've been home with the picc line...we haven't so much been "at home." With the blessing of the Infectious Diseases team, we've administered his meds, tucked it up into his shirt and went on living our lives.

We've been to the museum (pretty much Bodie's favorite place on the planet) twice. 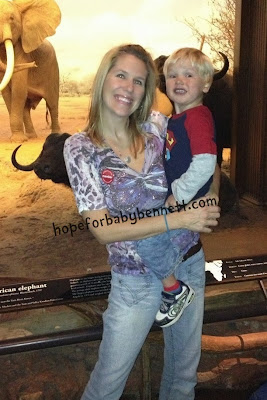 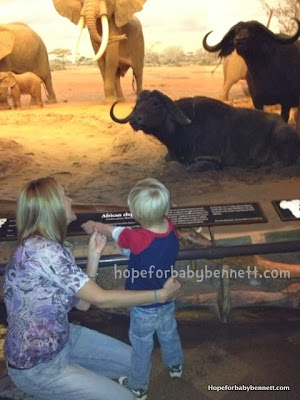 (Bodie was showing his "best friends," the water buffalos, his picc line. He usually shows them his scars as well and tells them all about his hospital stay.)

We've gotten a haircut - MAN did this kid need it! 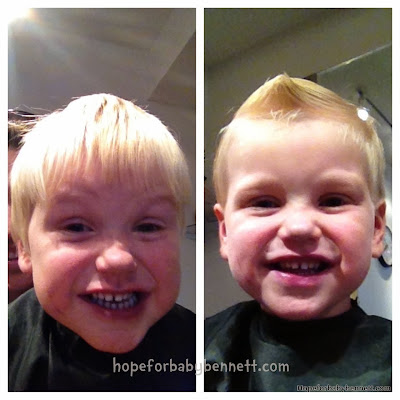 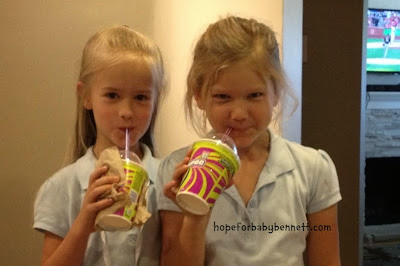 (When we headed into 7-11 to get slurpees, I had Sierra, her bestie Anna, and Bodie (with his iv antibiotics running and the bulb sitting in his back pocket) in tow. As we were leaving, all loaded up with slurpees, Bodie tripped and dropped his slurpee on the floormat by the door. The lid popped off and spilled a little. He of course flipped out. The owner told us to go ahead and refill it. So Sierra, in her oh so helpful way, ran back to get napkins to help clean up. As she was sprinting back to help, she, too, tripped and fell, spilling her slurpee ALL OVER the front entryway. It was at that point that they suggested we might like to use a cupholder. I'm pretty sure they were never so happy to see someone leave their store. True story.)

We've been to Hometown Buffet. Twice. 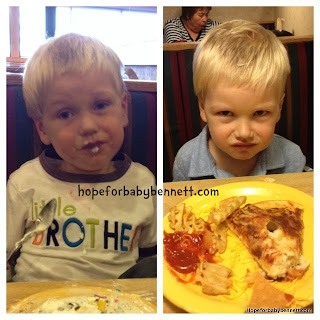 Gross, right? But what can I say? The kid loves it (even if it doesn't look like it!).

We've done a Costco run and capped it off with their amazing frozen yogurt. 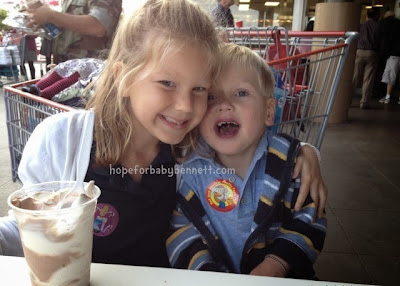 We've been to and from waaaaay too many doctor's appointments - Pulmonology, Pediatrician (for flu shot) and ENT this week alone! 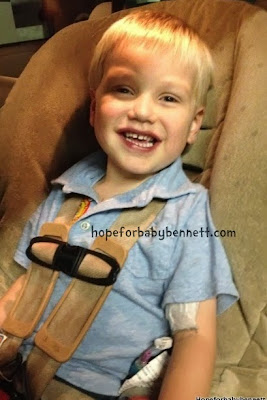 So, even though my last 2 posts may make it seem like we do nothing but sit down and worry about Bodie, that's not entirely true. Although, we have done a fair amount of that as well...

Speaking of the little dude, he's doing ok. His sats have been a little better the past 2 days, and his color and disposition have both been much better. It's been a nice break for him - and for us. It's way too soon to say whether it's an upwards trend vs. just an aberration, but we'll take it for now. THANK YOU for all your prayers - they've definitely helped! I've had multiple conversations with Bodie's cardiologist and at this point, we have a plan, which makes me feel MUCH better.

We now have Bodie on 02 at night and have gone up on his Sildenafil. And now we watch and wait. We give him a week or two to see if he can hold his sats in a 75-85 range. If he can, we can continue to watch and wait and see if he can continue to increase his sats before further intervention. If he can't, and drops back down to the 60's (where he was earlier this week), then we'll be headed to the cath lab pretty quickly here to see what's going on. We have a strong suspicion that Bodie may have developed a collateral in response to higher Fontan pressures. If so, they can coil it in the cath lab and we should see his sats increase accordingly.

So, we definitely have some prayers for our little man tonight:
1. Pray for his body to make it clear which route we will take - watching and waiting, and allowing him to recover on his own OR heading to the cath lab. What we are really balancing here is the risk in going to the cath lab (not a terribly risky procedure, but it is invasive and he's still pretty fresh out from open-heart surgery, so there is definitely some degree of risk) vs. watching him potentially limp along in his recovery when the problem could be solved relatively quickly in the cath lab. So please pray for guidance.

2. Pray he can stay out of EAT. As his EAT episodes become further apart, the toll they take on his body become more apparent. He becomes angry and very easily triggered. And he doesn't eat much. Pretty much, it's not fun for anyone. It is becoming more clear that his body REALLY doesn't like being in EAT. Please pray we can have a good solution to it.

Thank you so much for continuing to pray for our sweet boy! It means more than we can say...