The one where Amy whines a little (or a lot)...

In February, a few days before Bodie's birthday, our house was broken into, with the kids and I coming home to a complete sense of violation.  March brought Dusk's first hip replacement surgery. I say "first," because we know he'll be having his other hip replaced by the end of this year, likely right before Christmas.

May and June brought sicknesses and a rescheduled cath, along with what seemed to be a successful, but was ultimately an unsuccesful ablation of Bodie's arythmias.

July brought a very scary Tahoe trip.
August brought not one, but two, open chest surgeries for our sweet boy.
September brought another week in the hospital with an infection.
So far, October is starting out with a picc line and a scary cardiology appointment.

Does anybody need a drink besides me?

Anyway, I'm getting to my point. My point is that we are spent. Completely and totally exhausted. We just don't have the reserves to manage much else at this point. So, when I see Bodie not recovering as easily and nicely from his Fontan as most of our Fontanning buddies, I get a little jealous. And maybe I fixate on it and make a bigger deal out of it than it should be, just because mentally I'm not completely in the game.

The IV antibiotics themselves aren't that tough (I mean, it's not like I'm dismantling a bomb - I'm just pushing meds through a syringe). But, on top of everything else, it's A LOT.

Bodie is doing ok. Just ok. Not great. Emotionally, he's happy as a clam and loving life. And we are so grateful for that. But physiologically, he's just not there yet. Certainly not nearly as well as most of our friends. Frankly, his sats are nowhere near where we would like them to be or where they should be. He's still frequently blue and winded. Yesterday and this morning he found himself in another EAT episode followed by a pulmonary hypertension attack and was satting in the high 60's and low 70's again. I was completely and totally deflated and our awesome cardiologist was able to squeeze us in today to see us.

The good news is that his issues don't appear to be cardiac. His function is great and he doesn't have any fluid buildup. Which means his heart likes the Fontan, which is good. And it leaves our most likely culprit to be his lungs. It's a bit confusing since his pressures going into the Fontan were great. But it's possible his lungs just really didn't like being messed with and they're letting us know in no uncertain terms. And for the Fontan to work well, you have to have happy, compliant lungs, which Bodie definitely doesn't have at the moment.

So...we're going to change things up a bit. It's not clear whether the problem is vasculature or airway in nature. So we're hitting it from both ends. We're going up on his Sildenafil to hit the vasculature angle (pulmonary hypertension) and restarting Xopenex treatments to hit the airway. Please pray with us that his body will be responsive and his lungs can start to relax.

We're worried about Bodie. Worried enough that we now have 02 at home in case we need it. Man, it just feels like such a huge deflating step backwards. We took a blue and winded boy into surgery, expecting to get a rosy pink, full of breath little boy back. And instead, we got an equally blue and winded boy back, except that now his blue and winded body is trying to recover from open-heart surgery. It stinks.

It's so hard not to compare Bodie to his Fontanning buddies who, even those who had complications post-op are doing awesome now, all pink and rosy and running around like typical kids. But then, as my mom reminded me earlier today, Bodie isn't like the other kids he Fontanned with this summer. Truly, he isn't.

I'll let that sink in for a minute.

So, perhaps our expectations are too high. Perhaps it's not fair to expect a child
with pulmonary hypertension,
and known major unexplained rhythm issues,
and a history of c-diff, paraflu and MRSA,
who spent almost his entire first 5 months of life inpatient,
who had not just the Norwood and Glenn (like his fellow Fontanning buddies), but also a shunt revision and pacemaker placement in between,
who had 2 open-chest surgeries in 4 days and is only 7 weeks out from that last surgery,
who is recovering from a staph infection, and
who is on IV and oral antibiotics

to recover at the speed of light and be satting really well and doing fantastic already. But, as his mom, dangit if I don't want that for him. I want him to be running and not be out of breath. He deserves this, after everything he has been through. 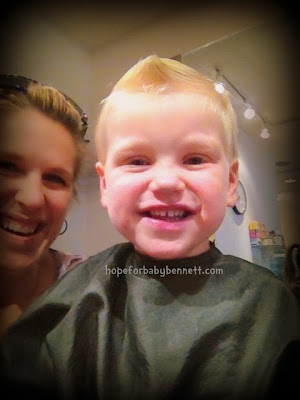 But we know different. And we want more for him.

And please pray for Dusk and I. Pray for us to turn this worry over to God. Because it's a tough road trying to handle all the worry ourselves.  We're both exhausted and our reserves are completely depleted. We're running on empty and in desperate need of replenishment, of our family catching a break, of us having an opportunity to truly catch our breath. Please pray for us to find that, to find peace amidst the chaos, grace amidst the pain and fear.