We got discharged yesterday evening!

But not before Bodie faceplanted onto the cement floor, giving himself a nice goose egg in the middle of his forehead. Did I mention that we're on Lovenox (major, heavy duty blood thinner) injections 2x a day until Sunday night? His nurse literally started crying when she heard. She was afraid he gave himself a brain bleed. 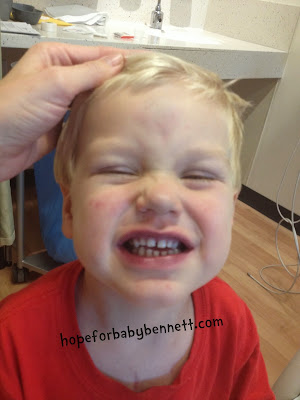 Tonight, he fell backwards on our bed and smacked the back of his head on my laptop. This, folks, is why we fight the hard fight against Coumadin every time. His lifestyle is just too "risky" for a longer course of Coumadin.

So now, in addition to iv meds, I know how to distribute shots. Something else I never thought I'd learn. ;-)

Bodie's doing well, but it's too soon to know whether the stent truly helped him. Clinically he looks good. His color is great, his hands and feet are warm (new since the stent placement), his energy is fantastic and he was in a great mood all day. 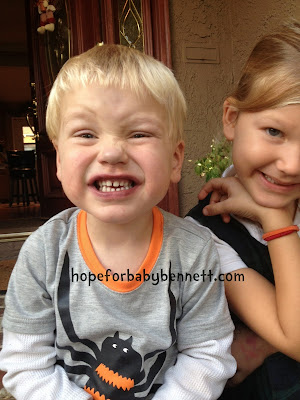 But his sats are still hanging way low - low 70's mostly. it doesn't really make sense, to be honest. I'm not really sure what to make of it. Our pulse ox could need to be calibrated. I mean, really, it could. It's new, but even so. It's been known to give me a swing of 10 points between extremities, which doesn't even seem possible. Tonight, it told me he was satting 62, as I was looking down at very pink, very well profused toes. So, it's possible. Weirder things have happened. I have an email in to the company to get that done.

Or it could just that he is satting that low and his body is just settling out. Bodie's cath doctor says to give him about a week to see how everything shakes out. And he had good days and bad days before the cath. So today could just be a coincidence. Way too soon to know.

We could drive ourselves nuts trying to figure it out.

Today, we went to Hometown Buffet and giggled (and Bodie danced and danced and danced next to our table and inched his way over to the next table, getting so close and almost running into the guy sitting there and making him spill his soda, that the guy actually got up and moved to a different table. True story.) 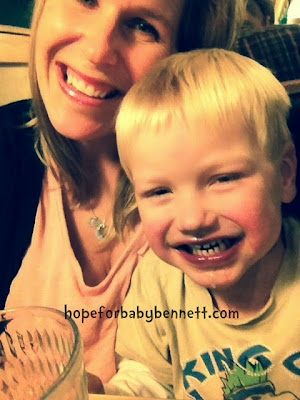 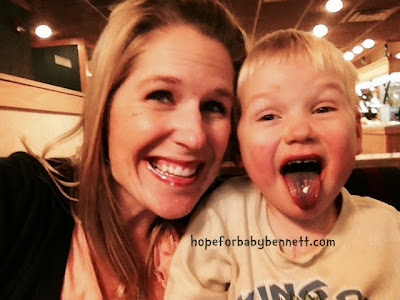 And then we went to AWANA tonight. Bodie's first night back to Cubbies.

The kid was SO freaking upset when I dropped him off. As in, clawing, screaming, thrashing around as I peeled him off of me and left. Separation anxiety much? When I went in an hour and a half later to give him meds, I was early and I got to watch him. He was having SO MUCH FUN (apparently, the sobfest was just for my benefit and stopped approximately 30 seconds after I left).

At one point, I saw another kid grab his arm and kind of hang on him. Bodie, in his sweet high pitched voice, said "No, don't do that! My doctor said you can't do that!" and then proceeded to try and find his picc line (which is no longer there) to show the boy. It made me so glad to hear him stand up for himself, and to be able to do it in a way that is succinct enough that an adult could understand to help him if needed.

When he saw me, he ran up to me, gave me a big hug, took his meds quickly and then happily ran back to his friends.

I thought my heart was going to burst with pride and happiness at that moment.

When I put him to bed tonight, he looked up at me and said "Mommy? I LOVE Cubbies so much. I'm a Cubbie now!!!" with the sweetest blissed out smile.

Please keep the prayers coming for our little man. Pray that today wasn't just a fluke, and that it's a trend toward better days ahead. Pray that his 02 sats come up. Pray that we see better numbers on the pulse ox. And pray that I don't throw the pulse ox out the window before we can get it recalibrated.