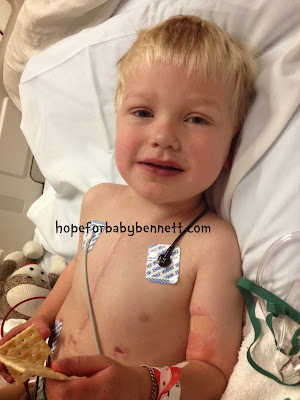 I have been trying to update the blog ALL DAY and literally have not gotten a chance until just now!

The good (short) news is that they did indeed find an intervention they could do in the cath lab. They did it and now we watch and wait, and see whether the intervention is what he needed for his body to settle down. We're now settled in a room on the CV Acute floor, for at least one night of observation due to the intervention.

Now for the long story.

We showed up 30 minutes late this morning. What can we say? It's LA. Traffic stinks. And cop cars randomly raising down Crenshaw with their lights flashing and sirens blaring don't really help the situation any. But whatev. It's not like they were going to start without us.

Once we got into pre-op, Bodie was a dream. Literally. He was SO happy to be here, playing and goofing off. He was squealing SO loud in pre-op that Dusk had to keep asking him to use his "inside" voice. Definitely not what you expect with a kid headed to a cath. We are so blessed with this kid, I tell ya. 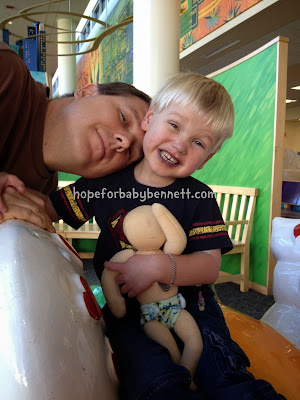 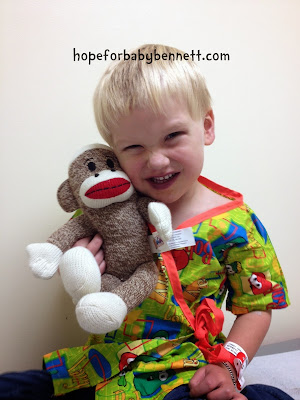 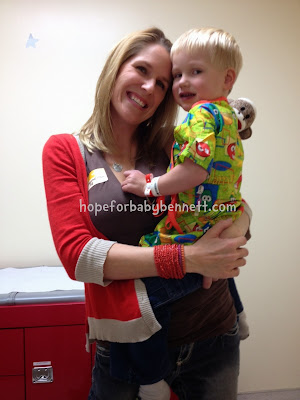 Since we had his picc line, they were able to give him Versed (anesthesia) through the iv instead of making him swallow the (really nasty) oral med. Unfortunately, the iv form goes in so quickly that it can cause double vision. As soon as Bodie looked at me and literally started hyperventilating and recoiling in fear, we realized he was likely seeing 2 of me. The poor kid couldn't get a handle on why there was 2 mommies and 2 daddies. He alternated between crying into my shoulder and opening up his eyes to confirm that there was really still 2 of me and recoiling from me again, until it really kicked in and then he happily snuggled with the cath nurse.

The cath itself went pretty quick. As soon as they took him, Dusk headed out to run some errands and I headed over to Infectious Diseases to settle an issue with Bodie's meds. What can we say? We're the Bennetts and we like to multitask. ;-) We grabbed lunch, I did a few Facebook posts and then they were done.

In a huge answer to prayer, Bodie's left pulmonary artery was pretty substantially narrowed. It should be about 8-10mm wide. His was more like 4-5mm. The narrowing existed pre-Fontan, but didn't bother him too much, so because of that, and a few other, more complex, reasons, they opted not to stent it during his Fontan. But now, because he has a rather large fenestration (5mm), and the pulmonary pressures are higher than his other pressures, if the blood has a choice, it's just going to flood the fenestration rather than work against the pulmonary pressures to push blood through the small pulmonary artery. Confused yet? Dusk and I kind of were. ;-) The long and short of it is, a large fenestration combined with a narrow pulmonary artery can cause 02 saturation issues, which it did for Bodie. The interesting thing in all of this is that his pulmonary pressures (and Fontan pressures) were all within the normal range, which means that the "pulmonary hypertension" which has been consistently blamed for all of his issues may not be as big a factor as we had thought.

So, the cath doctor placed a stent in his pulmonary artery to widen it quite a bit, and also coiled off a small collateral vein she found. It is her hope that, as Bodie recovers (over the next few days to a week), having 2 wide pulmonary arteries to go to (as opposed to 1 wide and 1 narrow) will encourage the blood to go there, rather than out the fenestration. Her plan is to create the most perfect environment she can for blood to go where it's supposed to go and let Bodie's body do what it will.

The plan is to do another diagnostic cath in 2-3 months to see how everything looks. And very likely, sometime in the next year, we'll be having the discussion of whether or not to close his fenestration. Right now, it appears he shunts a lot of blood across his fenestration, particularly when he's in EAT. She wasn't comfortable closing the fenestration if he still needs it due to the EAT. If she did, it could potentially make him very, very sick.

The truth is, we don't know that this will solve the problem. We are extremely hopeful, but we just don't know that Bodie's body will respond the way we like. So we continue to need prayer. Please pray that widening his LPA is just what his body needs to get blood flowing where it's supposed to, rather than through his fenestration. Please pray that we can get a handle on this EAT, which continues to complicate his recovery. And please pray for his recovery from this cath.

His recovery so far has been fairly tough. He's thrown up 3 times already and his sats for the first few hours post-cath were literally all over the place. He would be satting 81 one minute and roll over and his sats would drop to the 60s. 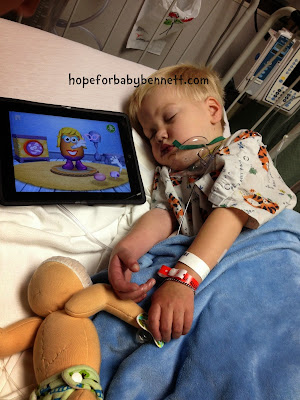 It's gotten much better in the last hour or two, moving into a more consistent mid-70s range. So, it's not a huge improvement over what we walked in with - YET. That is to be expected this close post-cath. Please pray that, as his body recovers, we see both his color improve and his sats increase. 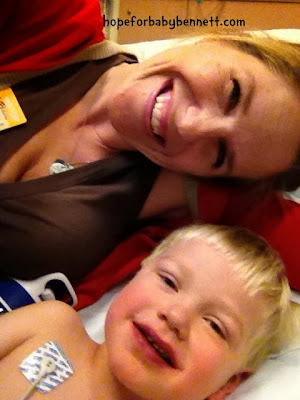 Thank you for all of your encouraging emails, texts and Facebook posts - your support and love means more than we can say!