On why it matters...

Tonight is February 6, the eve of National CHD Awareness Week. Tomorrow is "Go Red" day where you will all be wearing red for Bodie and all of his amazing little heart buddies.

And I'm sitting here, trying to avoid it...like I do every year.

February 7 kicks off an emotional time for me every year. For a week straight, I'm focused on the statistics, the stories, the realities of CHD. My Facebook feed is lit up with pics of sweet heart kiddos and angels. And all of the things I try to push to the back of my mind on a daily basis as we push on in our quest to lead "typical" lives outside of Bodie's heart defect. CHD week culminates with Valentine's Day followed by Bodie's birthday on the 16th and the anniversary of our sweet friend Travis's passing just days later. I try not to think about how serious Bodie's heart condition is, how scary it is, how statistically impossible it is that he's still here and thriving. But CHD week, and his birthday, and Travis's angelversary brings it all to the surface. How lucky we are. How that luck could be snatched from us in a second.

Why all of this matters. Because, this, the wearing red, the CHD statistics, the facts, the pleas to get informed. It all matters. It so desperately matters.

Here is why it matters.

It matters because it's MY SON.
A sweet 3-year old boy who loves Cars (all kinds), quotes lines from Despicable me and Frozen allllll day long, has never met a ball he didn't like and detests learning his letters and numbers (because he can't do them perfectly from the get go). A typical 3-year old boy.

Typical…except for the whole 5 open-heart surgeries, 4 cardiac catheterizations, 5½ months of his life spent in the hospital and 7 medications he takes every day to help his heart beat as effectively as possible.

He is my son, forever a part of my body, of my spirit. I have carried him in my womb, in my arms, in my heart. Like any mother, I want the world for him. I want him not to get tired out playing on the playground. I want the other kids not to look at him and whisper because his sweet pouty lips are perpetually stained a deep purple. I want him to dream big, to do big things with the lousy ½ a heart the Lord gave him. I want to have the same dreams for him that every mother has for her preschooler. Is that asking too much? I don't think so. If you were in my shoes, you wouldn't think so.

It matters because it could be YOUR SON.
Just because it hasn't affected you yet doesn't mean it won't. It could be your unborn son, your newborn grandson, your neighbor's 6 month old baby girl who passes away from SIDS (did you know they estimate more than ½ of SIDS deaths are actually undiagnosed CHDs?). It could be your athletic 16-year old niece unexpectedly collapsing on the soccer field with an undiagnosed CHD.

CHD's don't discriminate. Sure, they like families with a history of it a little bit more, but really, it's only a mild preference. There are many, many, many families who have CHD with absolutely no familial history. Just like cancer, CHDs can and do strike anyone. It could be your family. Don't think for a second that  it won't happen to you.

Did you know that CHD's are the most common birth defect? As in 1 in 110 live births here in the US? In the United States, twice as many children die from congenital heart defects each year than from all forms of childhood cancer combined. Just like cancer can hit your family out of nowhere, so can Congenital Heart Defects.

No one ever thinks it will happen to them…until it does.

It matters because it's a race.
Bodie, and all of the kids like him, are simply running a race against modern medicine. Right now, modern medicine is a few steps ahead of Bodie. He still has options. His single ventricle anatomy will fail. It might be next week, next month, or 20 years from now. But it WILL HAPPEN. Either his heart will fail, his liver will fail, or some other organ will protest. It's just a fact of the Fontan physiology. But today, his single ventricle heart is working for him. Right now, medicine has a few steps on Bodie. He can see the line of modern medicine, inching every so slowly ahead of him in this race, but he hasn't caught up yet. We hope and pray every day that he never catches up to that line, that we never see a day when there is nothing left that medicine can do for him, that we never run out of options.

As things stand today, when Bodie's Fontan fails, his only other option will be transplant. When that time comes and IF he is lucky enough to get a heart, we'll be trading one set of problems for another. As in, we'll face a lifelong battle with possible rejection and re-transplant (did you know heart transplants don't last a lifetime?).

But that's a big IF. And here's why. Indulge me for a moment as we do a quick economics lesson on supply and demand. Today, there aren't nearly enough hearts for those who need them. As Bodie and his cohort age into their teens and beyond, there is likely going to be an influx of new survivors, needing heart transplants.  Way more than there has ever been in the past, because these kids never made it that far before. The upside of saving all these kids with the single ventricle palliation? HUGE. They're getting to live their lives; they're THRIVING! They're going to school, and college, and getting married, and having jobs. Some are even playing sports! It's awesome!!! The downside? An expected large increase in demand for hearts as they age out of their Fontan circulations. An increase in demand on an already over demanded and undersupplied system. You do the math. Or economics.

It matters because there's HOPE.
Yes, where medicine stands right now is pretty scary. But, it's not all bleak. There are a lot of amazing innovations thisclose to being finalized and available to help CHDers, particularly single ventricle CHDers. Ok, maybe not thisclose, but seriously, peeps they're coming. They're close and they are amazing. We're talking stem cells, ghost hearts (that the body won't reject!), and artificial hearts. These things are close and we just need to keep funding them to get them over the hump and available for Bodie and his buddies. It's an exciting, if nerve wracking, time to be a heart mama, that's for sure! If we can keep up the research, the options available to Bodie in 10 or 20 years may be vastly different than the options available to him today.

THIS is why CHD Awareness matters! With awareness comes funding. With funding comes research. With research comes OPTIONS.

Trust me. It just freaking matters.
Are you fired up now? Good, then I've done my job. What can you do to help?

Raise awareness. Spread links to Bodie's blogs, or to blogs or Facebook pages of any other CHD kiddos or adults you know. Make sure everyone knows the warning signs of a CHD.

Donate to research. If you want to donate to research, I suggest donating to the Children's Heart Foundation, who is solely dedicated to pediatric CHD research (unlike the American Heart Association, who gives less than 1% of every $1 raised to pediatric CHD's). Or, you could donate directly to a hospital working hard to advance research in this area. Pioneers who really could use funds for the amazing work they're doing to improve the lives of children living with CHD (and who I personally would support without reservation) are the Mayo Clinic, Children's Hospital of Philadelphia and Children's Hospital of Boston.

Thank you.
Thank you for caring.
Thank you for investing your time, and your energy, and your emotional reserves, into caring for my son.
Thank you for wearing RED tomorrow for him and all of his buddies, fighting this crazy fight every single day.
Please make sure to email me pictures of your red! 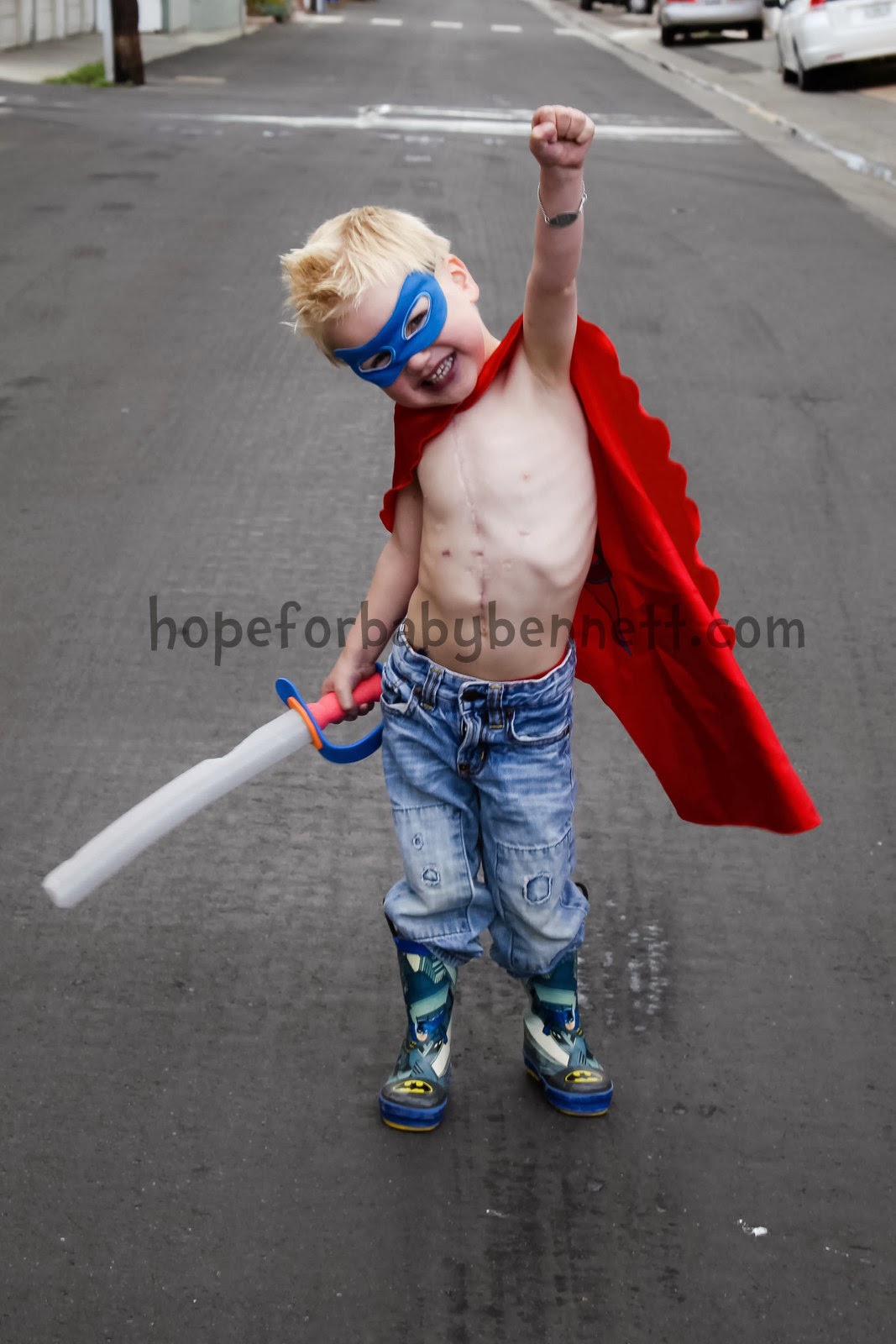