After a pretty uneventful pre-op, Bodie's cath is officially underway!

I have to say, waking up at 4:15 (or, well, you know, 3:50, when I finally gave up on getting back to sleep after Bodie had kicked me awake for the 50th time, and just got out of bed) is no joke. At least for Dusk and I. Bodie, on the other hand, was all chatterbox all the way to the hospital and 100 kinds of flirty with the nurses and docs. What a super kid he is.

So excited for what the day brings! 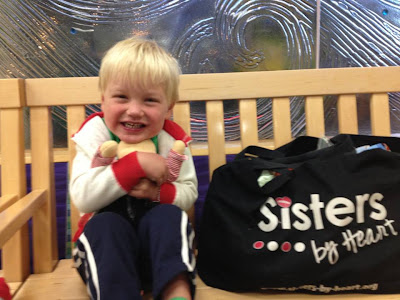 So this shirt might officially qualify under the "name it and claim it" doctrine, but whatevs. We're claiming it his lucky shirt and today his lucky day. 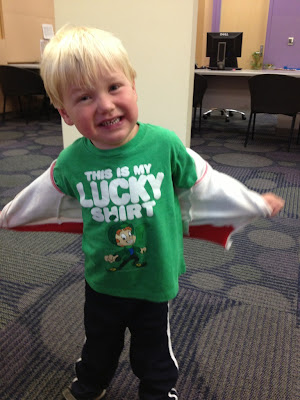 Bodie did FANTASTIC during pre-op, even with the nurse who insisted we needed to check Bodie's sats again, because "that number there" (aka his 02 sat of 82 (heck yeah! We'll take that!)) "should be in the 90's" (and that was AFTER I had already told her his baseline sats were 75-85!). But I digress. He did super, holding out his arm for the blood pressure, easily giving his finger for the sat check, and showing off his uber cuteness to anyone who would pay attention. There were kids crying all over the place, but not Bodie - he was just happy as could be. Well, except for not wanting to wear his awesome hospital gown handmade by our dear friend and heart mama, Natasha. 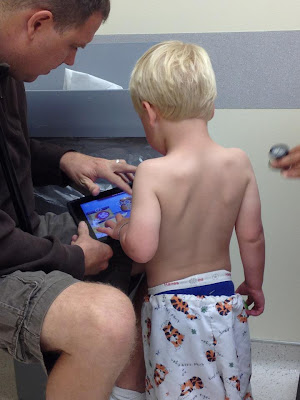 He was NOT keen on the Versed, which apparently tastes really nasty. He took one taste and was having none of it. But I was so proud of him. After just a little talking and agreeing that he could keep his binkie in while he took it, he took it like a champ in one swig. Have I mentioned how proud of this kid I am?

So then, we waited (and played iPad - have I mentioned how helpful that thing is???) for it to kick in. And kick in it did...we have a hilarious video of his antics once the Versed kicked in. He couldn't even keep his head up. "Relaxed" doesn't even cover how he was feeling. But, alas, youtube is taking 1,000 years to "process" it. Lame. We'll post that once Youtube finally gets its act together.

He did GREAT with the handoff - didn't even care (not sure he'd have cared about anything at that point, to be honest). We tucked him in with his Joshie Doll and he was on his way. When we turned to leave, he was playing peek-a-boo with the nurse as she was wheeling him down the hall. Ok, peek-a-boo might be a stretch given his drink stupor. He was putting the blanket over his head and trying to remove it and slurring something along the lines of peek-a-boo. Everyone was cracking up.

Have I mentioned how much we love this kid? 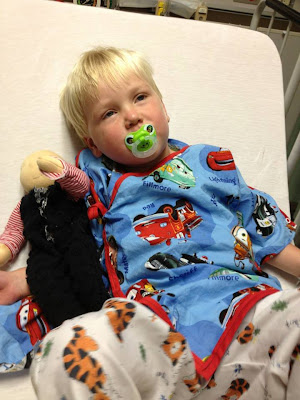 So now we wait. The diagnostic cath will be first and hopefully, we'll have results on that in a few hours. Then they'll do the EP study. We likely won't have any updates before then. It's shaping up to be a long day.

Please keep little man in your prayers - we love him and are so hopeful for good results today!