This week sucked. I mean really, really, really sucked. Dusk hasn't been able to get his pain under control, so hasn't been sleeping. In fact, he's been pacing the house all hours of the night. And by "pacing," I mean shuffling down the hallway with a VERY loud walker, like a little old man. And the loud shuffling is accompanied by moaning. He's been in horrible pain, which is seriously hindering his recovery. And because he's up all night, so am I. It's been SUPER awesome.

As if that wasn't fantastic in and of itself, Sierra came down with a stomach bug on Thursday afternoon (she started with vomiting all over the floor of Walgreen's - again, SUPER awesome. The woman in line in front of me marveled at my mad vomit-catching skills and how prepared I was with both a bag and wipes in my purse. I decided to save her the whole "my son barfed every day for the first 18 months of his life - oh, and has had 3 open-heart surgeries, so nothing scares me" spiel and just thanked her nicely). So the poor kid was up all night Thursday night. Then, Bodie added to the fun by having the start of an ear infection by Friday morning.

Although the whole week pretty much blew, Friday took the cake. Before Sierra got sick, I had planned on dropping both kids off at school and going in to work in the morning and then taking some "me" time in the afternoon to maybe get a massage or something. Ha!!! Dusk had talked to his surgeon Thursday night about his pain levels and, although the pain doc had called in another pain med to the hospital pharmacy (we hadn't picked it up yet), the surgeon wanted him to try a different med. But because it's a narcotic, he can't just call it into a pharmacy. So Friday morning, I dropped Bodie off at school. I had left Sierra home with daddy (thank God Sierra is so independent and resourceful, she was happy to watch a movie so daddy thankfully didn't have to do much, which was good since, you know, he couldn't have anyway). I then got to drive up to Beverly Hills to pick up said prescription.

I tried calling Walgreen's on the way home to see whether they carried the medication, but they couldn't tell me over the phone, since it's store policy. Say what? So, apparently, their policy is that you have to actually drive to the store (super fun in LA), haul your butt into the store, wait in line at the pharmacy window, and then wait another 10 minutes for the pharmacist to look and decide that no, they do not have that drug in stock. Thanks for the help. I made them call 3 other Walgreen's to find someone who carried it. Nobody else had it. I then tried CVS, who at least could tell me over the phone that they didn't have it, but that they could order it and would probably have it by next Wednesday. Fantastic. Dusk will probably be dead from the pain by then.

Then I get the bright idea to call the hospital pharmacy in Santa Monica, thinking they might carry it since it's a controlled substance. Good news is that they had it; bad news was that they wouldn't fill it because the prescription was coming from the surgeon and not the pain doctor and the pain doctor wouldn't be happy about that. I'm sorry but are you kidding me?!? My husband is being denied pain meds because of some doctors who can't manage to get along? It would have been fantastic if the surgeon had mentioned that tiny tidbit on Thursday evening when he spoke to Dusk, so I wouldn't have had to drive all over town only to get the original prescription that had been waiting there for us to pick up already. The long and short of it was that, after several heated discussions, I ultimately picked up the original prescription the pain doc had called in earlier in the week, with an appointment to see the pain doc on Monday.

But wait, it gets better!!! I had hardly been home 10 minutes to check on my girl and give Dusk his new pain med when I get a call from Bodie's school that he's been crying for an hour and a half and they think he might be coming down with something. Of course, because that's how my day was going! I got to Bodie's school to find him running around, grinning from ear to ear. Stinker. I can guarantee with almost 100% certainty that he was faking it so that he could stay home with sissy. That kid is too smart for his own good, I'm telling you. But, because he definitely wasn't himself, home he went as well.

So, by Friday afternoon, I was officially the last man standing. I will never, I mean never, again mention outloud my plans for "me" time and a massage. Ha!

The good news is that after things hit the crescendo of crap Friday afternoon, they got much better after that. The kids took unprecedented almost 3 hour naps, so I was actually able to go into work after all. And Dusk discovered that Tylenol, alternating with his new pain med, actually works to manage his pain pretty decently, so slept last night for the first time all week. And Sierra stopped barfing and seems much better tonight. And Bodie's ear infection seems to have been vanquished after a couple days of ear drops.

And Bodie discovered Sierra's swim cap and is now insisting on wearing it in the bathtub. 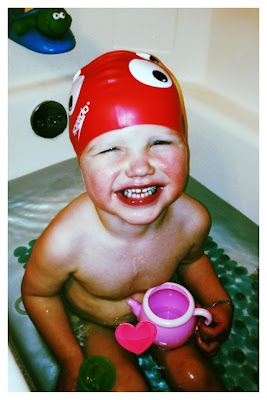 Oh, and Bodie weighed in tonight. 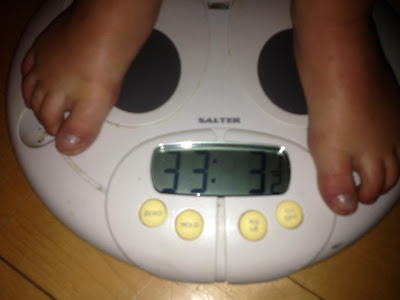 He has now, officially, hit his surgical goal weight of 33 pounds. He has made weight. It is on. I don't know whether to be excited or to vomit. Wait, I do know. Vomit. For sure. But I'd like to be the only one vomiting. If this stomach bug could be gone from our house, that would be awesome. Prayers for that would be very much appreciated. Oh, and for Dusk's recovery. And, apparently, my sanity. :-)