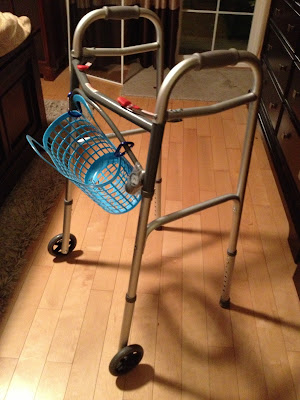 (yes, my very industrious husband really did attach a GIANT blue basket to his old lady walker so that he could cart his stuff around the house. It make everything so much more fun. I tried to take a picture of him with it so you'd get the full effect, but no dice.)

He's moving on to crutches! Yay! It'll be nice to lose the walker - but it did give us some funny moments, for sure. Like, take Monday for instance. We had just left Dusk's doctor's appointment and had to walk around the corner to the pharmacy to pick up meds. As Dusk was shuffling along with this stupid walker, he was angrily talking about how much the situation sucked, how he shouldn't have to be hobbling around in a walker all because some doctor made a mistake, yadda yadda yadda. Me, being the super understanding and compassionate wife that I am told him to quit whining, that things could be so much worse and there was nothing he could do about it now but work on recovery. When he continued to whine, I told him I was going to go on ahead to the pharmacy and was going to leave him there by himself...until I took a few steps and turned around to realize he looked very much like an old crazy man, shuffling along with his walker, muttering obscenities under his breath...which means he fits right in in Santa Monica. No one would think twice. Once we realized that, we totally started cracking up. It was a perfect moment of levity! (as was 10 minutes later, when a homeless man stopped him to ask for directions and have a chat - mostly because, I'm pretty sure, he thought Dusk was one of his peeps. True story.)

Anyway, Dusk continues to trudge on in his recovery, making progress every day. Although he will tell you progress is nowhere near as fast as he'd like, in my Pollyanna world view I will tell you that he is doing MILES better than he was even a week ago. His pain is managed much better, he's getting in some pretty grueling PT sessions, the home health nurse has been discharged, and his mobility is getting better every day. No news yet on when he'll be able to return to work, but his surgeon says he's recovering pretty much as expected. (But then, his surgeon also said how beautiful and fantastic Dusk's very Frankensteinish incision site looks, which, we're pretty sure, was just his way of doing a little CYA - but hey, whatev - there are worse places to have an ugly scar than a place covered by clothes - I mean, it may impact Dusk's ability to wear a thong bikini, but since that pretty much went out with the 1980's, I think we're cool...)

Bodie's also had quite the week, with a 2-day run of tachycardia (that his body was NOT fond of, which had mommy more than a little worried) and a Cardiology appointment where we confirmed that yes, we are indeed heading down the Fontan path and heading there soon. We're looking at his pre-Fontan cath likely next month with surgery in mid July. We'll definitely update when we know more specific details, but in the meantime, we'd really appreciate prayers for that!