After our 6-hour "flat on his back" wait yesterday, CHLA discharged us at 6:30 last night! 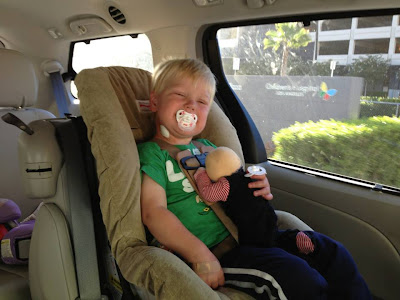 We picked up Sierra, came home, put both kids in bed - and everyone (including Dusk and I) was asleep by 9:30 or so! What a day!

Today, Bodie is doing awesome. We changed his dressings this morning and he's left with only a couple of bandaids (and a little adhesive residue) and some puffiness around his eyes. Other than that, you would honestly never know what he went through yesterday. He's pretty much 100% back to normal. Praise God!! 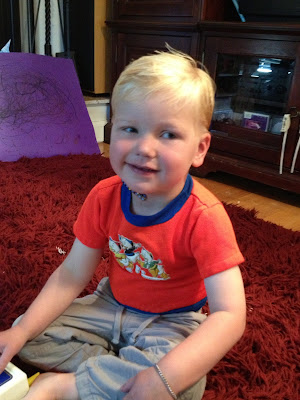 On the whole, yesterday went SO MUCH better than we were anticipating. I wouldn't describe it as "easy-peasy" (I mean, really, handing your child over for a procedure like that could never be described as easy-peasy), but it was so much better than all of the scenarios we had in mind going in.

The waiting wasn't too bad. We knew Bodie was in good hands and that they would update us when they could. The cath part went super fast (they had told us to expect 2-3 hours; they called us 90 minutes later to tell us they were done and to come upstairs!). And the EP part took longer than we were anticipating, but we knew Bodie was in such good hands and we appreciated that they were being extra careful and thorough, so the waiting didn't seem so bad.

The first couple of hours in post-op recovery were tough, with Bodie waking up and thrashing and screaming as he was coming out of the anesthesia. But, really, if I was coming off drugs to find myself with an iv in my hand, painful wrappings on my neck and groin and my legs caught in a vice-like bandage wrapped around them keeping them straight, I'd probably be a bit feisty, too. ;-) I'd say that was all to be expected.

But once we got past that part, Bodie did fantastic. I am so grateful he is as verbal as he is. He was able to tell us exactly what he wanted and we were able to give it to him (water, milk, apple juice) or explain why we couldn't (let him bend his legs, sit up, etc.) and then distract him away from it. Thank God for the iPad (in particular the Mr. Potato Game, which Bodie ended up playing for almost 3 hours straight - go figure). The nurses told us they were pretty impressed with how well Bodie did. That 6 hour stretch was boring for sure, and challenging to keep him entertained, but nowhere near as difficult as I had imagined with such an ornery kid. ;-)

I would say that yesterday gave us great hope for the Fontan. Of course it will be much tougher and much much more nerve wracking, since OHS is a whole different ballgame than just a cath. But yesterday reassured us that (1) Bodie is resilient, (2) his body is strong, (3) hemodynamically, he is ready for the Fontan, and (4) together, Dusk, Bodie and I make a great team and we'll get through it.

And we just have to give a HUGE shout-out to CHLA's Electrophysiology team. We knew Bodie's Electrophysiologist was good, but seeing him in action yesterday just gave us a whole new level of respect for him and their entire EP department. Bodie is crazy complex with his arrhythmias and there are probably only a few doctors in this country who could really figure him out and treat him effectively. And his EP is definitely one of them. Not only is he brilliant, but he is unbelievably good in the cath lab, anticipating every complication and double and triple checking things to create the least risk possible for Bodie. He looked fairly exhausted when he came out; suffice it to say, Bodie gave him a run for his money. It is so easy to take for granted these types of procedures, but really, reflecting back on yesterday, I have to say that I am totally in awe of CHLA's EP department. I feel so so blessed that Bodie happens to be treated at a hospital that has not only a great CT department, but also a top notch EP department.

Thank you SO Much to everyone who was praying for us yesterday! We know that is the only reason things went so smoothly! We continue to be so grateful to God for his ever protective hand over our son.