How did my appointment go? 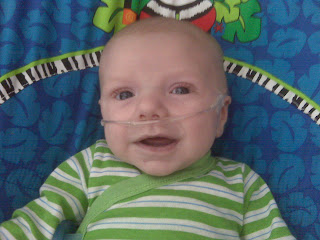 Why, it went great, thanks for asking! 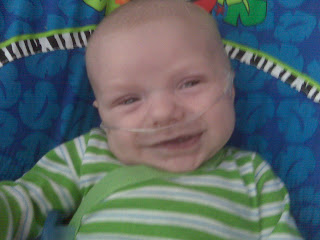 Bodie had his 2 month check-up today with his pediatrician and did great! He weighed in at a whopping 9 pounds even, which means he's gained almost a pound since we brought him home from the hospital 2 weeks ago! YAY!!! He gained a bit in length as well and is now 22 3/4in (so he's in the 8th percentile for weight and 49th percentile for length). We are so proud of how well he's doing, considering how no one knew whether he could actually do well enough on the thickened feeds to actually gain weight (as they explained to us in the hospital, the g-tube was only postponed, not necessarily canceled). So, it's been a huge sigh of relief to see how well he's growing! He also got his shots and did fantastic - cried, but settled down within a few seconds after, of course, getting the bottle in his mouth! LOL...we're watching him very carefully, and have him on Tylenol just in case, but so far, he doesn't seem to have any adverse reactions (just more tired and a bit fussier than usual, which is pretty much how Sierra was as well).
Posted by Amy Bennett at 8:37 PM