On the fast track

What? I'm on the fast track this time around? Are you serious??? 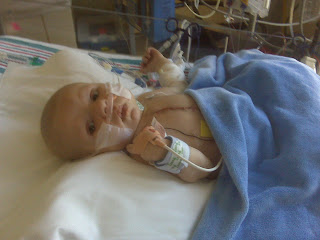 It would appear that Bodie is indeed on the fast track this time around! He had an amazing day today. Today, he was extubated AND lost his remaining chest tubes and his foley catheter! What an answer to prayer!!! Last time, he was on the vent for 10 days - this time, 48 hours! Go Bodie! Right now he's on Vapotherm, which is a high flow nasal canula. The next step is to wean him down to a regular nasal canula - and, once he's on a low enough flow, they can start feeding him. The good news is that they weighed him and he's lost less than we thought in the past weeks - around 3 or 4 ounces.

Prayer requests for tonight and tomorrow:
1. Pray that they can wean him down from the high-flow to the regular nasal canula (and then completely off of it - we are really hopeful that he won't have to come home on oxygen this time!).
2. Pray that they can restart his feeds and he will tolerate them well.
3. Now that he is more stable, they are starting to think about the issue of whether he was micro-aspirating and that maybe that was what caused his downward spiral (they had expected his pulmonary hypertension to start to get better by now - because his has not, either that's just how he is, or something is exacerbating it, like micro-aspirations). If they determine that he is aspirating and that's what's contributing to his pulmonary hypertension, they will likely say that he has to have a g-tube. Because he LOVES to eat (and it's our best mechanism for soothing him when he's upset), I have been pretty adamant that I do NOT want them taking this route unless they are sure that he is indeed aspirating (rather than based on a theory alone). They are hoping to get GI in to look at him and maybe see if they can determine it conclusively - please pray that they find out that he is NOT aspirating -or if he is, it's not enough to warrant a g-tube!

Thanks as always, faithful prayer warriors!
Posted by Amy Bennett at 8:57 PM