What a week we've had! So sorry I haven't had time to post, but life has literally been a whirlwind! Thank goodness my mom is back for a week to help out, so I have a second to update the blog! :-)
We're quickly discovering how unpredictible life with a single ventricle child can be. On Wednesday night, Bodie decided he missed the doctors and nurses at CHLA so much that he would lower his heart rate such that we'd have to end back up in the ER there. Babies have higher resting heart rates than adults, and single ventricle kids like Bodie tend to have higher than average resting heart rates (140 on up). Bodie, by contrast, stumped all the doctors and nurses by having a resting heart rate in the hospital of 100 or so. Near the end of his stay, he would hover in the mid-80's when he was in a deep sleep, each new nurse would freak out, and then realize that was his norm and leave him alone. Well, on Wednesday night, his heart rate was hanging out in the low-70's (even dipping into the 60's), so after much debate, we decided to call the on-call doc from the CT surgery department. After lecturing me for having an at-home monitor (yes, of course, THAT'S the time to have that discussion), she told me to bring him into the ER just to have him checked out. We took him in, and SPENT ALL NIGHT IN THE ER (no exaggeration - we got there at 11:30 and were not discharged until 7:30 the next morning!). One of the worst nights ever! Good news is that cardiac-wise, all looks good! Looks like he just hangs out low when he's in a really deep sleep (maybe he just couldn't sleep quite as well in the hospital as he can at home). Not so good news is that, in doing a work-up on Bodie, they discovered what they think may be an abdominal mass (they're not sure - it may just be his kidney, but they want an ultrasound to make sure - we're hoping to have that done early this week).
He also had his first appointment with Dr. Kim, our awesome cardiologist! (Well, his first appointment postnatally, as I saw lots of her during the pregnancy.) He did great! His echo looked good - good heart function, shunt still looks good, etc. His sats were good as well. What a relief to have such a good appointment! Bodie had gained weight as well - he's now up to 8lb6.5oz, and 22in, so he's growing well (9.5oz and 1.5in since birth). YAY!!!
In other fun news, we took our first family trip to the park (figured we could keep Bodie covered, so no one would breathe on him and spread germs, but still could let Sierra have fun). Here are some pics:
Proud big sissie: 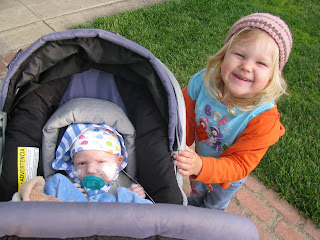 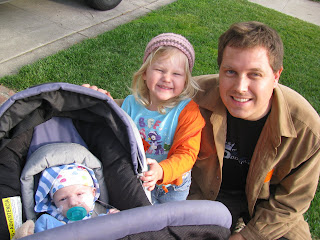 Big sissie on the slide: 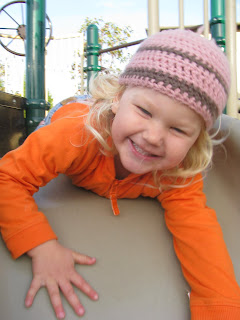 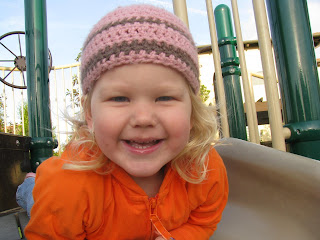 Bodie watching the action from the sidelines: 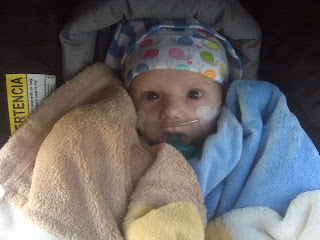 Prayer requests for today:
1. Please pray for both Sierra and Bodie. Sierra has caught a nasty bug of some sort and has been running a fever, had diarhea and threw up last night. Please pray that it passes quickly and pray that Bodie doesn't catch it! Fluid and electrolyte balances are really precarious for single-ventricle kids as it is, and even a simple cold or flu can be enough to reduce heart function in these kids. Please, please pray that Bodie doesn't catch it!
2. Please continue to pray for Bodie's buddy Isaac. They are increasing his oral feeds, but he's having some difficulty keeping them down. Please pray his feedings improve and that his lungs improve as well! More than anything, pray that he and his mama get out of the hospital really really soon! Here are a couple of pics we took of our "forever friends" Isaac and his awesome mama Cindy (taken the night of Bodie's discharge - both boys just happened to have the same shirt): 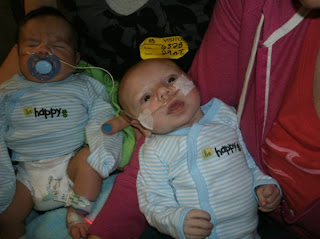 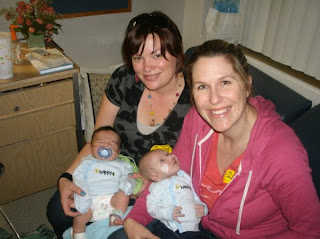