Circle that date in red 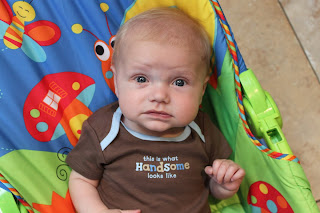 They're going to do WHAT to me??? And you're happy about this WHY?

Well, we have a surgery date...(drumroll please)...SEPTEMBER 30. I know, I know, more than a month away. (sigh). His surgeon was actually shooting for mid September, but his schedule was full, so our choices were really next Thursday or September 30. He felt that Bodie really truly is doing SO well right now that he didn't want to rush him to surgery if he didn't have to. His shunt is big enough that his sats should hold just fine until then, so it buys us some time. And Bodie has really been thriving at home, so he'd like to let him do that for a little longer before doing surgery. His thought is that Bodie had SUCH a rough go of it, his little body is really over the hump now and he's finally in a good growing stage right now, so he'd like to leave him there a little longer.

So there you have it. 5 weeks to worry, obsess and think of little else. Or, 5 weeks to pray, hope, rest in God's promises to get us through this and love on our little guy as much as possible. Um, I think we'll take the latter. :-)

Our appointment in general went great today. Everyone who saw Bodie was totally amazed at how well he's done at home, what a great eater he is, how big his cheeks are, how much more hair he has, etc. The nurses were absolutely thrilled that he had gained an average of 28 grams a day since he's been home. Um, hello people - you told me to shoot for him gaining 30 grams a day, so come hell or high water, the kid is going to gain close to that. I didn't know there was an option to not get close to that. What can I say? Thanks to my dad being in the military, I have an unhealthy fear of authority and do what I'm told. ;-)

And Bodie was happy to be there - smiling at just about everyone, which is always fun. He has such an adorable personality. It makes my heart smile everytime a stranger stops to tell me how cute he is (doesn't exactly make my heart smile if they try to touch him, but compliments I'll take any day)!

I'll provide more info about donating blood and/or platelets once we get closer, but for now, please just put September 30 on your calendar and spend some time (or a lot, if you have it!) in prayer for our little guy between now and then. Thanks!
Posted by Amy Bennett at 8:47 PM