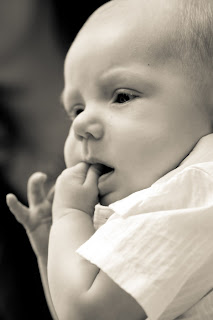 Man oh man has the teething monster hit our house!!! Sierra was so kind to us and gently broke us in, one tooth at a time, a month or so between each one. Bodie? Not so much. If there's a hard way to do things, he wants to do it that way, as you all know. ;-) 2 teeth broke through within a week of coming home from the hospital. And the next 2 are super close behind (I'm guessing they'll be here by the end of the week). He is MISERABLE. Fighting the bottle, fighting sleep, fighting being put down - and screaming at anyone who looks at him the wrong way. (Oh and have I mentioned the loose stools and constant gagging on all the excessive saliva?) Ok, so maybe I'm exaggerating a bit, but suffice it to say, Bodie is not a happy camper. For a kid who has been through so much worse, it's actually kind of funny that he's soooooo persnickity about teething. Honestly, sometimes, he gets so angry at me and I just have to laugh at how overly dramatic he's getting about it all. (Which, oddly enough, makes him stop screaming momentarily at least. lol) The good news is that even though I'm having to push him to eat, he's getting his calories in. He hasn't really gained weight over the last few days, but at least he hasn't lost any. And he's satting wonderfully (back up to the mid-80's, for anyone who's interested).

He had an appointment with his pediatrician last week, who was really happy that he's still on his growth curve considering everything he's been through the past 2 months. Length wise, he's doing great - weight wise, we're getting there. He has also had 2 appointments with his cardiologist since coming home from the hospital. He's warming up to her, giving her lots of smiles. She's also happy with his growth and that he's staying stable. She is awesome - she's working on making his med schedule more "user-friendly" for me. Right now, he takes Reglan at 5am, Aspirin (in tablet form that we mix with his Enalapril), Enalapril, Lasix, Proponalol (in tablet form that we mix with his Lasix) and Digoxin at 9am, Reglan at 1pm and then Enapril, Lasix w/Propanalol, Digoxin and Reglan at 9pm. She's working on reducing meds so that eventually we aren't giving him quite so many meds. As long as it works for him, it makes me happy! She's also putting in our referral for his pre-Glenn surgical consult. It will be up to Bodie when he has his Glenn, but her guess is maybe late August/early September.

So, today, please pray for him to get past this teething stage so that he gets back to his usual sweet smiley self soon! (And mommy and daddy can worry a bit less!).
Posted by Amy Bennett at 2:16 PM