Made it through another weekend at home (but just barely)

Weekends are the hardest for me in terms of not completely freaking out and thinking we have to rush Bodie back to the ER. I'm sure it's because both times Bodie has been readmitted to the hospital, it's happened on the weekend - so I just get in a state of panic when Friday approaches and am on high alert all weekend long. Not an ideal way to live, but well, it's our new normal. I'm working on calming down more, but it will take time.

So this weekend, Bodie decided to add to my anxiety by actually getting himself worked up enough to warrant a trip to the ER. After a nice few days of reprieve from the teething, it has returned with a VENGEANCE. This morning was particularly rough, with Bodie pulling off the bottle and screaming as loud as he possibly could and grabbing his mouth after about 5cc's at a time of each feed. I was lucky to get in an entire ounce before he would just refuse it. He was in tears, I was in tears, Dusk was hiding from the both of us, Sierra was, actually I don't know where she was since I was too busy shoving the bottle into Bodie's mouth to pay attention to anything else - you get the picture. :-) If Bodie was a normal (heart healthy) kid, other than being really frustrating, it wouldn't be that big a deal - you'd just work through it as best you could until his appetite returned. But you can't do that with a single ventricle kid - they just don't have the reserves to deal with deydration or electrolyte imbalances caused by not feeding. So, if they're missing feedings, you have to intervene on some level. All I could think was that we were going to have to take him back to the hospital and they would of course admit him based on his history. And we'd be stuck back in the hospital for teething? Are you kidding me??? Now you see why I was crying right alongside Bodie. (I'm sure it was comical on some level to hear me threatening him saying "Bodie, I get that you're in pain. But you have to suck it up and eat anyway, because if you don't, we're going back to the hospital and what they'll do will be much more painful!!!" but it sure didn't seem comical to me at the time.)

After an extremely frustrating morning, alternating between Motrin and Tylenol (along with teething tablets) all day and adding in a few naps, we finally got things under control and he was feeding fine by the end of the day. We ended up getting his feeding goal in for the day (praise God for that one - I'm still not sure how it happened - oh wait, I do know - it was from me sitting on the couch with him for the better part of the day, shoving the bottle in his mouth against his will at every available opportunity...but I digress (such is the life of a heart mom)).

I'm not sure what tomorrow will bring - hopefully a reprieve again from the teething. If it doesn't, I'm going to call his cardiologist and see if we can give him some Tylenol with Codeine (we have some left over from his second surgery). Hoping she gives us the ok to do so if necessary. I don't want any more mornings like this one.

So, yes, we made it through another weekend at home...but just barely!

Oh, and just to assure you that the entire weekend wasn't spent in tears and panic, here's a few pics of Bodie enjoying Tigger along with Sierra (Tigger has been Sierra's lovey from the time she was about 8 months old and we bought a second one the exact same as the first so that we'd have it in case she ever lost the first. Of course, she wanted nothing to do with the second one - now Bodie has taken quite an interest in it. Go figure.). Sorry for the grainy quality of the pics lately - I dropped my camera and just bought a new one, but don't have it yet. So, cell phone will have to do for the time being! 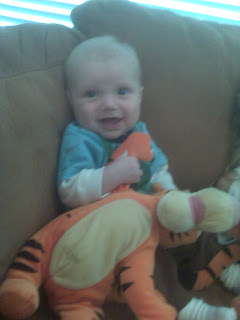 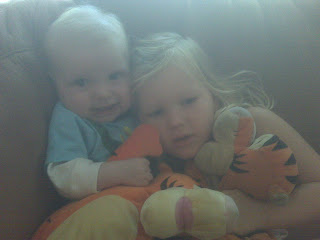