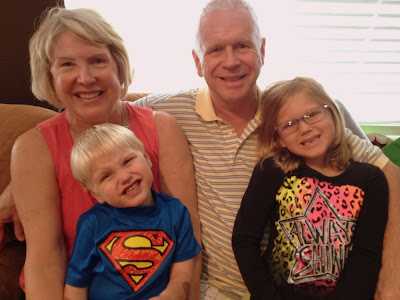 There's a song by Sara Evans called "A Little Bit Stronger." It's a break-up song about moving on from someone, so, you know, totally not applicable to our current situation. But, everytime I've looked at Bodie the last couple of days, the refrain has run through my head - 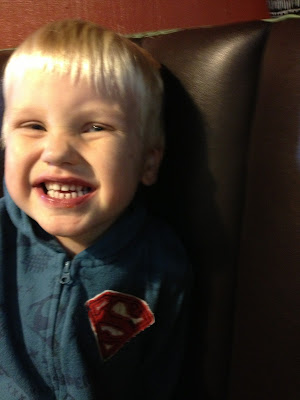 I swear, each day, Bodie gets a little bit stronger than the day before. He's still more winded than we'd like him to be (I think we sort of secretly hoped he'd come out of the OR no longer winded), but it's probably to be expected at this stage in recovery. We expect the windedness to get better and better as he adjusts to his new physiology. His sats continue to stay in the low 80's during the day and mid to high 80's while he sleeps at night. Which is totally fine for right now. And he's PINK. So.stinking.PINK. This picture was taken at breakfast this morning - it was cold out and he said he was freezing. That would have been a recipe for some mighty purple lips a couple of weeks ago. But not today - I'm loving the pink lips!

He's eating like crazy, following me around all day saying "I'm hungry" and "I'm starving." As Dusk pointed out this morning, I'm not sure we ever heard either of those phrases come from Bodie prior to the Fontan! Yesterday morning, he had mac n' cheese for breakfast - and this morning, he had 2 bowls of shredded cheese before breakfast. And this is a kid who never ate breakfast before without a WHOLE LOT of prodding and begging. It's not unheard of for kids to eat better post-Fontan - I just didn't expect his appetite to increase THIS much. It's amazing. I'm hopeful it will keep up!

It's a bit of a struggle to get him to drink though. Prior to the Fontan, he ate, but just enough to get by, and pretty much got most of his sustenance from whole milk mixed with chocolate pediasure. Now, he won't touch milk with a 10 foot pole - that we did not expect. Pretty much all he wants to drink these days is water. It's a bit of a concern for us, because he's on such heavy diuretics there's a real risk of dehydration if he doesn't get a lot of fluid in. He's probably drinking about 25oz of water a day, which is ok - but it'd be better if he was closer to 30oz.

Other than that, things are going well. Bodie is adjusting to being back home and is getting more comfortable with his scars. THANK YOU for all of your prayers for that! In fact, when my parents came to town yesterday, the second he saw them, he pulled up his shirt and start pointing to his scars and excitedly talking about them! I was floored. And then later yesterday, we had good friends over and Bodie stripped all the way down and ran around in a pull-up, not even caring about his scars. Praise God - clearly the prayers are helping!

Speaking of my parents, the kids had a ball with them yesterday. They dropped off some ah-mazing gift baskets from the football coaches' wives at Cal Poly - can you believe these?!? They're as big as the kids! 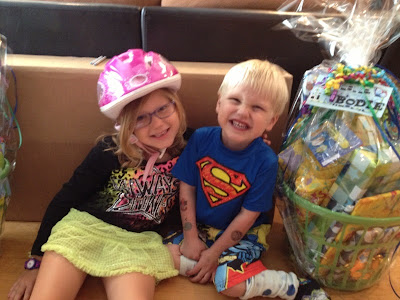 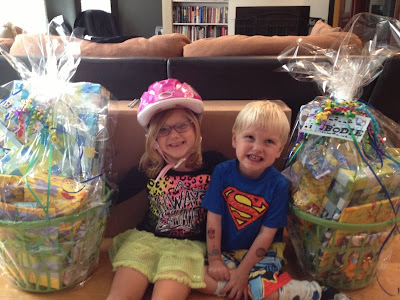 Tomorrow we have our CT post-op appointment and x-ray. I'd be lying if I said I wasn't concerned about the risk of readmission. I plan to have our bags packed and in the car, just in case. He's not showing signs of fluid re-accumulating (his sats are decent, his energy levels are ok, he's not puffy or showing signs of retaining fluid, he's drinking ok and eating great), but sometimes fluid can be accumulating with no outward signs. So we definitely need prayer for tomorrow's appointment to go off without a hitch, for his chest x-ray to be clear and for us to be released to Dr. Kim for follow-up care.