Fontan Post Op Day 1: You win some, you lose some

Today was a very long day and I'm pretty darn exhausted, to put it mildly. I'm only just now getting a chance to update.

Bodie started the day on a high note, with lots of plans for the day. But then they tried to get ahead of his pain and restlessness by increasing his Morphine...and he was totally snowed for most of the day. BUMMER. He spent a good part of the day passed out in my arms or in bed with me lying next to him. 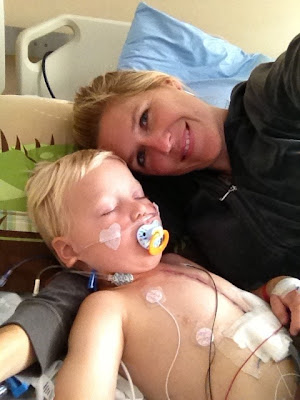 But he got some sleep in, which his little body clearly needed. And I got to cuddle him and snooze a bit, which I needed, so it was all good.

As for the details, here they are:

1.
LOSE: We didn't get him up and walking, but
WIN: He sat up several times on his own and sat in my lap for quite awhile. And told us he wanted to walk. And tried to climb out of the bed to start walking. And his chest tube drainage was very very minimal. And we had a surprise visit from fellow heart mama Sherry, who brought an awesome set of drums for Bodie. And he tried to play them, he really did - but he was so drugged that he fell asleep mid-drumming. It was totally adorable. 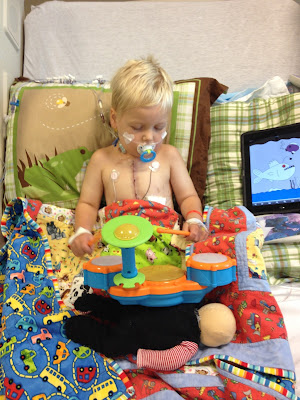 Pray that we lose his Arterial line tomorrow morning and can get him up and walking. And pray that we can get his pain under control without completely knocking him out.

2.
LOSE: His sats were pretty variable all day, starting in the 90's and drifting down to the 70's by the mid-afternoon. They had to go back up on his 02 to 4 Liters and even that only helped marginally. High 70's and low 80's for a post-Fontan kid on 4 Liters is NOT good.
WIN: His hematacrit was a little on the low side, so they decided to help him out with a transfusion. I cannot believe the difference in his color from before to after transfusion. His cheeks are SO rosy now! He is back to satting in the low 90's and has been weaned down to 1.5 Liters of 02. Clearly it was exactly what he needed! He also got a breathing treatment of Albuterol and that seemed to help as well.
Pray that he is able to maintain his sats as they wean his 02 down.

3.
LOSE FOR THE WIN: Lost the Epi, a chest tube (only one left and it's draining very minimally!) and the foley (the kid is now peeing like a champ!); and should be completely off Milrinone by the morning!

4.
LOSE: Vomited. Twice. Also, after his marathon water and popcicle session earlier, he didn't drink or eat much but watermelon this morning and that came up late in the day.
WIN: I got nothing. Except that they're starting Zofran now.
Pray that the Zofran settles his tummy so that his appetite returns and he wants to eat and drink more tomorrow.

5.
LOSE: Ugh. The rhythm stuff. We are 100% certain we'll be going in for the pacemaker replacement next week, and that it will be open-chest. Also, when they pulled his chest tube today, the external pacer stopped working for some reason (the atrial pacing wires may have been inadvertently moved around when the tube was pulled), and his underlying rate was shown to be in the 50's and junctional. Neither things are good. The pacing issue was taken care of by changing the external pacemaker setting, but, if he keeps it up, the junctional rate could be an issue and could buy him 100% dependence on the pacemaker, instead of just when he sleeps at night.
WIN: We're on the schedule for 7am Monday morning (yay! We'll be past it that much sooner!).
Pray that the junctional rhythm was just his body's response to the chest tube being pulled and that it will resolve on its own. Please also pray that the pacer continues to appropriately pace him until Monday morning and that surgery is quick and successful without complications.

6.
WIN: We got to see our favorite attending on the planet, Dr. Moromisato, who stopped by to see Bodie and say hi. 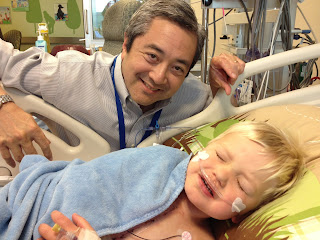 LOSE: Today is his last day before he leaves CHLA to be Chief Medical Officer at Cardon Children’s Medical Center in Phoenix. Boo for us. Yay for Phoenix.

7.
BIGGEST WIN:
Have I mentioned that his color is FANTASTIC? 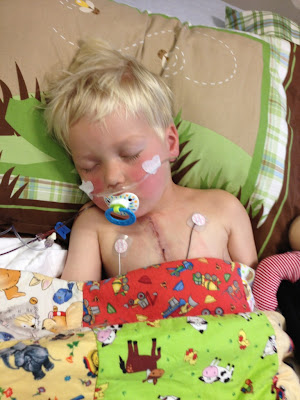 Please keep the prayers coming - he is still really recovering quite fantastically. He's just dealing with a lot of typical post-Fontan stuff.
Please pray that he gets a great night's rest and is up and ready to tackle Fontan recovery tomorrow morning!