After a nice, restful night of sleep... 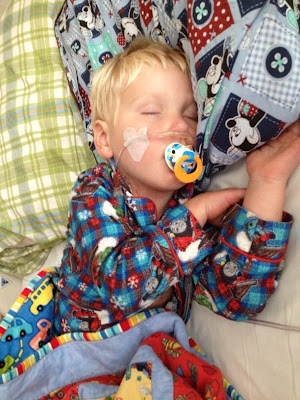 (I seriously cannot believe how peacefully this kid can sleep considering everything he's had done to him in the past week!)

We moved to stepdown!!! YAY - one step closer to going home! 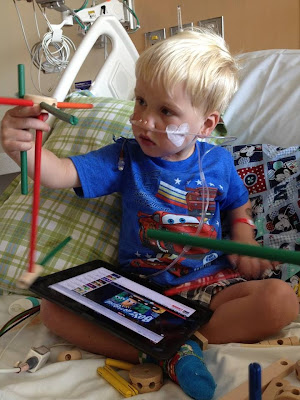 (Upon his admission to the step-down unit - way more space to play with daddy!)

Lots of wonderful stuff happened with the move. Most notably, Bodie lost his remaining chest tube and oxygen, and gained a whole lot more freedom. He has now walked the halls in CV Acute multiple times and played in the cardiac playroom twice. He LOVES it! He is getting much more comfortable on his feet again and can walk without any help now, which is fantastic progress! 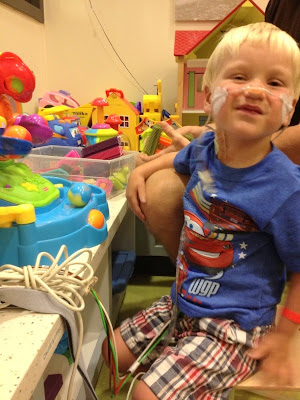 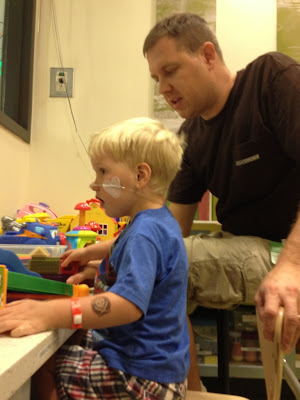 He got to eat somewhere besides in his bed - so excited to be untethered! 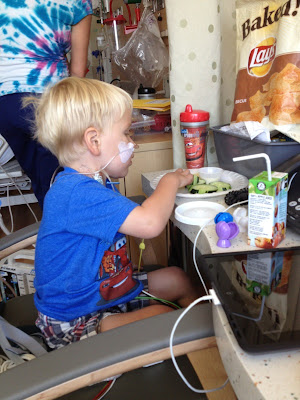 He had a chest x-ray in anticipation of his chest tube removal. This is what he did when we told him the tech was taking his picture. What a cheezer! 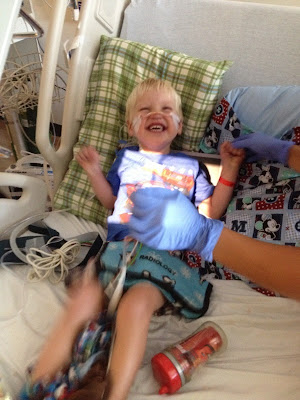 We also had our beloved Karin come and visit and Bodie was beyond thrilled. 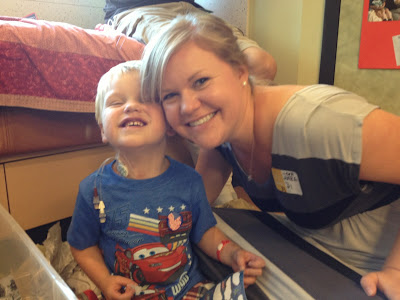 Karin helped Bodie open up a lot of his treasure box items and he had a blast. 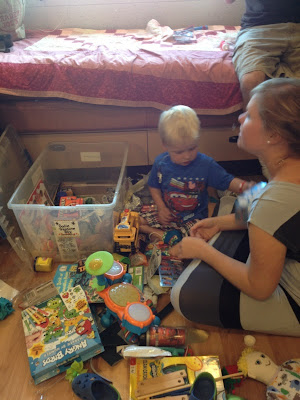 Karin also helped the nurses and me during Bodie's chest tube removal, which turned out to be a 4 person job - 1 to pull it, 1 to hold his legs down and the other 2 to calm him and deal with his arms. Exhausting stuff - thank you so much, Karin, for loving our little man enough to come over here and hang with all of us, even during the tough stuff! We love you!

After comfortably sitting in the 80's all day, in the late afternoon, Bodie's sats dropped to the 60s and stayed there. He was happily playing, but the pulse ox machine was alarming left and right. We had a steady stream of nurses in our room, checking Bodie out. It was all very reminiscent of when he was a newborn and satting all over the place, bouncing back and forth between CTICU and step-down. Not a memory I wanted to relive. To be honest, it was deflating and kind of scary to be back in "unexplained low sats" land. Needless to say, his nurses weren't too happy. It didn't take long for them to want him back on 02.

That couldn't possibly have felt like a bigger step backwards. We had JUST taken Bodie off of it and he hadn't been using it for the last 24 hours or so (although he technically was "on" 02, the canula had been resting on the bridge of his nose, effectively oxygenating his eyeballs and that was about it - you can see in the above pictures). I cried. A lot. Bodie cried. A lot. I tried to go in the bathroom and cry in there so that Bodie wouldn't see - but I couldn't help it. When I came out and he cried "but, mommy! You said I didn't have to have this anymore!" my tears started flowing again. Not my proudest moment. But an honest one. This has been a long and scary journey - and a tough week. All I could think was "we were so close to going home! Please don't make us go home on 02!!!"

We were afraid it might be fluid re-accumulating, so he had a bedside chest x-ray. But that came back great, thankfully! So it seems our most likely culprit is his good old fashioned pulmonary hypertension, an attack likely brought on by the trauma of his chest tube removal (he was fighting MAD over that and screamed like crazy). Bodie had quite a number of pulmonary hypertension attacks post Glenn as well, so I should have been expecting this. His lungs just DON'T like to be messed with, and changing blood flow during open-heart surgery definitely qualifies as messing with them. Luckily, we had already restarted him on Sildenafil, which is the best treatment for PH attacks in Bodie. We are so hoping that the Sildenafil, combined with the 02, would bring his sats up. And they did - he's currently satting 88 on 1L of 02.

After that late afternoon fiasco, Dusk and I were just D.O.N.E. Totally and completely emotionally drained. (For the record, the removal of the chest tube was the 3rd big procedure I'd had to hold Bodie down for in the past 3 days - it's a wonder this kid will even still look at me at this point.) So I put out an SOS on Facebook to see if someone could take care of bringing dinner to us. We just couldn't even think about it. Thank God our good buddy Dave answered the call and brought us the most amazing dinner, and stayed to play Mr. Potato Head with us for a bit - Dave, you were such an answer to prayer tonight. THANK YOU 100 times over!!! 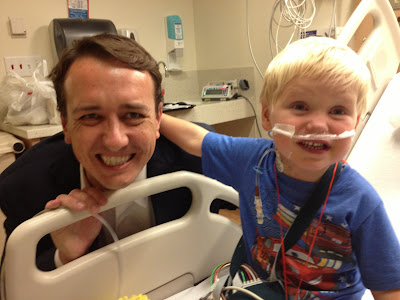 Next up for tonight is to remove Bodie's IJ line (his only remaining cardiac line, in his neck) and replace it with a peripheral iv. It won't be fun -we're hoping a dose of Morphine beforehand will help to keep him calm and not trigger yet another pulmonary hypertension attack.

Beyond that, I'm not sure of our game plan.  Prior to his PH attack, I'd have said given that all of Bodie's meds are now oral and he's pooping (yay for poop!), eating and drinking fine, if we can get a clean x-ray in 24 hours, we'll be ready to spring this hospital. But, that has likely changed due to his PH attack. I don't know how much that changes the picture, to be honest. That's really up to Bodie's lungs.