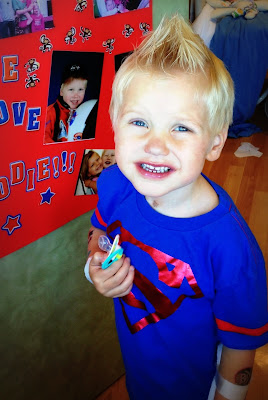 Big picture: Bodie is HOME. 2 major heart surgeries, 3 different chest tubes placed and removed, 2 cardiac lines, 3 peripheral iv's and countless meds, echos and x-rays later, he is HOME at 8 days post-op, snuggling next to me on the couch, post bath and content. This is huge and we are beyond grateful. PRAISE.THE.LORD.

I don't want to take away from how fantastic that is (which is why this post is separate from the discharge post), but we definitely have a couple of prayer requests specifically related to Bodie's discharge.

1. Fluid.
Bodie's x-ray this morning looked a little hazy. (Yesterday's and the day before looked "fantastic.") Not to the point of an effusion, but could possibly be signaling that one is developing. The Nurse Practitioner said she wasn't quite as excited about today's x-ray as yesterday's, but that she was comfortable increasing his diuretics and sending us home to come back for post-op and an x-ray on Monday.  CHLA routinely sends Fontans home on a combination of Lasix, Aldactone and Diuril. Bodie's Duiril dose was "systemic," which I took to mean it wasn't a very big dose, just enough to make a little impact. So it was doubled to make a much bigger impact.

Effusions and fluid build up in the chest are not at all unexpected post-Fontan. In fact, I'm pretty sure it's the most common complication from the Fontan. It just takes a while for the body to get used to the new Fontan circulation. We know many a post-Fontanner to have been discharged from the hospital only to have to be readmitted a few days to a week later due to fluid buildup. Typically, when readmitted, the hospital will hit them with heavy doses of IV dieuretics. That usually works, but when it doesn't, they have to resort to inserting a new chest tube. Not fun stuff by any means. During rounds this morning, the NP said she was totally comfortable discharging us, BUT that, if the fluid has gotten worse by Monday, we should expect to be readmitted. :-( Like I said, it's not a surprise - I think every parent discharging from the Fontan is looking over his or her shoulder, just waiting for the readmission due to fluid build-up. Nontheless, Bodie had been doing so well that we weren't really expecting this 8 days out. The good news is that his body responds really well to diuretics, so we have every reason to believe the increased Diuril will be just what he needs to get rid of that extra fluid.

Please pray that the increased dieuretics get rid of Bodie's extra fluid accumulating in his lungs, and that Monday's x-ray will show an IMPROVEMENT. Please pray we do not have to be readmitted.

2. Bodie's self image.
When I removed Bodie's leads before we were discharged today, he hardly flinched. But then, he looked down and dissolved into tears into my arms. Gut wrenching sobs. When I could finally get him to calm down enough to tell me what was wrong, he said "Mama! My chest looks yucky!!!" (I am 99% sure he thought everything on his chest would go away when the leads came off.)

He's right. It looks gnarly. And that's being nice. His incision looks pretty good, considering. But his pacemaker site was just stitched up (I'm not sure why they don't use the Derma bond to make it look pretty like the central incision - I'm sure they have some rationale) and looks pretty Frankenstein-ish. And the chest tubes? Any heart mama can tell you they're easily the worst scars of the bunch. He has 3 nasty scars from that, including a bruise around the chest tube that was in the longest. And his neck is beat up from the IJ line. And there's a rash all around, well, everything. It's just not a pretty sight. So he's right. It IS yucky. But it's heartbreaking to hear him verbalize that.

He was so upset about it that he didn't want to take a bath when we got home. I coaxed him into the bath by saying we could do it glow in the dark and he didn't need to look at his chest if he didn't want to. That worked. But he still cried when I cleaned his chest and kept splashing water on it to try and get everything off. It totally broke my heart.

I honestly wasn't prepared for this - I've heard of other kids responding this way, but Bodie has always been so proud of his scars.  This is new territory for us. I have told him that I'm not afraid of his chest, that each scar reminds me of everything he's been through, how brave he is and how God has protected him each step of the way. And that every day his chest will heal a little bit more and someday, it will look as awesome as it did a week ago. I can't wait until he believes me.

Please pray for Bodie's tender spirit to heal, to be ok with the assault on his little body in the past 8 days. Pray for increased confidence and awareness that his scars are just tangible evidence of God's protections over him.