Pink fingers - for the first time in his life, his fingernails match mine!!! 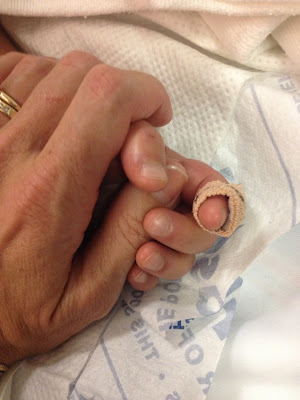 The nurse today said that, were it not for the pacemaker issue, she'd be giving us high fives all the way around. Bodie is really rocking his Fontan. He is nice and pink and satting in the 90's consistently. His pressures are great and his function looks fantastic. His chest tube drainage is fairly minimal for now. He's still on the ventilator, on pressure support, and extubation is definitely on the horizon. We are officially post-Fontan (PRAISE GOD!!!) and Bodie's body seems to be liking it so far! So much to be grateful for tonight.

But we definitely have some serious prayer requests:

1. Pacemaker
When they went to remove Bodie's pacemaker leads to replace them, the surgeon found a small pus pocket on the ventricular lead. He wasn't comfortable putting a new lead on an area of potential infection, so opted instead to culture the pus, start Bodie on heavy duty antibiotics (Vancomyacin) and not to put in new leads at this time. Although the general consensus seems to be that it's not likely to be an infection, you don't want to mess around with possible infections anywhere you have a foreign substance (i.e. a pacemaker) in the body.

What this means is that (1) Bodie does not currently have a working pacemaker. He does, however, still have the temporary leads placed during surgery, so we do have a way to pace him externally. And more importantly (2) we will be going back into the OR next week for them to replace the pacemaker and leads. Because of Bodie's single ventricle physiology, pacemaker lead replacements have to be done open chested. S.U.C.K.Y. This means that Bodie's sweet little chest will be cracked open again next week. They don't expect it to make his recovery too much longer (maybe a couple of extra days), but we're pretty bummed, to put it mildly. I may have lost it a little bit and cried all over the nurse when she told me.

Please pray that the cultures show NO infection, that they can quickly get Bodie on the pacemaker schedule and that the pacemaker replacement goes off without a hitch.

2. Ventilator
They attempted to extubate Bodie in the OR, but he was still a little too sleepy from the meds, so they opted instead to send him back to the CTICU intubated, with the plan to slowly extubate him there. Bodie is not a fan of the vent (I hear ya on that one, buddy). As he's been waking up more, he's been crying for water and milk. It totally breaks my heart to see him like that.

Please pray we can successfully and safely extubate Bodie tonight.

3. IV Infiltration
One of Bodie's peripheral iv's, in his foot, the one they're running Vanco through, infiltrated. This means that, instead of the med going into Bodie's veins, it's going into the surrounding tissues. It can be very scary and cause permanent damage to the tissues. I think we caught it quickly, thankfully - but it's still scary. They're following a protocol of icing and elevating the affected area, and have injected it with a substance that will bind with the chemical to help remove it. So far, it seems to be working and his leg looks much better. So thankful we caught it quickly.

Please pray that the infiltration does not have any lasting effects on his leg tissues.

Lastly, just please keep praying that Bodie's recovery goes smoothly from here on out! Thank you!