Another great day for Bodie!

Bodie had another great day today! (I actually don't have much to report, but I know people get worried if I don't post an update, so wanted to make sure to post something!) He got "de-accessorized" as one doctor put it - they took out most of his lines, so all he has left is his pic line (he has to have one iv line in order to distribute meds and what not)! And he's down to 0.5L on his oxygen and will hopefully be completely off of it soon! The nurse today actually took him off of it a couple of times today, but his sats dropped, so she put him back on. He really has done amazingly well coming off the vent - with all the problems we had last week, we are still shocked at how well his extubation went and that they are even talking about taking him off oxygen already! Praise God!!! He's also been moved from a warmer to a "big boy bed" (basically, a crib - but it just looks less medical than his warmer, so I'm excited). It's a bit bigger, so we can bring in more blankets, etc. to dress it up. And, he's up to full feeds of breast milk already!!! He's now taking 15cc's an hour (about 1/2oz.) through his ng tube and hasn't had any adverse reactions. The next step will be to consolidate the feeds and give him 45cc's every 3 hours. If he can tolerate the larger, less-frequent feedings ok, then we can start working on bottle-feeding!

He's still having frequent episodes of SVT. The general consensus now is that they're not anything to freak out about since he seems to tolerate them well, but they do want to get them under control before we leave the hospital as they're not a good thing long-term for a single-ventricle kid. It's a relief to know we won't have to worry about the episodes forever.

Today, please thank God for bringing Bodie this far already and pray for his feeds to continue to go well and for the doctors to figure out his SVTs and how best to treat them.

And finally, here's another pic of our little man in his new favorite sleeping position - the froggie... 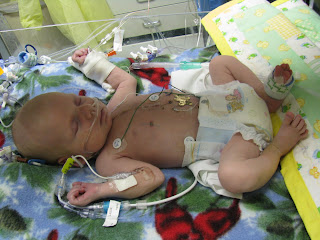