Bodie had a BIG day today! He was weaned off his oxygen at about 2:30am and has been on room air since and his sats have really held their own the whole time! Clearly all of your prayers did good work! Getting off oxygen is a huge step for heart kiddos after the Norwood surgery, so we were thrilled to see such progress! Then, the doctors and nurses decided he wasn't critical enough to be in the CTICU any longer - so they kicked him out to the 6th Floor West, the step-down floor! This is where we'll work on feeding issues and get Bodie ready to head home (and us ready to take care of him)! Then, his former roommate, Isaac, made his move to the 6th Floor West later in the afternoon - and they are once again roommates! We were so excited to see Isaac's wonderful mommy Cindy (and his daddy Jeff) again!

In the afternoon, an OT came to work with Bodie and assess his sucking, swallowing, etc. reflex. The good news is that his suck and swallow reflexes are great - he took to the bottle well (they actually let me put him to the breast, but he wasn't quite sure what to do - looks like that will take a little more time, but it really meant a lot to me that they let me even try! It was a wonderful moment for mama). But, based on his weak cry and the fact that he gagged after taking from the bottle, they're guessing he has some element of vocal chord paralysis and put in a request for an ENT evaluation to make sure. The way the OT explained it to us, it's all related - apparently, we all have 2 pipes (a tracheal, which we breathe out of, and an esphogeal, where food goes) and our vocal chords fold over to prevent food and liquids from going down the trachea. If there's some vocal chord paralysis or damage, food or liquids can go down the trachea, causing aspiration into the lungs (this is a huge concern for hypoplasts since their hearts and lungs are working so hard anyway, they really can't afford to have anything extra aspirating into their lungs). The good news is that Bodie did gag, so he has some sensitivity there (it's not complete paralysis) - but the question remains as to whether it's just weakness due to how little he is and how long he was intubated - or whether it's something more. We probably won't know for a while - the ENT consult won't likely take place until Monday. In the meantime, if you could please pray specifically that God would lay his healing hands upon Bodie's little vocal chords and have him make a complete recovery, we would really appreciate it!

Thank you so much for your continued prayers!!! I know Bodie would not be doing as well as he is without your continued support and prayers.
Oh, and here's a picture of Bodie, smiling, thinking of all of his wonderful friends and family thinking about and praying for him tonight: 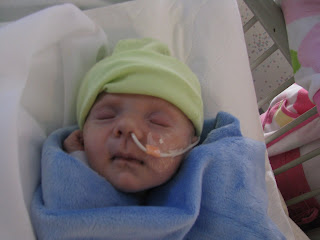