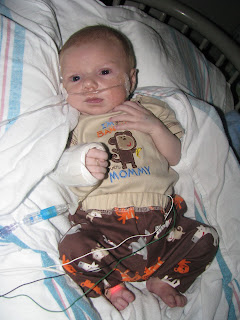 I'm not sure I should even dare to write this and tempt fate, but...word is, discharge is in our not-so-distant future! The surgeon decided that, because he is eating so well, a g-tube is definitely not needed for now!!! YAY! In light of, that, they're starting to talk about sending us home. PRAISE GOD!!!

We still have a few hurdles to cross before discharge happens and would appreciate your prayers to help this happen:
1. The insurance company has to approve the Sedenifil prescription (it's a drug to treat pulmonary hypertension, but because it's also known as viagra, the insurance company tends to challenge it a bit LOL).
2. They need to get home oxygen set up for us.
3. Bodie's cardiologist (Dr. Kim, the one I saw my entire pregnancy) needs to be brought into the picture and confirm that she's ok with him going home on 1L of oxygen (they typically don't release these kind of kids on such high amounts of 02 apparently) - there's a chance she could say she wants them to do a cardiac catheterization here at the hospital first. If so, that would delay our discharge for sure.
4. Although Bodie loves to eat and is eating like a horse, he's not gaining weight and that's a big issue for cardiac patients - they're looking at increasing the amount he's allowed to eat as well as running a caloric test on my breastmilk to see whether they need to fortify with a higher calorie formula). Pray that they figure it out and he starts gaining quickly!

I would also like to ask for specific prayers for the following heart kiddos:
1. Isaac, Bodie's roomie - he is struggling with oxygen saturation levels as well and they can't figure out why. Please pray that his lungs would heal and the doctors would be as stumped by his progress as they were by the cause of the oxygen requirements to begin with!
2. Jacob, a sweet baby boy born Tuesday with HLHS. He is having a particularly rough start, as they discovered after birth that the HLHS had done a number on both his lungs and kidneys in utero. They're fighting a lot of complications preventing them from even getting to his Norwood surgery at this point. He has already been through such much - please pray that he continues to be a fighter and that he can get to surgery soon! Pray also for his mom Kathy as she deals with all of this all while recovering from a c-section.

Thanks as always for your prayers and good thoughts!
Love,
Dusk & Amy
Posted by Amy Bennett at 1:26 PM