God's hand on our son 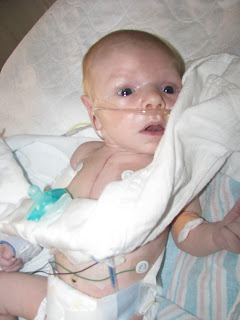 Wow - we have definitely witnessed God's hand on our son in the last 48 hours. In my last post, I mentioned that Bodie was doing well on his oral "nectar" feeds. Apparently, "well" is an understatement. On Friday, the OT put in orders for Bodie to get 2/3oz by mouth every other feeding (about 1/2 his "full feed" amount). Well, by Friday night, they had increased it to every feeding, and by Saturday morning they had increased it to his full feed amount! He is now taking all feeds orally! And let me tell you, the kid LOVES to eat! He is taking about 2oz at a feeding now and sometimes more in between feedings if he starts to fuss for more! Because of this, they removed his ng tube and canceled his g-tube insertion (which had been scheduled for tomorrow morning at 7am)!!! It is an absolute answer to prayer! He's gaining weight (as of this morning, he's now above his birth weight - and almost over 8 pounds - YAY!!!) The nurses yesterday were astonished at how well he likes the bottle - and one of the nurses today said she'd never seen a hypoplast eat so well so quickly (usually, hypoplasts just don't have the energy to eat well - and that's especially true for nectar feeds, since it takes more energy to suck and swallow down a thickened fluid). If he keeps doing so well with his feeds, he'll be able to do complete bottle feeds at home! PRAISE GOD! We know that this is a direct result of the specific prayer we had asked for, so thank you for all of your diligent prayer!!!
As always, we still do have specific prayer requests:
1. Pray that he continues to be such a rock star with his feeds! Pray that he keeps his energy up to keep doing the nectar feeds (it can take a lot out of these kids).
2. Although he is taking his feeds great, there is some question about how to get his meds down. Since they are thinner substances, he can't just take them orally for fear of aspiration. We may try mixing them with his bottles, or thickening the meds, to reduce the risk of aspiration. Or, they may put the NG tube back in solely for his meds while he's still in the hospital. We should know more tomorrow when we have our OT consult. Pray that he doesn't have to get the stinky NG tube back in!
3. He is still having saturation issues (although not badly enough to earn himself a trip back to the CTICU just yet, thankfully!) and they can't quite figure them out. Right now they just have him on a oxygen and that seems to help - but it sure would be better if they could figure out the problem and try to fix it (rather than just send him home on oxygen).
Also, Bodie's roomate Isaac is doing better with his feeds (and I think bottle feeding is not too far off in his future!). Please keep praying for him - here is a picture of the cute guy so you know who you're praying for: 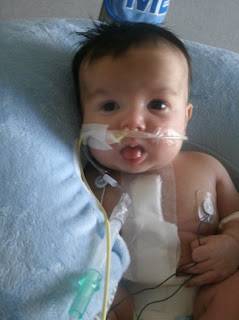 Thanks as always!
Amy
Posted by Amy Bennett at 4:34 PM