One prayer answered; still working on the other one 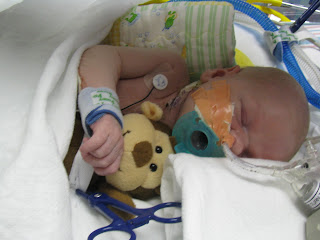 Good news first! I got to hold Bodie AGAIN today! It was SUCH a great feeling - and he was looking at me for part of it and I was able to determine that his eyes are definitely a beautiful light blue! While I was holding him, he went into a SVT, but his pressures were remaining stable, so we weren't quite as panicky as we were yesterday about it. Then, a few minutes later, the doctor at Children's who specializes in heart rythyms and the electrophysiology side of things happened to be in the unit looking at another baby in our room. (He usually rounds at least once a day through our unit, but he happened through at a different time.) Our nurse mentioned to him what Bodie had been doing and he was asking her questions about the SVT (how high Bodie got, how long it lasted, what his pressures did, etc.) when Bodie did it AGAIN! It was such great timing because he got to see EXACTLY what Bodie was doing. He watched for a bit (during which time Bodie went into another SVT - the third episode in about 10 min!) and basically said he isn't worried about it! It was such a relief to hear it straight from him!!! He said it doesn't hurt Bodie's heart to do it and we can just watch it. Apparently, people with congenital heart conditions, especially ones like Bodie has, are more susceptible to SVT's and some grow out of it. Sometimes it's just caused by an extra nerve in the heart. But since Bodie's doesn't get that high and his pressures are fine, it's not troublesome. If he keeps having it, it seems we can manage it with low-dose meds if need be. That was SUCH an answer to prayer for us!!! So thank you for all of your prayers last night about that!

On the other end of things, please keep praying for Bodie's sats and pressures to get better and his lungs to clear so that he can be extubated. His sats were great all night and into this morning and he passed all of the tests, so they were about to extubate him - until they checked his chest x-ray, which showed more fluid since the day before :-(. Then his sats, pressures, etc. were down in the afternoon and we were very clearly told that they were going to focus on getting the extra fluid off before doing anything else and that extubation was still at least a few days away. I was really disappointed, but understood - we don't want him extubated just to have to re-intubate him. But I just got off the phone with the night nurse, who told me that his sats and other vitals look good and they're hoping maybe to extubate tomorrow. But she confirmed that he hadn't lost any more fluid, so it kind of contradicts what we heard earlier today. So this is all to say that we just don't know what to expect and when he will finally get extubated. Such is the life with a heart baby, I'm discovering. As we keep saying, we're working on "Bodie Time." So, please pray tonight for Bodie's lungs to clear - and for us to have patience until they do so!
Posted by Amy Bennett at 8:54 PM