Bodie says "they're doing WHAT to me today???" 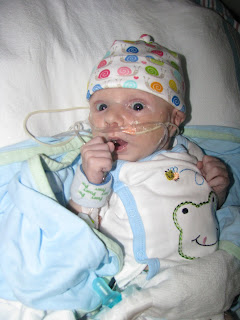 Bodie needs some directed prayer today. Yesterday, he was evaluated by ENT. They put a scope up his nose and down the back of his throat to evaluate his vocal chords. Besides the fact that he went absolutely balistic and it took me 45 minutes to calm him down afterwards, the news wasn't exactly fantastic. Although it appears that his vocal chords do close, he has left vocal chord paresis (not even sure if I'm spelling that right). Basically it means that his left vocal chords aren't moving. I don't believe it's much of an issue from "will he ever be able to speak?" - from everything I've heard, most of these kids with vocal chord paresis outgrow it (or learn to compensate for it - they may just have a raspy voice). It's not an uncommon complication both from his intubation and from cardiac surgery in general (the nerve that controls the vocal chords runs around/through the heart). And let's face it, as long as I know his voice will come back eventually, it's not the end of a world to have a newborn that can't screem too loudly! :-)

It is, however, problematic from a feeding perspective, since there is such a risk of aspiration. The ENT has referred Bodie for a swallow study at 1pm today, during which time they'll give him a little bit of breastmilk in a bottle (mixed with barium) and do a constant x-ray to see where it goes. If it turns out it is aspirating into his lungs, they will most likely recommend putting a g-tube in. That's a feeding tube directly into his stomach. The advantages are that it is essentially like a button (or a very short tube) that you take the cap off, insert meds and food (I assume through a syringe) and then cap it off - so he doesn't have any long tubes or anything, can wear normal clothes, etc. The disadvantages are that it is a surgical procedure (so he'd have to be put under to have it inserted) and the biggest disadvantage - I won't get to breastfeed him. This is a really tough thing for me personally since it was such an amazing bond I had with Sierra and it is just something that I'll have to work through. The most critical thing is that Bodie gains weight and doesn't have any respiratory issues between the first and second surgeries. And the g-tube won't be permanent - the cardiologist told me most kids are able to have them removed by 6 months or a year.

So, Bodie needs your prayer this morning specifically for the following:
1. Pray that he can tolerate the swallow study - to do it, I think he needs to be able to take 10 or 15 cc's - when we met with the OT Friday, she stopped him after 5cc's because he was gagging and she was concerned about aspiration.
2. Pray that the swallow study shows that his gagging is NOT aspiration, but instead perhaps just a reaction to his ng tube and that he CAN take bottles and try nursing.
3. If that's not God's plan for Bodie, pray for patience for Dusk and I as we adjust our expectations for feeding our sweet boy.

Also, please pray for Bodie's buddy Isaac - he's having kind of a rough morning and struggling with a lot of the same issues Bodie's been struggling with (low sats, feeding issues, morphine addiction, etc.) - his parents are such awesome Christians and have already ministered to me on my rougher days. Pray for miracles to abound today for both Bodie and Isaac!!!

Thanks - and I'll update after the swallow study.
Posted by Amy Bennett at 8:39 AM