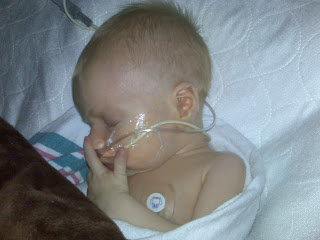 Bodie had his swallow study yesterday, and, if I had a picture perfect way I would have liked it to go, that wouldn't have been it. First they gave him nectar, which he did great with (they let him do 10 swallows and it went exactly where it was supposed to!) and then they gave him a bottle of thickened breastmilk. The OT doing the study turned her head for a second as she gave him the bottle and then turned back around, screamed "Oh my God!" and jumped back as we watched on the monitor as Bodie aspirated most of it into his lungs. I did NOT need to see a professional react that way. She actually apologized to me, saying she had been unprofessional, but the damage to my pschye had been done, I'm afraid. All told, I was left with 2 distinct impressions: (i) my kid can tolerate "nectar" (too bad I don't have the slightest clue what the heck "nectar" is - I just have visions of bees and flowers, but I'm guessing it's not the same kind of "nectar") and (ii) my kid must have had the worst case of aspiration the OT (who looks at this kind of stuff everyday) has ever seen. A bit unsettling to say the least.

Then, the other OT came by a bit later to talk about the study. After apologizing for the reaction that the testing OT had, she said the study was actually good news. Yes, he aspirated on the thinner fluid, but she had expected that given that he had gagged when she had tried giving him a bottle. But it's good news that he took the nectar without aspirating, as some kids can't even tolerate that (turns out the nectar is basically breast milk mixed with a gelatin, so it goes down more slowly and his body has time to adjust and close the trachea), which means we can feed him a bit by mouth. We can't just give him all nectar because it takes too much work for him to suck and swallow it, so there's no way he would have the energy to take in all the calories he needs to grow between now and his next surgery. So, yes, it looks like he will need a g-tube. I'm bummed (especially since it means breastfeeding is definitely out on account of it literally endangering the poor kid's life), but we knew it was a possibility. They did an upper GI study on him this morning, which I guess is the next step in the g-tube process (don't know the results yet, but no one screamed "oh my God" and jumped back, so I take that as a good sign).

I believe the plan is for the OT to work with him to figure out how much he can tolerate by mouth and then give him the nectar by mouth and then give the bulk of his feeds via the ng tube (for now) and the g-tube (once it's in). The good news about that is it means we can keep stimulating his suck and swallow reflexes and simultaneously strengthen all of those muscles so that when his vocal cords do heal, he'll already be used to taking food by mouth and it won't be such a difficult transition for him. I think it's all designed to avoid an oral aversion (how's that for a tongue twister?). I think they plan to repeat the study again in 3 months or so. The other really good news is that, because his weak cry was what clued them in initially that there might be a problem, we won't necessarily have to wait until a scheduled study to see if he's improving - if his cry starts to improve, we could get visible signs of improvement that would clue us in to redo the study sooner.

And in humorous news (hey, we have to find it where we can), Dusk dug Sierra's old bouncy seat out of the attic, washed it, and brought it to the hospital yesterday. Bodie's been a tad fussy the last few days, but once we put him in the bouncy, it was like magic - he immediately calmed down and started satting higher! In fact, we let him sleep in the bouncy seat last night and his sats were so great that he was completely weaned off oxygen by the morning! (He's back on it since his sats went down again this morning, but it's good to know that he likes the seat and that his sats are slowly improving - and that he can be on room air again! His little lungs are getting stronger). Any parent will tell you that bouncy seats are magical (I had somehow forgotten that they had the same effect on Sierra), but, as the night nurse explained to us last night, they're particularly helpful with patients in drug withdrawal. You know how you see drug addicts on tv rocking back and forth when they're going through withdrawal? Well, apparently the bouncy seat has the same effect - so basically, when my kid is being soothed by his bouncy seat, it's because he's so strung out he needs a hypnotic distraction. I swear, I could make so much money setting up a rehab program for cardiac kids post-surgery (either that, or patenting the bouncy seat for adults)!

Anyway, as you can guess, we do have a few specific prayer requests for today:
1. Pray that Bodie's little vocal cords (btw, apparently I've been spelling "cord" wrong - how embarassing! Leave it to my musically inclined husband to correct me on that one!) continue to heal. He actually had a stronger cry this morning, which made me feel so good! I don't know that it will change anything in their planned course of treatment, but it would be so amazing if his vocal cords made a complete recovery before they ended up putting a g-tube in! It would just be so awesome to look at the stumped doctors and tell them that the only reason it happened was because of prayer! So, please keep those prayers coming!
2. Please continue to pray for Bodie's roommate, Isaac - the poor guy hasn't gotten much sleep the last couple of days since it seems like someone is ALWAYS waking him up to poke and prod him (but it is kind of funny since it seems like he exacts his revenge by pooping on them when they so do!). Please pray that they leave him alone for a bit and just let his little body heal.

Thanks as always, my awesome prayer warriors!!!
Posted by Amy Bennett at 8:36 AM